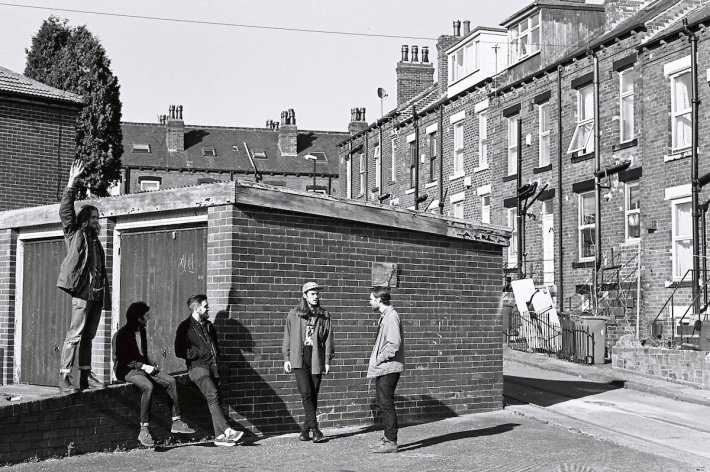 Named after the Japanese word for colourful autumn leaves, KOYO is also the name of a new group fusing colourful influences to create music of their own. KOYO formed in Leeds in 2015, and are Huw Edwards (lead vocals, guitar), Jacob Price (sampling, synthesisers), Seb Knee-Wright (guitars), Dan Comlay (bass) and Tom Higham (drums).

Their debut album marries psychedelic and progressive rock with electronic soundscapes. While unafraid to borrow from the past, theirs is a wholly 21st-century sound, drawing on influences such as Tame Impala, Boards of Canada and Live At Pompeii-era Pink Floyd.

KOYO came together after their 22-year-old co-founders, Huw and Jacob, moved from their native Kettering to study in Leeds. “We’d played in a few bands back home and our bandmates were supposed to move with us – but didn’t,” says Huw, “so we started playing around with something different. As time went on we got carried away; going back and changing things; adding in drum parts and experimenting with electronics.”

Growing up, the pair gorged on ‘90s grunge and alt.rock (Huw: “I loved the melodies and harmonies of Alice In Chains”), but also their parents’ classic rock and prog-heavy record collections. Huw remembers dancing around to Black Sabbath’s Iron Man with his dad, and Jacob underwent a similar indoctrination. “When I was 10 I was taken to see Rush,” he says. “I had my mind blown for three hours – and I even got to meet Geddy Lee and Alex Lifeson.”

Moving to Leeds, however, expanded their horizons, which, in turn fed into the new music they were writing. “There’s an eclectic musical scene in the city,” says Huw, “so suddenly we were surrounded by all kinds of musicians and discovering stuff that hadn’t been played to us by our parents.“

The duo’s influences soon expanded to include electronica and post rock, ranging from Floating Points to Mogwai, via Brian Eno’s landmark ambient albums.

KOYO songs such as Tetrachromat, Jettisoned, Lost in the Kingdom and What is Mine are the product of these influences. But stamped through with the group’s own personality.

“All these songs are inspired by our real-life situations,” explains Huw. “Things like the fear of how serious life can sometimes seem. It’s all about the human experience.”

Having appreciated they couldn’t realise their music’s full potential on their own, the duo didn’t have to look far. Enter: bandmates Seb, Dan and Tom: “Now we could play our music live and take it in a different direction” says Jacob.

KOYO recorded their debut album at Foel Studio, a country retreat 15 miles from civilisation, aka the mid-Wales bordertown of Welshpool. Hawkwind, My Bloody Valentine and Ozric Tentacles are among those who’ve recorded there. “It has a great prog history,” points out Huw. “It’s in the middle of nowhere and you can imagine these bands sitting around recording barefoot in the fields.”

The rural setting quickly found its way into KOYO’s music. “There are the sounds of five or six animals on the album - the studio’s cats and a cow,” grins Jacob. “We used the cats in the soundscape at the beginning of The Beauty of Loneliness, but they’ve been manipulated beyond recognition.”

Meanwhile, Jacob’s course in music production introduced him to Ken Scott, the man who’d engineered The Beatles’ ‘White Album’ and co-produced Bowie’s The Rise & Fall of Ziggy Stardust…, and who influenced the production of KOYO’s album without realising he’d done so.

“Ken Scott was a visiting lecturer at the university,” explains Jacob. “So I spent a day a week for six weeks, where he’d show me how he records drums, bass and so on.” Jacob watched and learnt as Scott dissected multi-track sessions for Bowie and Beatles songs and Lou Reed’s Transformer album.

“We wanted to take a relatively old-school approach to making the album,” continues Jacob. “The beautiful thing about those classic albums is you’re listening to a real live band and the sound they’re capable of creating in that moment. But the key is also to do something new.”

KOYO’s debut album is slated for release in 2017. Their journey is just beginning. “The last time I went to a festival,” says Huw finally, “I said, ‘Next time I come here I want to be playing.’ That’s our goal for now.”