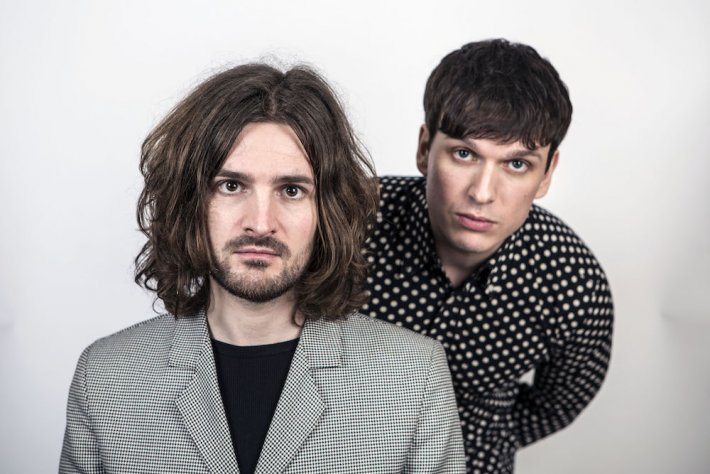 We Rise is the second album from Morrissey & Marshall and will be released on XX May 2017 through XX Records, preceded by the single, the opening track of We Rise, “Cold November Sunrise” which sets the tone with a whipcrack beat and dive-bombing psychedelic guitar riff augmented by a horn section fanfare. This whole collection is shot through with the shimmer and sunshine that evokes the very best harmony-driven acts from The Kinks to The Beach Boys to The Beatles to The Byrds blended with an energy, bite and verve all of their own.  Having supported Sinead O’Connor and won over Shane McGowan and Cillian Murphy, Morrissey & Marshall are the real deal.

Whatever happens next, the band are already owners of two of the biggest names in rock, a coincidence which prompted one wag to suggest that they might sound like “a heavily-amplified Smiths gig”.  The wild-eyed, long-haired singer, guitarist and songwriter Morrissey smiles at the reference. “We have never pretended to be anyone other than Darren Morrissey and Greg Marshall. It’s who we really are.”

Morrissey & Marshall arrived in London from Dublin with two acoustic guitars and a headful of shared dreams. They set about hauling themselves up the hard way.  “You get to learn that the world is a big place,” says Marshall, the neater-looking, more contained harmony singer and lead guitarist. “You start with nothing, which is a great way to learn your trade. And really, it’s been the best time ever!”

While their debut, And So It Began, won them plaudits as the finest pair of harmony singers to have emerged for decades, Morrissey & Marshall have now upped their game yet further.  The pair sing with empathy and instinctive timing: there is more to close harmony singing than simply hitting the right notes. “Greg and I have lived it together,” Morrissey says. “There’s a chemistry and a bond between us that goes beyond music. We’ve gone through it all together.”

The album winds down sonically, while reaching a new peak of emotional intensity with “I Need You”, a simple piano ballad which Morrissey describes as “the heaviest song on the album”. An elegy for one of his best friends who died at the age of 25, “I Need You” is written from the viewpoint of his departed friend’s fiancée, whose emotional devastation at the funeral was overwhelming. “When we recorded this, I was actually crying when I was singing that song,” Morrissey says. “In the second verse you can hear the voice is breaking.”

“The Light Breaks” a short, beautiful, acoustic coda rounds off the album with a sense of calm and closure. The band has left the stage. Morrissey says, “It’s just Greg and myself, back to where we started, to finish it off”. They’re not finished yet… not even close.