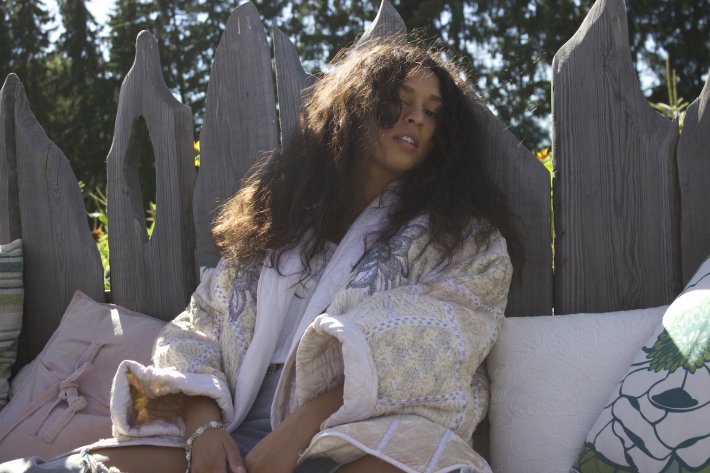 Nadia Nair is a quietly eccentric songbird from Gothenburg who has been under the radar for awhile now. It's been almost 3 years since the release of her first ep The Bon Voyage ep. She was praised for her deeply personal voice and lyrics along with her own way of mixing blues with electronic elements and organic rock. A Nina Simone-Jimi Hendrix-Björk clash. Controversial musicvideo for her track Monika The Brave gave her recognition in swedish newspaper for being the bloody revenge of a rape victim Monika and swedish radio made it heard. Her comfortably floating raw sounds combines both her worlds, and she is introducing us to a new sound. She has stated that culturally and musically she has never belonged to one box and it has never disturbed her. However, dissatisfied with the expectations that came from within those boxes she left the orchestra and local band scene during her teens to get into music production and see what she could do with it. Armed with minimalistic violins and unique, deep and playful vocals she experimented her way from her homestudio to myspace. This along with her childhood therapy-writing poetry-pushed her into the world of spoken word, a love affair ever since which fueled her lyrically and so she moved to Stockholm to write for herself and soon enough found herself being asked to write for other artists.

A couple of trips inwards into darkness, silence and soul resulted in jamsessions with her friends Johan Jonasson and David Axelsson (Milano Sun) where she dropped her final bag. For Nadia it’s always been about the clash, atmospheric guitars, which borrows tones from oriental scales, chaos creates harmonies, hard 90’s vibes meet warm tropical vocals, bass heavy beats are fed with raw soul and mantras. Her self-released single “Beautiful Poetry” paints the ugly and there is always room for more or less in her vessel. The one she has carried as a home from the chilly north of Europe to restless childhood summers in Malaysia. And with the release of her new music video “Beautiful Poetry” directed by herself and Dohnberg, we get to see her jovial spirit which quickly grabs your attention.