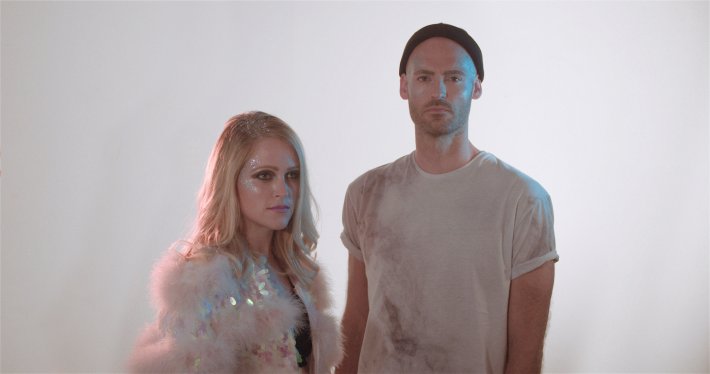 East-London-based Polychrome, who channel the spirit of Cocteau Twins with the electronic ecstasy of M83, are made up of Oliver of The Bronze Medallists and Victoria of Victoria and Jacob. Victoria and Jacob have been championed by the likes of NME, Time Out, The Line of Best Fit, Uncut and DIY to name a few, and have also supported The Mystery Jets, Com Truise, Daughter, and Katy B. Oliver, frontman of indie electronica band Bronze Medallists (also solo performer/activist Olly the Octopus AKA ‘Boris Johnson’s Nemesis’ – City AM), has worked with the likes of Lucy Rose, Mt Wolf, L.A. Salami, and been supported by Radio 1, Radio X, Radio 2, and 6music to name a few..

Polychrome now release “Dreaming About You”, off the upcoming self-titled debut album ‘Polychrome’. With it’s warm, thick synths, the new single paints a prismatic terrain and allows us to explore more of the expansive, hued landscape of the album. It opens with high-end, dreamy frequencies, and when the bass, percussion, and both Victoria and Oliver’s vocals join it’s an interlacing marriage that makes heads bob..

Victoria studied Creative Music Tech in Cambridge and has contributed a large amount of the production on the album. Victoria feels that there is still a long way to go for women in the music industry; she wants to inspire more young women to get into production and engineering roles since these are typically male-dominated..

Much of the Polychrome album was written in isolation at Grianian Eco Lodge in Scotland – close to Oliver’s hometown. The band took some time out to focus here. Inspired by the incredible landscape and isolation, the duo feel their sonic soundscapes are massively influenced by the Highland views, rivers and incredible mountains.