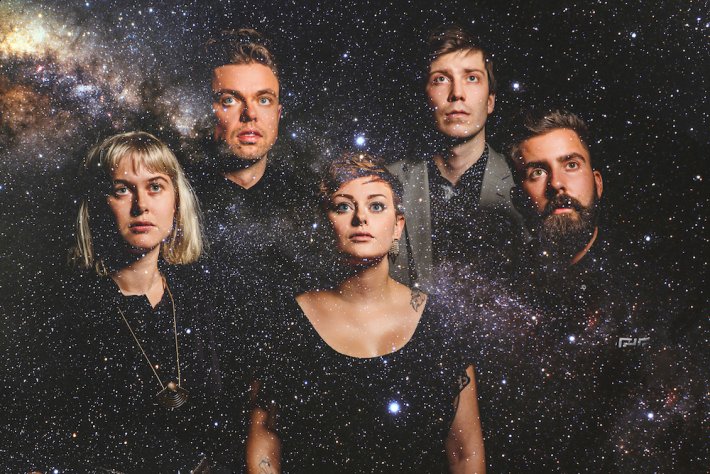 After a successful export of bands like Arcade Fire and Half Moon Run, Canada yet again distributes their latest musical pride to the world in the form of Rah Rah. Rah Rah quickly became the masters of slacker-power-pop by being voted Canada’s Best Alternative Band, as well as having their previous album put forward for the 2013 Polaris Prize. Now the band are finally ready to release their much anticipated new ‘Vessels’ LP with the hope it will outshine its predecessor.

Be Your Man is an edgy opener that swiftly whizzes the listener straight into the realm of quality music topped with the flawless 50s/60s-esque female backing harmonies. Different parts of the song make one reflect upon the works of Roy Orbison, Bob Dylan as well as Razorlight or The Lumineers. The comparisons, however, don’t end there…

Chip Off The Heart is the lead single from the record. With its firmly held indie-dance backbone it sounds like the unusual lovechild of Mando Diao’s Dance With Somebody and Le Tigre’s Eau D’Bedroom Dancing. Fix Me on the other hand, brings in a tone of hooky melodies resembling HAIM, The Bangles and The Pierces, whilst adding to the already rich pallet of Rah-Rah’s sonic knacks.

What’s very special about Rah-Rah is the fact their sound simply cannot be pigeonholed. Each one of the 11 tracks on the LP can be associated with a long list of very eclectic artists yet always upholding Rah-Rah’s individuality. All I Got Is Today for example is poignant towards Bob Dylan, Mystery Jets and topped with the Lucius-esque powerful harmonies, yet Diamond brings in the Suede-like murky glamour into the mix whilst still maintaining their native Rah-Rah-ness.

The penultimate track called Surgery also calls in for immediate attention. Why? Because the image it portrays very vividly when listening to it is Interpol doing a fast-paced indie duet with ABBA inside the famous Studio 54.

Rah-Rah have clearly mastered the power of sonic freedom which they assimilated with every bit of every song on the record. In other words, Rah-Rah are destined to turn many heads and ears with their upcoming ‘Vessels’ LP which will be out for sale and download everywhere 20th November 2015.