All Tvvins discuss their new album, touring plans and why they are sharing their new record one single at a time

All Tvvins discuss their new album, touring plans and why they are sharing their new record one single at a time 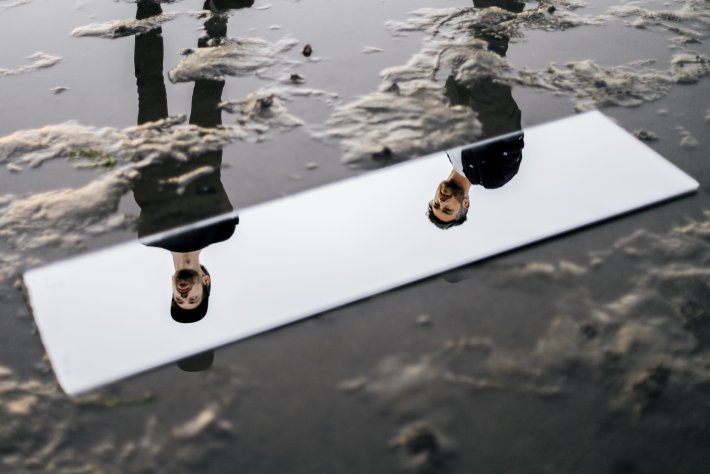 After first emerging back in 2016 with their heavily-praised debut album 'IIVV', All Tvvins quickly became one of the best undiscovered talking points of that year. With a release that blended electro-pop, post-punk and straight-up indie-rock, the group's unique direction was as captivating as it was original. Now returning with their second studio LP, we sat down with Lar Kaye and Conor Adams from the group to discuss their plans, new material and what they hope this year will bring.

Hey! We're great; it's been super busy releasing singles and getting ready for the tour. We're preparing for our new album to come out and we're really excited to get out playing live and meeting new people again.

You released your debut album ‘IIVV’ back in 2016 to huge acclaim and success, and are now set to drop another one. Do you feel you took a different approach to recording this time around, or were you more comfortable having been through the process before?

I think there was a pretty big difference in the way our first record and our second were assembled, written and recorded. IIVV was a combination of many studio sessions between London and Dublin, several producers and years of accumulating demos. We were signed to a major label and I guess major things were expected of us... and rightly so. It afforded us budgets to try different studios and take our time choosing the right ten songs out of the sixty plus that we had written. That threw up its own difficulties for us because it really stretched out the time of conception to release which was somewhat frustrating... nobodies fault, just the business of it all.

With 'Just To Exist' we worked with one producer; the amazingly talented James Vincent McMorrow. We wrote the bulk of the music in a two-month time frame and worked in two locations in Dublin; a cavernous room above the National concert hall and a quaint little studio by the canal. Working on the second album like that was very satisfying in terms of the process being quick and fresh. James is primarily known for his beautiful voice and songwriting, he went above and beyond to pull everything musical out of us. He’s got an amazing ear for sounds, textures and layers and his work ethic is commendable. I would describe as the hardest working man in music. I know we came away from the whole experience having upped our output by at least double.

And how about the sound of this new record? Would fans of your previous work recognise it or do you feel like you have tried to create something different this time around?

We feel that we have evolved as individuals since our last album and that that is reflected in the sound of our music as a pair (a trio in a real sense including James as he wrote the songs with us). I'm aware that some people who like the first record might not like our second as much ... and there’ll be those who like the second better.... but I think that's the point. I’d hate to make a record that sounded like something previous, for that could only indicate stagnation.

As we grow and change so do our tastes. That's not to say we are completely different people or are a different band... we’ve just got a new set of tools.

You have also decided to drop singles on a weekly basis in the run-up to the album’s release? Can you tell us why you decided to preview the record in that way?

I think the way a lot of people digest music in this modern day has evolved. I speak from a personal perspective here. I used to be “an album guy”. What I mean by that is that I used to ignore an artists or bands singles until the album was released. I had this wider opinion that the songs only made sense as a whole and I didn’t want to skip ‘that song I was bored of already’ when it came time to enjoy the whole record. And when the album finally arrived I would pour over every song without any bias.

For me, streaming changed all of that. I found myself with a way bigger pool to dip into and less time to do it. So I started dipping into songs as opposed to albums. Now when I hear a great song I’ll investigate and listen to the whole album. I still think the album is a beautiful body of work that shows an artist or band in a specific time of their lives and still thinks its a necessary and wonderful thing. It's great to put on an album and get lost in a certain feel and mood, a mood dictated by that artist. Playlists are great too... I suppose we live in a time where all listening habits are supported and that can only be a good thing...right?

Getting back to why we’re putting out the songs before we piece the whole thing together... I think it’s just an exciting way to give people a taste of what's coming. Almost as if the songs themselves are trailers for the bigger picture; the album as a whole, to be listened to at once and enjoyed as a feeling or mood for forty odd minutes.

And are there any singles that you are keen for your fans to hear?

For us, it's I Heard You. We just feel very proud every time I hear it, the sounds, production, lyrics and vocals all just really came together in a special way. Every time we hear it, we wonder how did we make this and where did it come from ha!

Your new album ‘Just To Exist’ will arrive in April, and so what do you have planned as far as live performances go? Are there any gigs that you are particularly looking forward to?

We're playing our biggest ever headline show in the national stadium in Dublin which we are really buzzing for. It's an amazing venue with so much history so it's going to be a really special night for us and we wanna put on a big show. We're off to tour Europe and the UK in May and then we're back in Ireland for some big festival shows and supports so it's gonna be a busy few months for us. Having toured just off one album, it's gonna be cool to mix up new and old material for the first time.

And what about for the year ahead? Do you have any further plans for yourselves once the album has been released?

We want to get out and play the record to as many people as we can as we are excited to see where this album will take us. We're living in a time where you can track and upload a song in the same week pretty much so we're both always writing music and recording everywhere we go. We're both really excited to see what happens!

Finally, what would you say has been the most memorable point of making this album? Were there any times when you just knew you were onto something special?

Definitely having James as a producer was the highlight! We're lucky enough to have worked on one song with him before, but to work on a full album together and co-write with him was so cool. The man's work ethic is next level and he is super talented. We both learned so much from the experience and we all put everything we had into the process and we couldn't be happier with how it turned out.

As soon as we worked together for the first session, we came out with Hell of a Party It was a massive boost of confidence for us and we needed it, as each track progressed I knew we were making something special!

All Tvvins' new album 'Just To Exist' is due out on 12th April, and will also be taking to the road in May for a short UK tour. Check out the full list of dates and listen to their latest single 'Build A Bridge' in the player below.

2 hours 53 min ago After delighting us with a flurry of warm and enticing releases these last few months, James Vick

3 hours 9 min ago After establishing himself with a flurry of releases throughout last year, fast-rising artist Tot