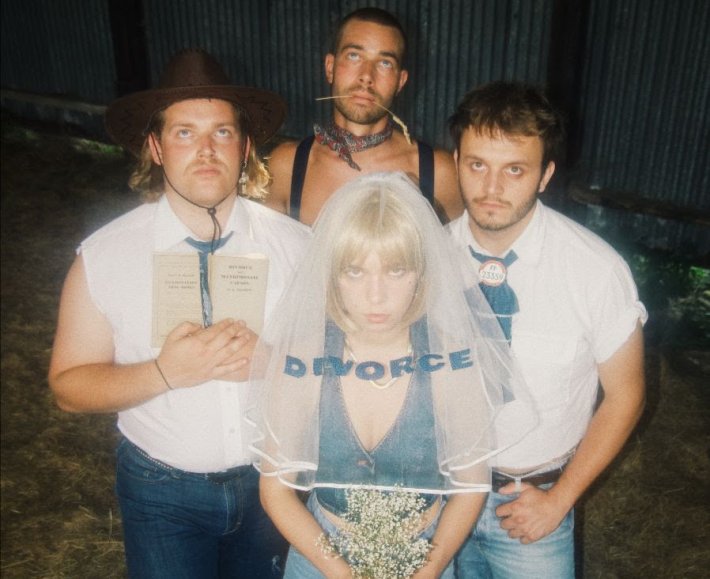 After breaking through with their adventurous alt-country offerings 'Services' and 'Pretty' in recent months, Nottingham-Based newcomers Divorce are now ready to cement themselves with their newly announced debut EP 'Get Mean'.

Featuring the recently unveiled single 'Checking Out', the group's latest gem sees them explore more of that bold and riveting direction they are cultivating for themselves. Blending a heady mix of country-inspired textures with a driven indie-rock aesthetic, they have a sound unlike anyone else right now.

Speaking about the new release, the band's Tiger Cohen-Towell said, “The track was written when a group of musician’s friends and I did a songwriting exercise, the challenge being to write five songs in five days. I think it was maybe the 4th day of the process and I wanted to write something that was as far away from myself as possible, I was tired of my own personal narratives.

"I’ve always loved dramatic country and western ballads and a major inspiration for the track was country-singer Marty Robbins, who writes the most intense ‘gunfighter ballads’, which are bordering on slap-stick in their incessant violence and all-American heroism. I wanted to flip that on its head by having a female narrator who feels justified in her heinous act because those gunfighter ballads make you root for the underdog anti-hero, even if they are behaving completely irrationally — that’s a running theme in country music I think. ‘Checking Out’ is satirical and humorous, whilst getting into the head of a person who has been pushed too far and had enough of mistreatment in a relationship (although I don't condone murder!)”

Divorce's debut EP 'Get Mean' is set to be released on the 2nd December via Hand In Hive, and you can check out the new video for 'Checking Out' in the player below.

7 hours 19 min ago With her eagerly-awaited debut mixtape arriving later next month, Biig Piig has now dropped the n