Atreyu are missing their frontman, but that hasn't stopped them from crushing their European tour

Atreyu are missing their frontman, but that hasn't stopped them from crushing their European tour 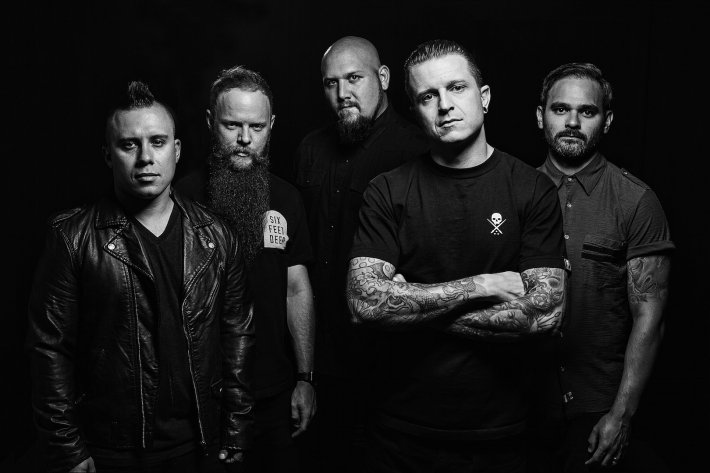 At the end of last week, it was announced that Atreyu frontman Alex Varkatzas would not be touring with the group on their current European tour. Despite only 48 hours notice, the Californian metalcore outfit made the difficult decision to head off without him, recruiting other members of the band to fill in. So with their current tour now underway, we caught up with the group's bassist Porter McKnight at Slam Dunk Festival over the weekend to find out exactly what happened, how they are coping, and what they have in store for the weeks to come.

Hi Porter, how are you doing today?

How was your set in Leeds last night?

It was awesome actually, pure chaos. We’re here in a weird state because our frontman Alex is not with us. On doctor’s orders he was told not to come. He has an epidural in his spine yesterday due to his really bad back problems. He has to have surgery, which we are hoping to push back to our break in September. So we’ve only had the last few days to prepare for these shows. So we got our buddy Kyle, who plays in Hell Or High Water with our usual drummer Brandon, to play drums, and Brandon is now the frontman and I’m doing all the screaming vocals.

And how are you finding that?

It’s great. It’s really, really fun. I mean it’s sad that Alex isn’t here but it sounds awesome. Yesterday was fun as we had a couple of guest vocalists coming up, so I jumped in the crowd to start a circle pit and got smashed in the face and had my lip busted open by the camera. But it was all fun! I’m looking forward to today though. The first one is done, so we can now take a step back, be a little more present and enjoy this.

So was last night your first show without Alex?

Yeah, it’s the first time we’ve ever done it. We had our first rehearsal up in York a few days ago and it was very different to how we normally prepare for shows.

So has this been an excuse for you to bring out guest artists during your sets?

Yes! It’s helping me out as well because it’s a lot of lyrics. Of course the songs that I need to learn and sing are like paragraphs of lyrics, so I’m like “Yeah bring them on for that song!” But that’s find because it gives me a couple more days to remember everything I need to know.

But obviously when you are doing a festival show, you have to create a setlist that is spanning your entire discography. You have seven records and you need to find that middle ground between your fans and those who may have never heard of you before. So do you bring out more new material or do you stick mainly to the classics?

No. We have the mainstays of like ‘Right Side Of The Bed’. I’ve been in the band for fifteen years and we’ve never not played that song. We have the hits that can’t not play. But we do have three new songs from the new record because ‘Time Is Now’ is a really big single so we want to play that. There is one from that record that we really love as well but I don’t want to say everything because we want their to be some surprises as well. But the set so far has been doing over really well.

So have you been touring this album regularly since its came out?

Yes, the last set we did we played four tracks from it, and the one before that we played three. It’s tough though. You don’t want to deprive people of songs from the first record but also we have so many songs! We look at Spotify and try to factor that data in a little bit, where we have our top twelve songs and we could just play those, but we want to try and please everyone. For instance, we have a song called ‘Her Portrait In Black’, which is the one song people always ask us to play. So finally we thought, yeah let’s play it because we love playing it too. Played it the first two days of tour, and they just stared at us. So we thought, yeah let’s just yank that one out.

Yeah, you have to try and please the crowd as much as possible as well as keeping yourself happy by not playing the same songs everyday.

Exactly. I think we do that a lot.

So how long is your current tour going to be?

It’s only a short European tour, essentially bookended with Slam Dunk and Rock Am Ring. So we go to Norway, Sweden and the Netherlands as well as our regular shows in Berlin, Hamburg and Budapest.

Are there any places you haven’t played before on this tour?

We’ve never been to Norway in a club. We played a really rad festival called Hove there about ten years ago. So most of these are really seldom-played placed for us. But we are just so stoked to be back in a fun, club-based environment where we can just build on what we have.

Going back a few years, you guys went on hiatus for a while. But since returning you have released two studio albums, so do you think the break was needed?

Well we call it a pause button. But I think that was good for us in an infinite amount of ways. Like I said, I joined the band fifteen years ago but the rest of the guys pretty much went to high school together and have known each other for a very long time, and only really knew each other in the touring facet. I did school, went to college and had a little bit of my own life before I started this, so these guys needed time to experience life outside of being in a travelling band. And we did and it was great for everyone. We came back hungrier and love it more than we ever have. In our eyes, this new record is the best thing we have ever done, we love these songs and we love playing everyday. It is stupid at just how amazing this is and how grateful we are that we get to do this as our profession. It is just so cool!

Very jealous of you guys right now. But you guys have your tour that you are currently on, but do you have anything scheduled for the rest of the year?

Yes. But I can’t talk about any of it. None of it is out or mentioned yet.

But is it more touring or recording you have coming up?

We also have fun things in mind for those too. So we fun things coming in every capacity, facet and form.

Atreyu are currently on tour throughout Europe, and their latest album 'In Our Wake' is available to stream and download now. Watch the video for their latest single 'The Time Is Now' in the player below.

5 hours 22 sec ago After delighting us with a flurry of warm and enticing releases these last few months, James Vick

5 hours 17 min ago After establishing himself with a flurry of releases throughout last year, fast-rising artist Tot