Their new album 'Hellfire' is out next month 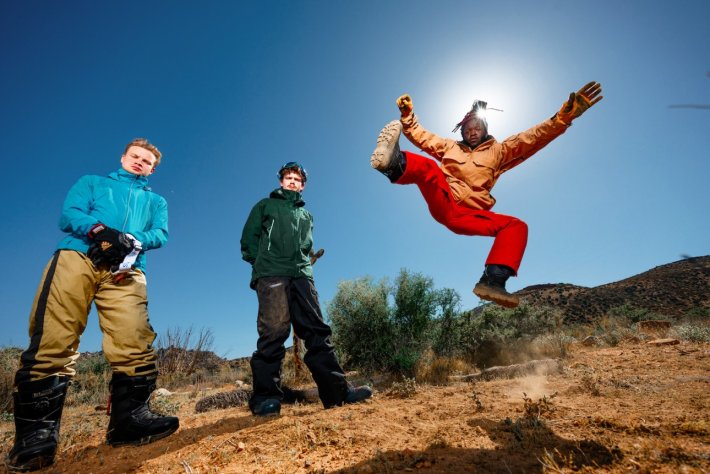 With their eagerly-awaited new album now just a month away, Black Midi have dropped the next cut to be lifted from their forthcoming full-length.

The new single 'Eat Men Eat' comes accompanied by a brilliant new video, directed by Maxim Kelly, and follows on from the previously shared lead track 'Welcome To Hell' in previewing their new LP 'Hellfire', which is out on the 15th July via Rough Trade Records.

Speaking about the new offering, bassist Cameron Picton said, "The story starts in the desert with two men engaged in a desperate search for missing friends. Their quest leads them to a strange mining facility which, despite a dearth of natural resources in the area, opens its doors for even stranger hosts to welcome them.

"That evening, with zero sign of their friends, a massive feast is laid on by the mine’s cantankerous Captain, who performs a long speech encouraging all to indulge as this is to be the workers’ last night before returning to their families. With good reason for suspicion the protagonists feign gluttony and consume as little as humanly possible. Unfortunately, as they later find, even that’s not quite enough. Night falls, they hide and as the workers fall comatose the wardens, overseen by the Captain, make preparations to pump their poisoned stomachs. It turns out the purpose of the mine is to procure an excess of human stomach acid used in the production of a bastardized blood red wine, sold and loved in the region.

"After the wider conspiracy is revealed and upon realising their friends must be long gone, the partners decide they must destroy the facility. A spanner plugs the works however, as one of the men experiences mild effects of the poison and the production of acid in his stomach goes into overdrive. As his chest literally bubbles he says what may be his final goodbyes to his partner and the other man is left to do the heavy lifting alone. He succeeds and as they flee, arm in arm, the demon Captain erupts from the burning embers and curses the two men to the hell of crippling acid reflux for the rest of their days. They see no reason to worry though, as they’re sure to return home hailed as heroes."

Check out the new video for 'Eat Men Eat' in the player below.

With her highly-anticipated new album landing in the coming weeks, Ezra Furman has now dropped yet another cut lifted from her forthcoming full-... 11 hours 26 min ago

Following on from the release of their highly-praised 2018 LP 'Ruins', First Aid Kit have now announced their plans for a new studio album, arriving... 18 hours 43 min ago

Following on from the release of their much-loved debut EP 'Gazebo' last year, Amsterdam-based outfit Personal Trainer have now announced their plans... 1 day 10 hours ago

After spending the last few months collaborating with the likes of Ibeyi and Mura Masa, Pa Salieu has now returned to drop a brand new single. The... 1 day 18 hours ago

Following on from the release of their much-loved LP 'Pressure Machine' last year, The Killers are back once again to share a brand new single.... 4 days 10 hours ago

Fresh from selling out the O2 Academy Brixton in an hour and landing a BRIT Breakthrough certification for her debut album ‘You Signed Up For This’,... 4 days 16 hours ago

Following on from the release of her highly-praised studio album 'rising' earlier this year, mxmtoon has now returned to share a brand new single... 4 days 18 hours ago

11 hours 26 min ago With her highly-anticipated new album landing in the coming weeks, Ezra Furman has now dropped ye