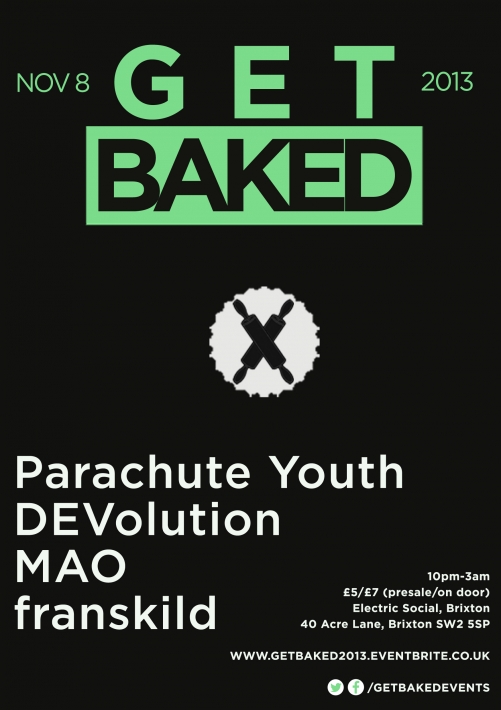 Gather round and listen up. Let us introduce you to the first of the GET BAKED series of events. Presented by The Bakery (The Bloody Beetroots, Benny Benassi, Parachute Youth) and Mystic Sons (www.mysticsons.com) this will be the beginning of a new era of electronic music events.

Hosted at Electric Social in Brixton, this will be your last chance of 2013 to see some of these up and coming electronic prodigies. With limited ticket space make sure you grab your advance tickets early!

► Headlining the first GET BAKED event will be the mighty PARACHUTE YOUTH in what will be their final UK appearance of 2013. The duo, hailing from Australia, are fresh off the back of a 25 date European tour starting April in Poland and finishing last weekend in Belgium having enjoyed a fantastic response over the last year after the dropping the single ‘Cant Get Better Than This’ in June 2013 on Warner Music UK.

The single was the most played track on Triple J in 2012 and the official video has had over 11 million views on YouTube, across all the uploads internationally, whilst also achieving gold sales in Australia and Belgium, going to number 1 in Australia, Belgium, Poland, Lithuania, Ukraine and Belgium.

In addition to this their new single ’Runaway’ is scheduled for release at the end of 2013 worldwide and rumour is the video is being shot this month...

► Main support comes from melting pot of electronic musical influences aptly called DEVolution. Another duo, this time haling from Southampton, are causing a stir (not for the first time) on Soundcloud with the new EP Transition.

Comprising of Pete Devereux, conquered the mainstream once before as half of Artful Dodger, and his fellow accomplice Tom Devos former artist from Size Records the pair have recently been championed by Annie Mac and Mistajam, recently signing to his label Speaker Box.

For those who may have caught the pair perform at Fabric Live earlier this month, it is evident their mission is to ignite venues with real bangers, proving just why getting them on the bill seems to be the new ’in’ thing.

► Next up on the bill is MAO, who have just completed their debut album, a mixture of sub bass, broken beats, R&B, shoegaze, lush strings & futuristic synths that expresses their ability to create beautiful & melancholic soul music that also thrives on the dancefloor. Vocals performances from Lulu James, 14th, Marin, Dems & Seasfire are the icing on the cake, injecting even more soul into their sound.

MAO are also working on their live show with Creative Artists Agency to tour the album; whilst focusing on music & live performance the show will also be visually stunning & based on the strong imagery they have created in the past.

► Last, but certainly not least we introduce FRANSKILD. Another duo (seems to be a theme here doesn’t there?) from Stockholm Sweden, this will be their ever FIRST UK PERFORMANCE!

Fresh off the back of releasing latest EP eden, FRANSKILD received huge support from the likes of MIXMAG, MUSIC WEEK and ELECTONIC BEATS to name a few with the single shards reaching 15,000 downloads in 5 days. Another artist signed to Sweat It Out Records, expect big things over the next 12 months.

Don’t believe us? MAYA JANE COLES recently requested a remix for her latest single which you can listen to here – http://youtu.be/S_LHWXK77N0

Happy? Then grab your tickets here:

4 hours 35 min ago With their highly-anticipated new album set to land in the coming months, Paramore have now unvei