Their new EP 'I Wouldn't Bother' is out now 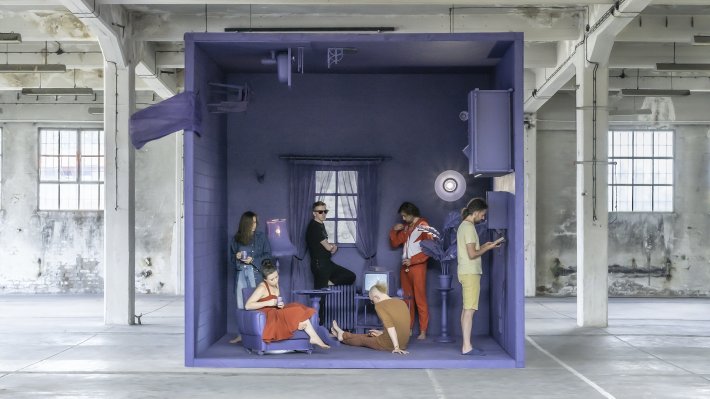 After spending the last few years churning out a bright and lofty array of vibrant offerings, Polish outfit Alfah Femmes have now returned to deliver their mesmerising new EP 'I Wouldn't Bother'.

Featuring the previous shared delight 'Dumb', 'I Wouldn't Bother' makes for wonderfully enriching listen. Channelling more of that smooth and shimmering indie-rock aesthetic they are known for, their newest collection is a warm and enticing return to form for the group.

So with the new EP out now, we sat down with their guitarist Marcin Galazka and bassist Przemyslaw Bartos to find out more about their origins and what has inspired them most over the years.

MG: A Soviet-made bass - BORISOV BASS-1, I think. By today's standards, a cosmic design and built-in effects, poor sounding too, probably (so, by my standards - amazing). Since I’ve always liked to explore, I made a whole lot of modifications to it and pulled out the frets to have a fretless. I got rid of it somewhere along the way, and now I regret it, but it was some hundred years ago. Later my dream was to own a Squier Stratocaster JV, an instrument very uncommon in my peripheral town at the time. Its price then, however, was far beyond reach for representatives of alternative art that were my parents. 300 bucks at a time when you had to pay 5,000 Polish zlotys for one dollar, and the monthly salary in Poland was about $20 - that’s a price as cosmic as the design of the aforementioned Soviet bass. Later I also had a guitar made of chipboard. When a friend from my hometown - frontman of a classic Polish rock band (Lady Pank) - saw it, he immediately called the guitarist to tell him about it.

PB: In my case it was an acoustic guitar (a relic of the previous political system) that belonged to my mother. It was lying forgotten behind the couch in the living room, and I took it out because I wanted to learn Nirvana's songs from the “MTV Unplugged in New York” show. The chords were shown to me by the rightful owner of the instrument. If I were to talk about an instrument that I owned myself, I would probably point to my first bass guitar (semi-acoustic Epiphone Jack Cassady Bass), beautiful and very distinctive, on which I basically learned how to play and which I regret selling to this day.

PB: When I was a child, for some reason I really enjoyed listening to the works of most famous classical music composers. I played Vivaldi, Bach, Mozart, Beethoven, Verdi, Strauss and Tchaikovsky from shitty CDs added to equally shit periodicals, which depicted important figures of classical music in an unfathomable and banal way. Later, when I first listened to The Beatles’ “Help!”, the cassette did not leave my player for many months. The fascination with music of the 1960s is extremely strong in me to this day. As for the less obvious stuff - I loved video game soundtracks, I even recorded individual melodies from games for Super Nintendo, PSX, Game Boy or PS2 with a cassette recorder. Today - fortunately for me - they are all at your fingertips, available on streaming services, or on YouTube.

MG: My father was once quite a popular folk performer in Poland, so what’s most stuck in my head are vinyl recordings from the 1960s, mainly Simon & Garfunkel.

MG: From an early age to some point in my adult life, I had a great quest - I bought all vinyl productions of Polish artists. Everything. I believe that this is how I paid off a metaphysical debt to my native scene. It is definitely a unique collection, among which there are even gems of the so-called agro-rock and student rock, which of course I despise, but then again you cannot argue with sentiments.

PB: I was given a Britney Spears LP "... Baby One More Time" for my birthday. Even today, if I was woken up in the middle of the night, I am able to karaoke the crap out of the first half of the album.

PB: I never think of someone else's work that way. But there are a lot of awesome songs that I think have it all. I could go on and on - lots of singles from old Motown, the Beatles, Beach Boys, Bowie, okay, I’ll stop because that doesn't make sense (LAUGH).

MG: “Heroes”. Few things genuinely touch me, and this song does.

PB: A few. The guitarist for the band (MG) hates the sound of the guitar, so we usually have the so-called "unguitaring" of the composition. Guitar is supposed to play and sound anti-guitar. Generally, we also like to leave some mistakes/shifts that later become either a very important or central element of the composition, and which afterwards are quite difficult to recreate live.

PB: I love listening to whatever Tim Lefebvre plays on the bass.

PB: Talking Heads. It could actually be a festival day, with Blondie, B-52s, Tuff Darts, and Leila and The Snakes also playing. It would be a whole lotta fun to play before Courtney Barnett.

MG: We have been Wilco fans for many years, and with each new album we find something in their music that is extremely interesting. Later it turns out that it sounds even better live. Everything works there, so if I were to point to one specific act, it would definitely be Wilco.

PB: Wonderful uncertainty, the necessity to work under pressure and thus looking for unconventional ways and solutions.

PB: Wonderful uncertainty, the necessity to work under pressure and thus looking for unconventional ways and solutions. Plus no time and no money.

MG: On stage to stand astride, not at attention - being a member of a rock band, not to look like a member of a wedding band. To find a point in the audience and look slightly above it - so not to be stuck during the whole show with downcast eyes staring at the pedalboard.

PB: “Why do you need practice? Can't you play"? - this one is overheard, haha, I got nothing but shit advice or scoldings.

Alfah Femmes' new EP 'I Wouldn't Bother' is available to stream now. Check it out in full via the player below.

11 hours 55 min ago With their eagerly-awaited new album landing in the coming months, Superorganism have now dropped

15 hours 11 sec ago With a bold and blistering array of gems under his belt already, including the breakthrough anthe