Getting To Know... baby meth

Getting To Know... baby meth

His new single 'Wildflower' is out now 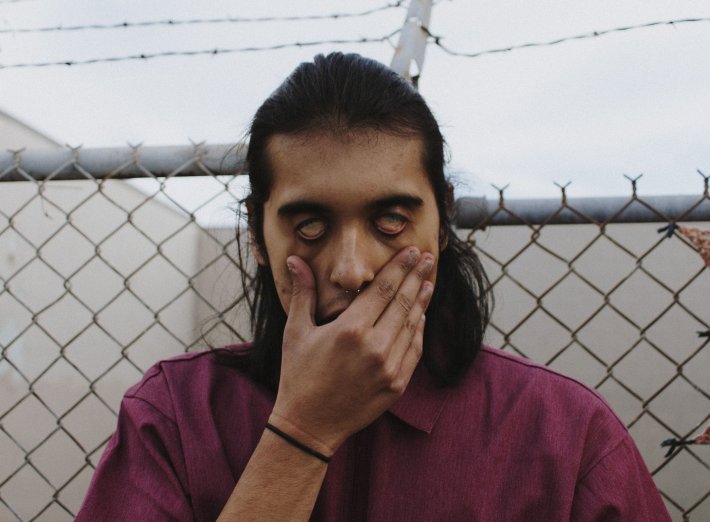 After establishing himself with a breadth of rich and enticing offerings these last few months, emerging rapper baby meth has now returned with his breezy new effort 'Wildflower'.

Channeling the same smooth and laid-back vibes as acts like Childish Gambino, 'Wildflower' makes for a wonderfully inviting listen. With his captivating flow riding a bed of light and airy dream-pop production, it already feels like we will be hearing a lot more from him in the months to come.

So with the new single available now, we sat down with him to find out more about his origins and what has inspired him most lately.

I never actually learned to play an instrument. My mom tried her hardest to get me into it though! Guitar and piano lessons were short lived though. I had trouble sticking to things growing up. When I was in middle school I tried joining the band and picking up the drums. The band teacher slipped up and told me that I had no rhythm. I instantly was embarrassed and quit and wrote off music for a while. It wasn’t until I discovered DAW’s that I started messing around with digital instruments again. As of right now though I’m trying to teach myself to play guitar. I currently have an electric guitar on loan from one of my homies, thank Colby!

I grew up around hip hop. My family ran a hip hop clothing store in Milwaukee so when I was young I was listening to things I probably shouldn’t have been. One of the main staples of my childhood was Reggaeton. Artists like Wisin y Yandel, Daddy Yankee and Don Omar were in my rotation. When I grew out of that I listened to a lot of Bone Thugs n Harmony, Mobb Deep, Wu Tang, Twista. I remember my dad had a burned copy of Kanye’s “College Dropout” in his car for almost a decade. I have many fond memories of getting picked up from baseball practice and heading home listening to Through the Wire. My dad's favourite song on that tape was “Last Call”, we’d listen to all 13 minutes of it.

When I was growing up, burning your own CD’s was very popular. My uncle would make me CD’s with censored versions of popular songs for me. One day however I was able to get ahold of some from his personal stash and the most notable one I played in my CD player was full of Crunk Music. Lil Jon and The Eastside Boyz, Three 6 Mafia things like that. I remember taking a road trip to Mexico and bumping ‘In My White Tee’ by Dem Franchize Boyz the whole way.

Honestly there isn’t anything I wish I wrote myself. Music is so unique to the person making it I’d never say “I wish I wrote that!” There are a bunch of songs that I can appreciate and think “Wow that was genius!” But at the end of the day, if I wish something existed I’ll make it myself.

I mostly make music at night. I always crack open a cold one and start recording. I don't really write things out anymore, I just punch in. I find it helps with my flow and creativity and keeps things exciting. That being said, recording at night does have its limitations! I live in an apartment and I have to be considerate when it comes to my neighbours. I’ve only gotten one complaint, my neighbour texted me asking if I could possibly sing quieter (it was 4 am). But shoutout to my neighbours for having to listen to me night after night.

I tend to find comfort in listening to the same artists over and over again. Lately I’ve been trying to refresh my listening catalogue. I’ve actually been asking my older coworkers to put me on to rock and punk from when they were younger. I also always ask my mom for older latin artist recommendations. Lately I’ve been listening to a lot of Jose Jose, Los Terricolas, and Pedro Infante.

Tough question because I’d be grateful to open up for Peppa Pig but I’d say my dream would be to open up for the $uicideboy$. I listen to their music religiously and they are my go to comfort music. Musically our styles are very different so I have no idea how that would work out but I love their energy and everything they do. I went to Grey Day 2019 and the energy in that venue was visceral. Everytime I go to live shows all I can think is “I can’t wait for that to be me”, and I know one day it will be.

I'd say the most rewarding part is making music that you wish existed. There's something to be said about having a feeling or idea and seeing it come to fruition. This in addition to the memories and experiences that are linked to each particular recording session are what gets me. I have an absolutely awful memory however I can play any song I’ve made and tell you where I was, how I was feeling and the funny things that happened during that session.

The most frustrating part is when people don’t appreciate it or write it off as “garbage”. Music is something that I pour my heart and soul into and it's my main form of expression and catharsis. There is nothing worse than creating something that you are extremely proud of and showing it to someone who doesn’t appreciate it. It’s truly a devastating feeling but it’s something that I’ve been learning to deal with. It’s definitely something to be expected when someone puts out their raw emotions and thoughts in such a public form, however people need to remember that musicians are people too! Words hurt man. But at the end of the day you won't get far in music, and in life, if you care what people think.

People are going to judge, let them. I’ve been writing and recording for the past three years but didn’t actually start releasing stuff until September of last year. I would make music and just play it in my car alone because I was scared of what people would say. I had to learn that it seriously doesn’t matter what some people think or say about your craft. There are 7 billion people in the world and your target audience is among them. Those feelings that you have aren’t unique and there will be people that resonate with what you have to say. You just have to find them.

baby meth's new single 'Wildflower' is available to stream now. Check it out in the player below.

11 hours 8 min ago With her eagerly-awaited new remix EP landing next month, Bess Atwell has now shared the next cut

14 hours 3 min ago After an astonishing run of form throughout his releases over the last decade, South African sing