His debut single 'Heat And Disorder' is out now 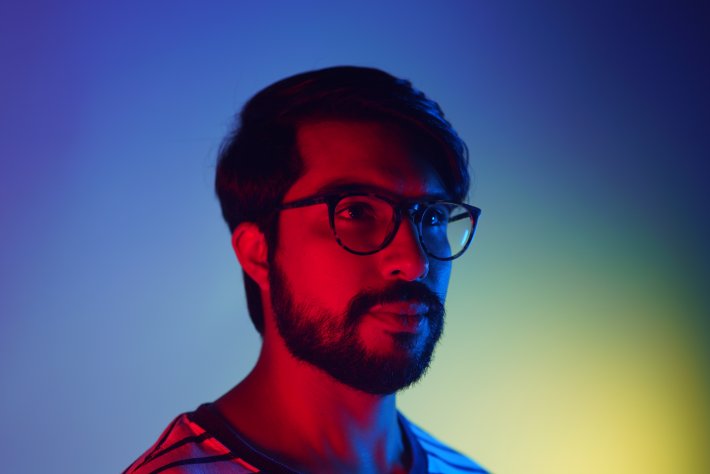 Channelling diverse and sprawling influences such as LCD Soundsystem and Tame Impala, 'Heat And Disorder' makes for a wonderfully vivid initial introduction. With its warm and breezy aesthetic, sweeping production, and his own atmospheric voice at the helm, this new offering shows an incredible amount of promise for this emerging artist.

The piano. It was my first instrument, but I wouldn’t say I fell in love with it straight away. Growing up in Iran, I started classical training when I was seven, and for many years, it was more of a chore, to be honest. I wasn’t patient enough to improve my sight-reading, so it was pretty frustrating and unrewarding. But I was always interested in coming up with melodies. I used to put films on silent on our TV set and try to come up with my own soundtrack.

It was only once we moved to the States and I started college that my attitude towards the piano, and music in general shifted. I was taking some music theory courses, and I’d always end up in the practice rooms next door after class. There was an upright piano in each room. I think that’s really where I fell in love with the piano. I was able to take what I was learning in class and just experiment, without worrying about anything else. There was a kind of freedom in those practice rooms.

My parents owned a lot of classical music on cassette, and for a while, that’s the only music I was exposed to. There was a lot of Russian and Soviet era music — Tchaikovsky and Aram Khachaturian, for example. It was all magical to me, the lushness of the music bursting through the sound system. We also had a sizable collection of Iranian rock and pop music from the early-70’s, from before the Iranian revolution. Artists like Farhad, and Googoosh were major household favorites.

When we moved to the States, in High School, I got into 60’s-era rock n’ roll. It became something of an obsession. I’d spend countless hours online lost in Beatles mythology, or looking into the backstory of Dylan’s Highway 61. I was not a good student, I was distracted and disinterested in most of my classes, but I knew a hell of a lot about early psychedelia and classic rock history.

The first CDs I remember saving up for and buying with my own money were Kid Cudi’s Man on the Moon: The End of Day, and MGMT’s Oracular Spectacular. I’m not sure which one I bought first; I might’ve bought both at the same time.

The first record I bought on vinyl was most likely a jazz record I’d picked out of a bin in a used record shop for $3 — probably a Coltrane, or Gershwin record.

This one is easy — ‘Weird Fishes’ by Radiohead. It’s such an organic, and effortlessly dynamic composition. It’s built around arpeggiating tetrads in D Major that build up to an epic crescendo. Then, two-thirds of the way in, the song suddenly modulates up a 4th to G Major. There’s no verse, there’s no chorus. It’s just poetry masquerading in song form.

It really depends, and I don’t think there’s one systematic ritual that always works for me. More often though, the starting point is simply discovering new music, trying to take it apart, and emulate it in some way. I try not to get too hung up on words and lyrics early on. I’ve learned to focus more on melody, and let the words come as they may.

I’ve been listening to Japanese Breakfast’s new album, Jubilee, a lot. Sonically, it’s very much of this moment— it’s indie pop on an epic scale. But like everything else Zauner does, it’s so brutally honest and bare.

I’ve also been listening to Billie Eilish, non-stop, for a while now. I don’t think we’re able to really grasp and appreciate what she’s doing and the impact she’s having on pop music. As far as I’m concerned, Billie and FINNEAS are making some of the most exciting pop music I’ve heard in a very long time.

I can’t help but mention Phoebe Bridgers’ Punisher, as well — another instant classic that I haven’t been able to stop listening to.

The most surreal experience I can imagine would be to walk on the same stage as Radiohead, and open a show for them. It’s probably not the safest choice because it’d be nearly impossible to measure up to their performance. But it’d be an absolute dream come true.

There is usually a moment when all the pieces of a song finally start coming into focus and falling into place. It’s an intensely euphoric and rewarding experience. But there’s also a deeply satisfying experience to see another person connect with your music, and understand it on their own terms. When ‘Heat and Disorder’ came out, for the first time, I had complete strangers who’d heard it on a playlist, reach out to me on social media to say how much they liked the song. It’s strange because you start to realize that this piece of music doesn’t really belong to you anymore. It’s liberating, in a way.

For me, the most frustrating part has to be this unrelenting pressure to keep creating engaging content on social media. But it is the way independent artists are now able to gain traction and visibility, and it’s allowed a lot of artists to carve their own path in ways that would’ve been impossible 10-15 years ago.

I personally find it absolutely draining to keep pumping out content consistently, and still manage to make time to work on upcoming releases.

As a musician and a songwriter, the best advice I’ve gotten is to not let theory get in the way of a song. When I write, I’m rarely, if ever, thinking directly in terms of music theory and harmonic progression.

Understanding theory can help you realize your ideas, and to communicate them to other musicians, but it usually doesn’t give birth to those ideas in the first place. Theory isn’t the underlying reason why something works, it’s just an imperfect model that we use to explain what our brains have become accustomed to hearing.

BADSOMA's debut single 'Heat And Disorder' is available to stream now. Check it out in the player below.

17 hours 18 min ago After spending the last few months churning out a broad and shimmering array of delights, Rotterd