Getting To Know... Benjamin Haycock

Getting To Know... Benjamin Haycock

His new single 'Force For Nature' is out now 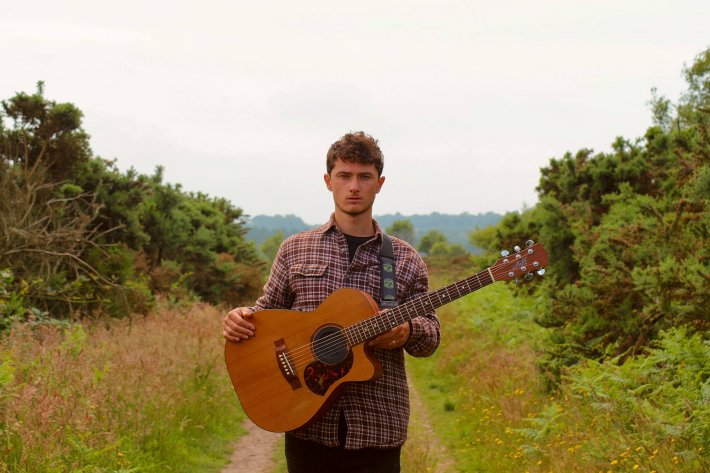 Despite first emerging some years ago with a rich and diverse selection of offerings, fast-rising singer and songwriter Benjamin Haycock recently found a new dose of confidence after a successful spate on The Voice UK earlier this year, and has now returned with his latest effort 'Force For Nature'.

Channelling a broad and dynamic aesthetic from start to finish, 'Force For Nature' sees him return with renewed spirits. With its bright and uplifting atmospheric, driven direction, and even a fast-paced lyrical flow in the middle, his newest release looks set to see his profile grow even further in the months to come.

The first instruments that I ever learnt were the drums and weirdly, the Glockenspiel. However, the first that I truly fell in love with was my first ever acoustic guitar. I brought it for £40 from a local guitar shop selling second-hand instruments when I was 14 years old. Honestly, I played this instrument some nights until my fingers bled, getting completely lost in the moment, strumming the same four minor chords with every fibre in my body. Incredibly a decade later, the guitar still has the same 6 strings left on it. If that’s not longevity, then I don’t know what is!

Where I grew up in inner city Birmingham, there was a lot of rap and grime being played in school. So I naturally explored that world in my teens, becoming a rapper myself and finding my taste within the work of artists such as Akala, Mic Righteous and Lowkey. Away from school, I loved indie folk and acoustic music from the likes of Daughter and Bon Iver. My parents always had Motown and old Soul playing in the car growing up too, so I couldn’t help but love artists like Otis Redding and Sam Cooke.

This one’s quite obscure as although I remember buying my first few albums, the one I remember being accidentally introduced to and therefore owning, was strangely ‘A Grand Don’t Come for Free’ by The Streets. One afternoon after school in my early secondary school years, I picked up a second hand PSP from the local game shop, and the guy who previously owned it must have forgotten to wipe his memory card. I scrolled through his music and there were two albums left on it. One by The Streets and another by 50 cent. Suffice to say, I took to Mike Skinner’s familiar tone more. He’s from my neck of the woods after all!

If there’s one classic that springs to mind, it’s probably Bohemian Rhapsody. It’s so incredibly dynamic and musically interesting, yet captivates generations all the same, despite constantly shifting music taste. Another would be ‘Dance with my Father’. Although I’ve already got a song called ‘Restlessness’ which is about my late father, it took quite a few years to be able to really articulate how I felt. Back then, that Luther Vandross song communicated everything that I wanted to say, and more.

It all depends on the type of song that I’m writing and more importantly, what I’m writing about. I tend to always develop a guitar part or melody first whilst getting ‘in the zone’ whilst playing my guitar, and lyrics often come within that moment. Nevertheless, growing up I used to love walking through crowded city streets listening to instrumentals and jotting down lyrics as I got inspired. Now, especially having moved to Devon, going somewhere alone in nature is a must for a lot of my recent songwriting.

One artist who I’ve loved listening to throughout lockdown is David Keenan. He’s an incredibly poetic Irish singer-songwriter, who’s lyricism is simply wonderful. While I often get inspired by music and great vocalists, the quality of David’s work never fails to make me want to pick up a pen and pad. Another artist I’ve been really into recently is Canadian singer-songwriter Leif Vollebekk. Again, brilliant lyrics, timeless tone and gorgeous music.

This one’s difficult as there’s so many artists I’d love to open for! Being put on the spot, I’d have to say Radiohead. Someone who would also be amazing would be John Butler. I’ve recently partnered with Maton Guitars as one of their artists. John is also a Maton artist and has long influenced my music, it would be unbelievable to open up for him and maybe even play together on a track or two!

This would have to be having that really authentic reciprocal connection with an audience while performing. A lot of my songs are extremely personal, so having people engrossed within those moments where I’m giving everything on stage, is a special feeling!

For me. I think the most frustrating part about being a modern day musician is social media. It has its benefits, especially for independent artists and it’s an incredibly useful tool to connect with fans and help build momentum for projects that I’m working on and creating a brand identity. However, if I could simply write, record, create videos and perform, I’d be more than content. For better or for worse, nowadays you have to be consistent on social media. Sometimes the pressures of continuing momentum can sometimes nullify your creativity as a musician. It’s about finding a balance. I think I’m starting to do that now and I’m even enjoying it at times, but it’s definitely a work in progress.

It would have to be some quite simple, yet important advice, ‘just express yourself’. Music is subjective. As a musician, you’re not going to be everyone’s cup of tea. So, why try? As a songwriter, music for me is a catharsis, a passion and often deeply personal. If people can relate to that, whether on stage or on a record, that’s an incredible feeling! But in my experience, the audience relates the most when you’re being your authentic self and giving everything that you have within the moment.

Benjamin Haycock's new single 'Force For Nature' is available to stream now. Check it out in the player below.

7 hours 15 min ago With his highly-anticipated new album dropping early next year, Miles Kane has now unveiled the n

7 hours 8 min ago Just when you think the indie-rock scene has reached peak saturation, an artist comes along and f