Getting To Know... Big Wednesday

Getting To Know... Big Wednesday

The band's new single 'Do Me No Good' is out now 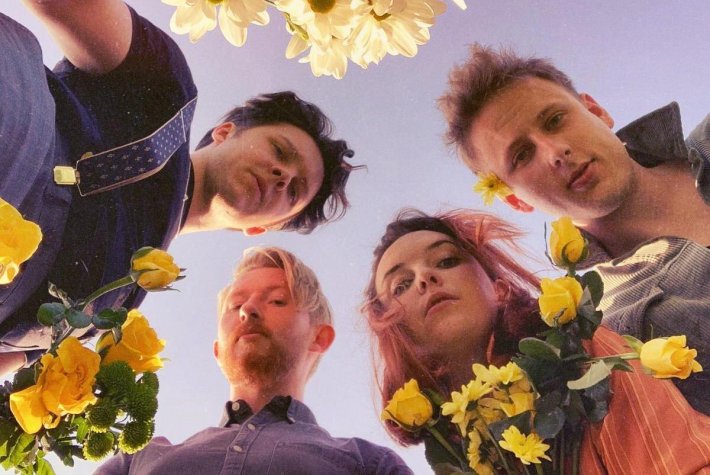 Having spent the last year building their name as a bright and uplifting indie-rock outfit, London-based quartet Big Wednesday now return with their latest glistening offering 'Do Me No Good'.

Lifted from their most recent EP, 'Do Me No Good' looks to channel the bold and euphoric energy of acts like Radiohead and Elbow with its soaring tones. Mixing big and cacophonous guitar riffs with smooth and sweeping melodies, this new delight sees them deliver one of their most captivating releases so far.

So with things looking very promising for the group, we sat them down to find out more about their origins and what has inspired them most over the years.

Harvey: I flirted with guitar and piano for a lot of my childhood without falling in love with the playing of either - I just wanted to sing songs! I ended up teaching myself guitar on my friend’s guitars so I could write and then over time fell into a deep fascination with it.

Caitlin: Drums. My mother was a teacher and I saw one of her colleagues playing the drum kit in a Christmas concert. I instantly wanted to have a go and was hooked from then on.

Jacob: The guitar. My dad was a massive Elvis Presley fan and I thought he was really cool. I wanted to be just like him.

Ryan: I really did love guitar and started learning when I was about 10 years old, but I then basically got bullied into playing bass by my older brother (he had a high school band that needed a bass player). I played my first gig emulating the bass line from a ZZtop tune on a Stratocaster.

Each member brings something a bit different to the mix, so there is a real melting pot of inspirations for us as individual musicians ranging from The Beatles, Little Richard, RHCP, Bowie, Biffy and more. Collectively this is reflected in our Indie Rock vibe with pop and soul undertones, nodding towards retro bands like The Zombies and Fleetwood Mac.

Harvey: In my teens I discovered the world of post punk as well as the great 90s British bands. ‘Blur’ were pretty much the soundtrack to a big chunk of my teenage life.

Caitlin: I loved listening to a range of artists growing up. Santana, Fleetwood Mac and Pink were among my favourites. I also remember obsessing over Florence and the Machine as well as Biffy Clyro, Dolly Parton, the Stereophonics, Queen and The Police. Rhythm and strong female vocals/harmonies were something I really got excited by!

Jacob: In my teenage years I really got into punk music. English bands like The Clash as well as modern American rock bands like the Foo Fighters and Queens of the Stone Age. Pretty much anything with loud guitars and big drums.

Ryan: I was a massive Bon Jovi and RHCP fan growing up. Mid- teens I had guys like Stonesour & SOAD on repeat, and one of my favourite albums was the Rage Against the Machine covers album “Renegades”.

Harvey: I remember being obsessed with Stevie Wonder as a kid and would belt out his songs, especially ‘Living For The City’. Soul music just felt so good to sing that I thought “If I could just do this, I’d be very very happy...”

Caitlin: Gosh, that’s such a difficult question!! I’d have to say that My Chemical Romance ‘Welcome to the Black Parade’ really sticks out to me as a song that completely overwhelmed me when I first listened to it. I remember watching the video too and being so excited by the whole concept of the visual storytelling. It was so dramatic and made me want more from music.

Jacob: There are two songs I remember listening to all the time, the first being Tom Jones’ ‘Mama told me not Come’ and the second, ‘Paint it Black’ by The Rolling Stones. I found them both to be very powerful songs full of character and bold musical choices.

Ryan: I reckon it was probably By The Way by RHCP.

Harvey: I go through phases but recently I’m loving ‘It Doesn’t Have To Be This Way’ by the Blow Monkeys. The scale and punch of that 80s production does wonders to get you up and about in the morning.

Caitlin: I tend to just pop Spotify on and blast out Shuffle Play on ‘liked songs’ so really anything could happen! I love listening to Haim, Maggie Rogers and always a bit of Tom Jones of course!

Jacob: I like to blast either something by Queens of the Stone Age or Kendrick Lamar because both are super heavy and loud and that gets me going ready for the day.

Ryan: Right now, pretty much any track by Gunship and their soothing synthwave 80’s nostalgic magic.

All our songs have some element of our own lives at their core, and our relationships are what make us human, functioning as the lense through which we experience the world around us. The majority of our songs are based on mutual experiences and feelings we’ve shared. Of course, there are certain songs that we know are written about people in our lives whether it be personally or mutual friends we all have. We’d name and shame, but that’d be giving the magic away!

As we all met at drama school there have been so many incredible experiences and gigs we have been lucky enough to play. Every year we have played the college summer ball which is called ‘Brufest’. It has always been set up much like a mini Glastonbury Festival, and to have the entire college packed into the field dancing and singing to our songs was always so exciting for us! We also travelled to Brighton for the first time as a band to play a charity gig there and spent the weekend on the beach, writing and soaking up the sun. It felt like a mini tour and gave us a taste of how fun it would be to spend time together, travelling to different places around the UK and gigging!

We have all studied together to become professional Actors, so that’s collectively our main passion aside from being musicians.

Harvey: Cinema and film is a world I can easily lose myself in. Watching classics, ‘making-of’ videos and reading about the film world is one of my favourite things to do.

Caitlin: Traveling, drinking tea, looking after plants (9/10 times failing) and Zumba (with or without the alcoholic beverage depending on my mood).

Harvey: I’d be painting and drawing. As a little kid I always wanted to illustrate books.

Jacob: I would love to have an animal farm (but not eat them).

Ryan: I’d either be Undertaking at a funeral directors or PT-ing/fitness instructing in a gym.

Big Wednesday's new single 'Do Me No Good' is available to stream and download now. Have a listen to it in the player below.

Big Wednesday · Do Me No Good

1 day 2 hours ago Having dazzled so many with a string of impressive releases these last few months, which have see