Getting To Know.. Birdman Cult

Getting To Know.. Birdman Cult 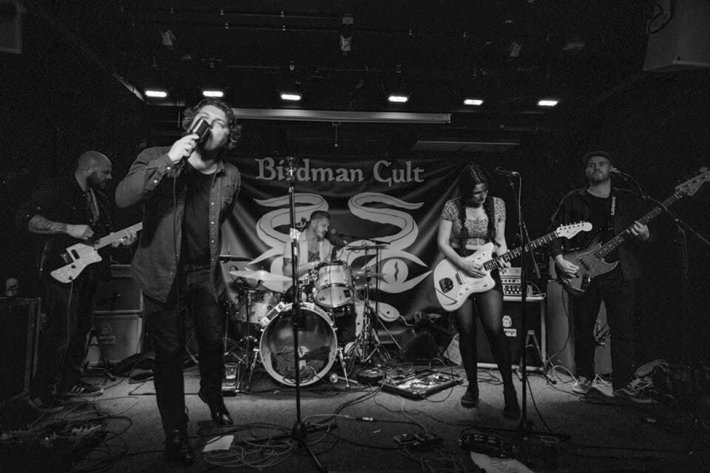 Following on from a string of rich and enticing offerings these last few years, Bristol-based outfit Birdman Cult have now returned with their latest anthemic belter 'Roll Em Up & Tuck It In'.

Channelling the dark and pulsing aesthetic of acts like Black Rebel Motorcycle Club, 'Roll Em Up & Tuck It In' makes for an incredibly dense return for them. Jam-packed with powerful hooks, killer production, and truly euphoric moments, this one will have you tapping your toes from start to finish.

So with the new single available now, we sat down with Joe from the band to find out more about his background and what has inspired him most over the years.

Guitar, I had an odd music teacher when I was 8 and he would teach us songs by The Moody Blues. But I don’t play that or any other instrument since a kid, if I could it would be guitar or piano, instead I play this busted old thorax. I always wanted to be a singer on stage. It goes hand in hand with my middle child complex and need for constant approval and showing off.

All sorts really, I was brought up on Bob Dylan and the Band, I always loved The Kinks, as I got older and developed my own tastes I was big into Hiphop and would go to nights in Newcastle and get into the scene there. I still love Rap and stuff from when I was younger, I don’t believe in guilty pleasures, there’s just shit that knocks and shit that don’t.

One of the first albums I bought myself was Urban Hymns by Verve, still a classic UK 90s album!

‘Merry Christmas Everybody’ by Slade, id be sitting pretty with the goldmine from that piece of dog egg. But in all seriousness maybe ‘Harvest Moon’ by Neil Young, that’s a beautiful track.

We usually slaughter a small Scenester at the Birdman Alter for good luck. Me and Sam (Guitarist) like to get really heated talking about things we hate amd makes us bitter, and then try and make a sleazy vibe to fit it, with our next single it all started from my fridge being on the fritz and I broke my toes kicking it to death. That was an intense day in the studio.

Right now im into Alex Maas, the singer for Black Angels, his solo stuff is great, i know there’s a lot of good stuff out there I just don’t check it a lot really, there’s still bands from the 70s i'm discovering for the first time. I think ‘Fat White Family’ and ‘Viagra Boys’ are the newest bands ive been excited about and bought the albums of, particularly the Fat Whites, they’re fearless and there’s not enough of that in mainstream music right now.

Queens of the stone age for sure, they’ve been consistently great through the years and are amazing live. Plus I think they’re crowd would be into Birdman Cult so not strictly without selfish gain!

I've been making music since I was 14, and I still find listening back to that creation for the first time in headphones the most exhilarating part, I love playing live of course, gigs are spontaneous, edgy at times and you never know what’s comin your way, whereas the purity of ‘making’ a track is just equal parts science and magic.

No surprise here but getting it out there for sure, reach is important but we try not to fixate on radio or playlists too much, we do what we can and we know its important but ive seen the shifting sands over the years and its not why we make music to fixate on the ‘industry’ though listening ears are a definite bonus! We want to remain as organic as possible… That said if the digital overlords want to add us to the algorithms, that would go a long way to get new acolytes in the Cult.

Don’t go to an all you can eat buffet before you play.

All advice is bollox in my opinion. Look, the people giving me advice over the years have done fuck all so here’s my advice FOR WHAT ITS WORTH… Don’t do what anyone else is doin’, don’t try to fit in, you get in where you fit in, if and when it happens, and no ones passin’ out medals to conforming trend followers, its fly by night and things change every few years. I can’t sing for toffee, but I make mint tunes, so don’t let lack of natural talent stop you either, force that shit! Force it down the neck of every nay-sayer you come across, if they don’t like it fuck ‘em, the worlds fucked, and we’re all doomed anyway, so do what turns you on.

Birdman Cult's new single 'Roll Em Up & Tuck It In' is available to stream now. Check it out in the player below.

Birdman Cult · ROLL EM UP & TUCK IT IN

12 hours 32 min ago With her eagerly-awaited new album arriving in the coming months, Martha Wainwright has now dropp

7 hours 51 min ago With the likes of BBC Introducing and Radio 1xtra praising her work over the last few months, Man