Getting To Know... Blonds

Getting To Know... Blonds

His new EP 'Spare Time' is out now 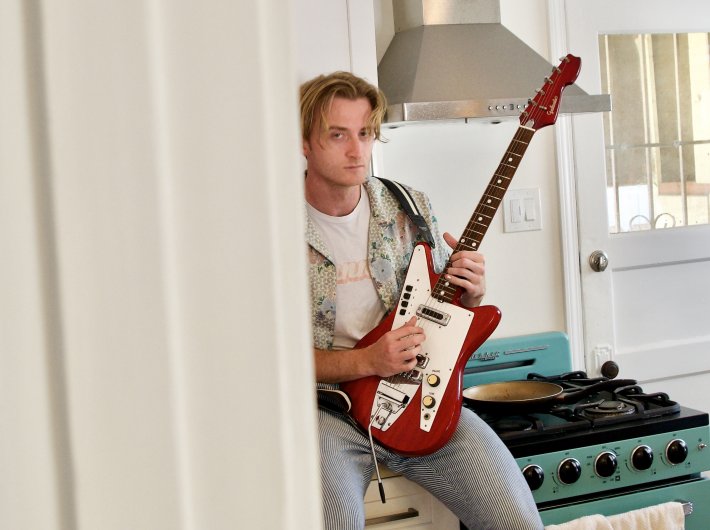 After finding an enormous amount of support for his releases these last few months, California-based singer and songwriter Luciano Thomas aka Blonds recently returned to deliver his stunning new EP 'Spare Time'.

Channelling a bold and dynamic sound from start to finish, 'Spare Time' makes for a wonderfully fresh and energetic listen. Filled with bright and uplifting aesthetic, catchy hooks, and his own glittering personality layered throughout, this guy is certainly onto something special with this one.

So with the new EP out now, we sat down with him to find out more about his background and what has inspired him most over the years.

Guitar. My parents had signed me up for cello lessons when I was around six years old and I hated it. I discovered guitar when I was eight and loved it, then proceeded to fall in love with every other instrument as well.

My mom raised me on punk rock and encouraged me to seek out music that I liked, which resulted in me listening to groups like Nirvana, Suicidal Tendencies, Green Day, Social Distortion, Blink-182, and Linkin Park when I was a small child. I proudly still listen to a lot of that music today, although my tastes have expanded wildly.

The first album I bought with "my own money" (parents' allowance) was Meteora by Linkin Park when I was six years old. I loved the heaviness and intensity of it at the time.

There are many, many songs I wish I had written myself, to be honest, but if I had to choose one that reflects my tastes lately it would be "astrid" by Glaive. The layered guitar melodies are exactly the type of thing I try to write in songs of mine like "Something Nice" or "I Try" plus the lyrics are perfectly juvenile pop, and I mean that in the best way.

Writing good music tends to play out like receiving a gift from another dimension, but that said, while I'm in the middle of working on a project and I'm not sure what direction I should take it in, my ritual is to drive by the beach at night while listening to the music I'm working on. It's hard to describe verbally, but many of my most honest and emotional memories take place at the beach at night, so the setting helps me to recognize where the honesty in my music is.

My favorite artists lately are Glaive and Raveena. The attitude in Glaive's music takes me back to when I first started figuring out how to write music seriously in high school, and Raveena's music is so beautiful in a way that combines modern R&B with the type of relaxing mood you might expect from an artist like Norah Jones.

If I could open for anyone, it would probably be Blink-182. Their music has always meant the world to me so I would absolutely love the opportunity to meet them. Also, the music I've been working on lately is heavily inspired by them so I think it would be a good mix.

The most rewarding part of being a musician is giving people an emotional experience through a song. It's baffling to me that someone could listen to something that I've made and it triggers some sort of reaction within them, but that's what I'm striving to achieve.

The most frustrating part of being a musician, besides the fact that it's so rare to be able to make music exclusively for a living, is figuring out the most optimal version of a song. At the best moments, a song writes itself, but even then there are infinite possibilities when it comes to mixing/mastering the song, and it can be very frustrating trying to figure out what sounds the absolute best.

The best advice I received as a musician probably came from my ex-girlfriend who once asked me some version of "why would you release a boring song?" It may sound harsh, but in the context of the moment, it wasn't, and was actually the perfect question to ask because it made me realise how important it is to be engaging with your music.

Blonds' new EP 'Spare Time' is available to stream now. Check out the new single 'Something Nice' in the player below.

5 hours 10 min ago Following up the enormous success behind their 2017 LP 'Relaxer', alt-J have now returned to anno

1 day 2 hours ago After delighting us with a captivating array of offerings this past year, which have seen nods fr