Getting To Know... Carina Torres

Getting To Know... Carina Torres

Her new single 'Count On Me' is out now 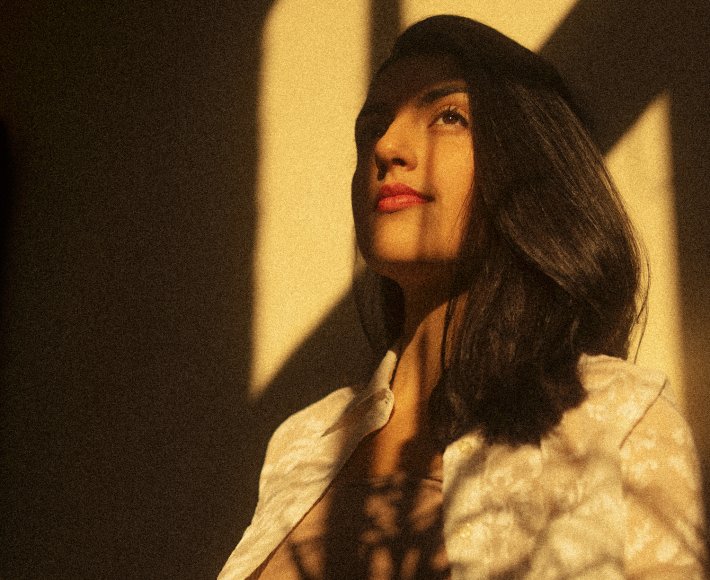 After cementing herself with a flurry of bright and glossy releases throughout the year, Brazil-born but London-based singer and songwriter Carina Torres is now back once again to unveil her latest shimmering effort 'Count On Me'.

Channelling a wonderfully warm and soaring pop aesthetic from start to finish, 'Count On Me' looks to showcase more of the artist's bold and uplifting intentions. Filled with glittering textures, a sweeping atmosphere, and her own honey-soaked voice at the helm, she is certainly venturing into an exciting sound with this one.

Definitely the piano. My mom is an incredible pianist and I grew up listening and watching her play and practise all the time and was always mesmerised. She taught me a couple silly songs that I still remember how to play now. When I was around 16 I started studying music theory and started teaching myself how to play songs on piano that I wanted to sing. I also got a ukulele for Christmas at that age and was able to pick that up quite quickly, as would any 16 year old I think. My goal for next year is to learn how to play the guitar, so wish me luck with that!

I could list so many artists. We had a few CDs that we would listen to in the car on the way to school and on trips, etc. And I probably still know all of the songs by heart. We had Adele, Beyoncé, Lady Gaga, Rihanna, Avril Lavigne and a few Brazilian artists as well like Maria Gadú, Lenine and Zeca Baleiro. As a teenager I also really loved Bruno Mars, Hozier, Demi Lovato, Ed Sheeran, and so many more.

I actually have no idea, my family always had so many albums around the house. And by the time I would’ve bought one for myself with my own money, I wouldn’t really buy new CDs at that point because everything was already on streaming services.

Anything by Adele really, she is such an inspiration to me as a songwriter and as a singer. The album ‘21’ especially holds a place in my heart and I can sing along to the whole thing, I’d struggle to pick a favourite song.

Not really, I always film and record absolutely everything because it is easy to forget what you’ve just done when you are writing. I end up with a thousand videos and voice notes on my phone, but it’s worth it. I almost always write on my piano, so I usually start by playing around with chord progressions, or if I’ve started with the words and melody I try to figure out what chord progressions would work with what I’ve just come up with, but I find that more difficult.

I have been loving artists like Joy Crookes, Jorja Smith and Olivia Dean. I love their voices and writing styles. I have also kept my eye on Lola Young since I saw her perform live in Camden Assembly not long ago. She is an incredible singer and I am obsessed with everything she releases. Also, the fact that Adele is back and just released the ‘30’ album makes me incredibly happy and I have not stopped listening to the album since it came out. Another artist that I’ve recently discovered is Nina Cobham. She is the master of Spanglish songwriting, I absolutely love the way she writes. And I can’t not mention Doja Cat’s ‘Planet Her’ album and Ariana Grande’s ‘Positions’. They are two of my go to's since they each respectively came out.

To open for any of the artists that I’ve mentioned would be an absolute dream and an honour. So I’ll keep checking my emails in case an opportunity like that ever comes about... Again, wish me luck!

Performing live is my favourite part, for sure. I’ve had a couple people come up to me after a set and point out their favourite song, or say that they really enjoyed it, and that makes me the happiest. Also getting to release a song that you have been working on for ages and seeing people sing along to it or hum the melodies is absolutely crazy.

It’s hard not to care about numbers, especially in the beginning when they are small. But I am getting much better at not focusing on that and just let the music speak for itself and with time and hard-work I know I will get there. It just takes patience and a lot of passion.

To stop comparing myself and where I am in my life and career with others. Once you start trying to catch yourself when having those thoughts of “I am not good enough” or “So and so is doing better than me, I must be doing something wrong” and trying to break those patterns, you free yourself from constantly bringing yourself down and you become able to celebrate your own achievements, at your own pace. You become able to feel grateful for where you currently are.

Carina Torres' new single 'Count On Me' is available to stream now. Check out the new video for it in the player below.

1 hour 28 min ago Following on from the release of their highly-praised mixtape 'Rōnin I' in March last year, UNKLE