Getting To Know... Catherine Elms

Getting To Know... Catherine Elms

Her new single 'Fire Song' is out now 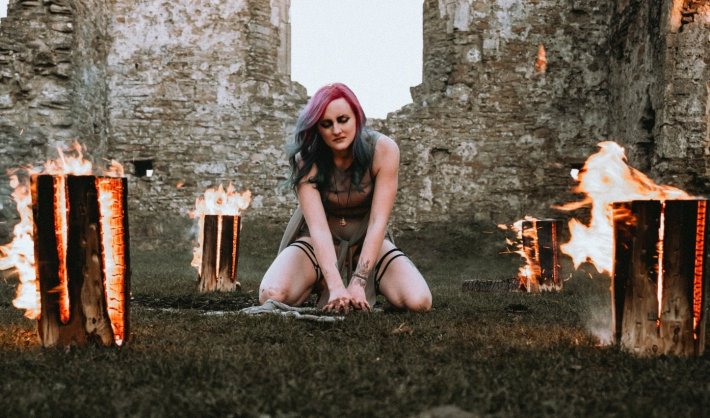 Following on from the release of her breakthrough debut single 'Frustrations' earlier this year, emerging singer and songwriter Catherine Elms has now delivered her powerful new effort 'Fire Song'.

Channelling more of that bold and soaring energy she has cultivated for herself, 'Fire Song' makes for a rich and euphoric return. Opting for a smooth and folk-inspired direction from start to finish, she shimmers and soars throughout this atmospheric and compelling new release.

I’ve always loved pianos and keys since I was a child, when I used to write songs about haunted houses and skipping school on my Dad’s Casio keyboard. Growing up, we could never afford formal music lessons, so I taught myself how to play the piano as a teenager – I was inspired after hearing The Dresden Dolls for the first time, and realising that I didn’t need to be classically trained to create powerful, beautiful music.

I was a weird goth kid, and as a young teen I was into bands like Evanescence, Red Hot Chili Peppers, and Green Day. My dad was also into new-wave and 80s goth so I used to listen to his compilation tapes with bands like Siouxsie and the Banshees, Depeche Mode, and The Cure. As a teenager, I got into more female-fronted rock like Hole, Jack Off Jill and Alanis Morissette, and a few years later became a huge Kate Bush stan. My tastes have always been eclectic, but everything I listened to tended to be female-fronted, highly emotional, and a bit dramatic/weird. I think all those themes carried over into my writing style too.

The first Spice Girls album – I loved their pop-feminism, their brash confidence, and I loved that they co-wrote their own songs, that felt very important to me at the time (plus, that album is full of bangers).

It’s so difficult to pick - I actually have a whole playlist of songs I wish I’d written! Basically anything by Kate Bush – I think she’s an incredible storyteller who wrings emotions from you as you listen. ‘Cloudbusting’ is one of my favourites.

Making time to create by scheduling it in, and honouring that time, is the absolute best way for me to get into writing new music – repetition and routine works well for my creativity. I also try to prioritise rest, self-care, and quiet time – you can’t pour from an empty cup, and having some inner peace helps my creativity flow.

I’ve been working with dark progressive band Birdeatsbaby to record my singles this year, and I’ve been listening to their music on repeat lately – I feel very lucky to be working with such a talented group of people. I’ve also been slightly obsessed with Georgia Train’s new indie noir album ‘Needles and Pinches’, especially the title track.

Opening for Kate Bush would be the dream!

Creating something that moves people and touches them, and connecting with others on that emotional level through my art. I often get people coming up to me after my gigs to say that I’ve put something into words that they have been feeling and struggling with – that emotional connection with another human means the world to me.

It’s very difficult to earn a living from music – Spotify’s miniscule artist payouts have a lot to answer for, but I think the problem is wider than Spotify – we live in an age where art is ephemeral and disposable, short-form content is the only way to get seen, people stream instead of purchasing music, and exposure is determined by algorithms. There’s also an expectation to constantly release content on at least a monthly basis – which is difficult and prohibitively expensive for those of us who hire musicians and acoustic instruments in recording studios. I’m not sure what the solution is to those problems - I’m still figuring that out, and particularly in the context of being a new artist starting out. Patreon and Bandcamp are great options if you have a supportive fanbase, and I think those platforms empower artists to carve out their own path.

The author Elizabeth Gilbert has a lot of great advice on staying creative and remaining true to yourself during times of self-doubt or despair. She writes about the importance of creating for its own sake, for the way it lights up your soul, and to let go of the desire for external praise, validation, or external measures of success. If people don’t like your art, too bad – keep going anyway, knowing that you’re doing what you were born to do. That’s a very empowering and freeing idea, and allows me to focus on the joy of creating music, no matter what happens once I’ve released it. You always hope that people will connect with your art, but as long as you’re proud of it, then that’s all that really matters.

Catherine Elms' new single 'Fire Song' is available to stream now. Check it out in the player below.