Getting To Know... Dad Hat

Getting To Know... Dad Hat

Their new single 'Tahoe' is out now 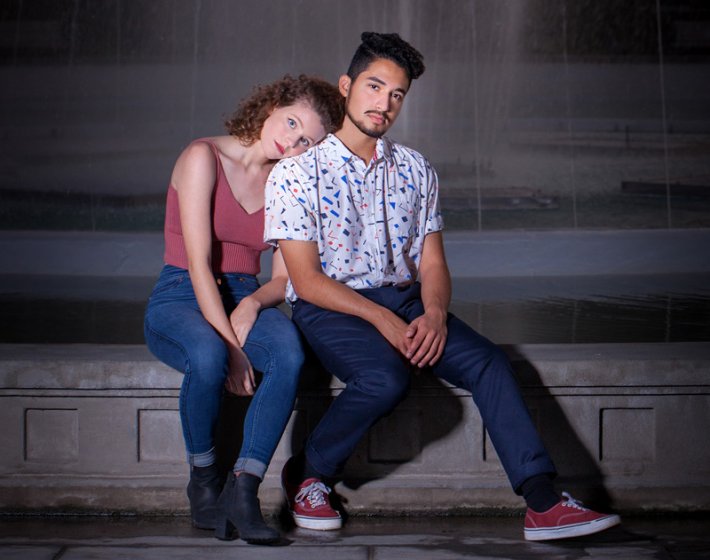 Following on from a string of enticing releases over the last year, LA-based duo Dad Hat recently returned to deliver their first single of 2021, the vibrant new offering 'Tahoe'.

Lifted from their forthcoming new EP, which is set to arrive later this year, 'Tahoe' sees the pair return in stellar form. With its smooth and seductive texture, breezy production, and ambient direction throughout, we can't wait to hear what they come out with again in the near future.

So with the new single doing the rounds, we sat down with them to find out more about their background and what has inspired them most throughout the last few years.

Steven: Guitar was the first instrument I fell in love with, though I didn’t always love it. In fact, for the first year or so of me owning a guitar I didn’t practice that much. It wasn’t until I started playing tunes that I liked, back then almost exclusively Beatles’ tunes, that my love for guitar really took off.

Maddie: Cello was the first instrument that I truly fell in love with, though I never learned to play it. Piano has always been my go-to instrument, and I’ve been playing that since I was very little, maybe three. Maybe one day I’ll learn to play Cello!

Steven: In my early teens, I was still pretty much obsessed with The Beatles – I was and still am a huge Beatles nerd. In my late teens, you could probably catch me listening to Jaco Pastorius or Pat Metheny, or actually most likely Childish Gambino.

Maddie: As a teen I really loved listening to film scores. John Williams, Alexandere Desplat, and James Newton Howard were probably my top three film composers back then.

Steven: Probably something by The Beatles. Haha, no, I think the first album I remember owning that I bought purely by myself I think was “Pretty Odd.” By Panic! At The Disco. I remember it was a big deal for me because I had gone to a local CD shop and spent my own earned money on it. That album still slaps every time I put it on.

Maddie: That’s a hard one for me to remember, but I think some Glee album that I downloaded off iTunes.

Steven: This is a really hard one, because there are truly so many. If I had to pick just one, I’d probably say Somebody by Depeche Mode.

Maddie: I wish I had written Tiny Dancer by Elton John. Elton was like my piano idol growing up, and his songwriting talents are so insane.

Steven: I usually start noodling on my guitar and try and let something natural flow out until I start digging what I’m hearing.

Maddie: Pretty much the same. I sit at the keyboard and start improvising until something sounds good.

Maddie: Still Woozy has been on repeat for me for the past few weeks. Ooo and also SZA and Snowmine.

Steven: Phoebe Bridgers forsure. She is such an amazing songwriter, all of Punisher was heartbreaking and gorgeous throughout. Plus, she seems like it would be fun to be on tour with her!

Steven: Without a doubt playing a live show and being able to share my music with other people. I don’t think I have a happier place than playing a tune on stage with Dad Hat. It’s been hard not being to do that for the past year or so, but it’s going to be so fun seeing everyone at shows again!

Steven: For me, it’s the constant self-doubt. It’s hard putting yourself out there as an artist and being vulnerable. But at the same time I wouldn’t choose not to, you know? It’s just important to remind myself that I’m doing my best, and that’s what is important.

Maddie: Practicing for me hands down. It’s kinda hard to get myself motivated to practice, and it can be pretty discouraging, but at the end of the day it’s worth the struggle.

Steven: Our jazz band director in college, Albert Alva, once said “I’m not tryna change the world, I’m just tryna swing”. I love that. I think a lot of times as artists everything feels so stressful and huge cause it’s your personal art on the line. But really, you should just step back and relax. Nothing we create is ultimately so important that it is world changing. But at the same time, if you are having fun and spreading positivity, I think that stuff will make its way back to you.

Maddie: The best advice I’ve been given, is that it is not going to be easy, and there will be slow times. It doesn’t happen quickly – it’s an incredibly long process. But just to keep at it and you will make it to where you are meant to be.

Dad Hat's new single 'Tahoe' is available to stream now. Check it out in the player below.

4 hours 1 min ago Following on from the release of their brilliant comeback single 'Oxygen' in recent months, Beach

1 hour 5 min ago Following on from a string of captivating offerings these past few months, proficient artist and