His new single 'Parma Violets' is out now 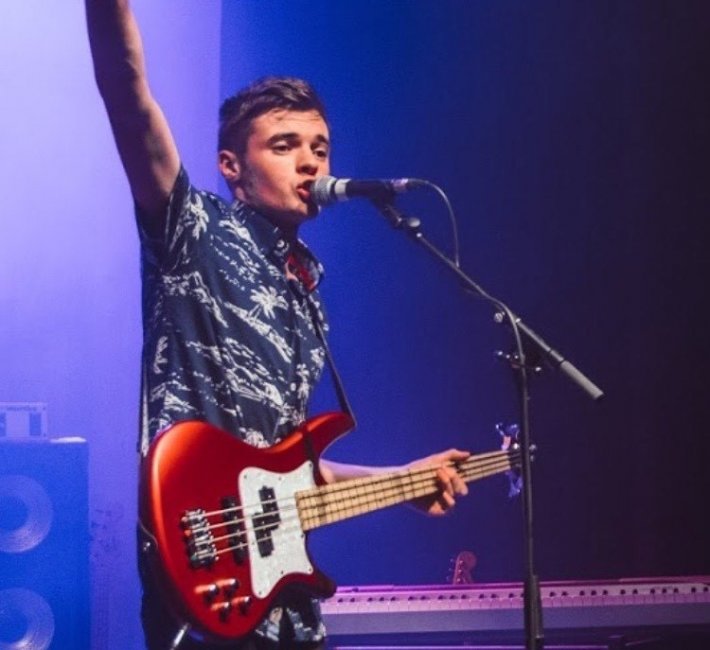 Channelling more of that bold and dynamic pop-rock sound he is cultivating for himself, 'Parma Violets' makes for a wonderfully fun listen. Filled with energetic pace, captivating hooks, and his own catchy vocals layered throughout, things are already looking very bright for this young upstart.

I had been playing guitar for about three years when I first picked up a bass. As much as I loved guitar, I will always prefer to play guitar over the bass. My old band needed a bassist so I gave it a try. And now I will always say that I’m mainly a guitarist and a singer because that’s what I do best but nothing is more fun than playing bass.

Growing up I listened to loads of different music. When I was a little kid I remember my parents would burn their favourite music onto blank CDs and we’d play them in the car. So from about four years old I remember hearing a range of music from Green Day to Lily Allen. During my early high school years I got into a lot of rap music and the first music I ever made was always influenced by artists like Tyler The Creator and Mac Miller. It wasn’t until listening to The Vaccines first album that I switched my writing over to indie rock.

The only album I’ve ever bought for myself in a store was a Green Day live album which was just a recording of one of their concerts. I never even listened to the full thing. These days it’s hard to find people still buying physical copies when everything is online. It only ever happens now really with vinyls. And if I had enough money I’d have a record player and a vinyl of every album I could think of!

It’s a really hard question and I think there are several songs I listen to and love and wish I had written it first. But I’ll have to say I think Do You Really Wanna Know by Sea Girls would have to be my answer as the lyrics seem as though they were written just for me and I connect with those lyrics every time I hear the song.

I can never usually write a song whilst I’m indoors. Even the guitar riffs I have to write while I’m out walking somewhere where there is grass and trees and no people to bother me.

The Vaccines and Sticky Fingers will always hold a special place in my heart but recently I’ve been listening to a lot more dream-pop bands such as Wolf Alice, SPINN and Genghar and shoegaze bands such as Slowdive, Cocteau Twins and Airiel.

I’d probably appreciate opening for Wolf Alice the most as they’ve been a massive inspiration for the music I’m writing now.

Nothing will ever beat the feeling or standing on a stage and hearing lyrics you wrote a year ago be shouting back to you. To stand on a stage and express yourself and see the effect it has on your friends and members of the audience losing their minds jumping around and having a great time. This isn’t the most rewarding part of being a musician. For me it’s the most rewarding part of my life so far.

My whole music career has been a constant battle. It seems nothing has really gone my way. From losing band members and missing gig opportunities. I keep giving my music everything I have and I work so hard for it every day but it’s a very, very slow process. I just have to take every opportunity I can and balance this life and my personal life but it’s very hard and frustrating at times.

I’ve been given lots of advice by several different people in my life. But the one that’s had the biggest impact on me was something one of my colleagues said to me before I quit working as a mechanic to pursue music. He told me something along the lines of “just do it because what have you got to lose. If In ten years time it doesn’t work out at least you can look online and see proof that you gave it your all. If you don’t go for it then you’re always going to look back and wonder what would’ve happened if you did go for it.”

Danny Darlington's new single 'Parma Violets' is available to stream now. Check it out in the player below.

5 hours 47 min ago With their highly-anticipated new album set to land early next year, White Lies have now unveiled

8 hours 35 min ago Having already impressed so many with a flurry of bold and enticing anthems over the last year, D