Getting To Know... The Deep Blue

Getting To Know... The Deep Blue

Their new single 'He Said She Said' is out now 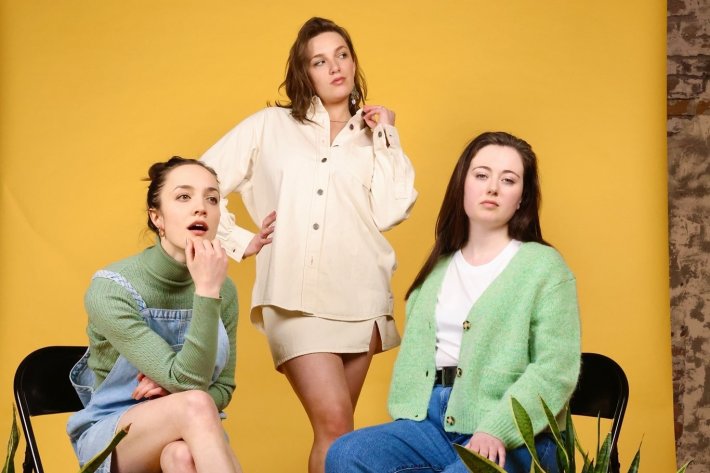 After the enormous praise they received for their breakthrough debut single 'Jealous Sea' earlier this year, Manchester-based outfit The Deep Blue now return with their vibrant follow-up offering 'He Said She Said'.

Lifted from their forthcoming debut EP, which is set to arrive in the near future, 'He Said She Said' makes for a wonderfully warm and uplifting listen. Channelling the same smooth and dreamy direction as Fleetwood Mac and Haim, this new delight is perfect for a long road trip in the summer sun.

Georgia: My Grandpa bought me a tiny-weeny guitar when I was about 10. I learnt the chords to Sting’s ‘Fields of Gold’ so I could sing it in a school show.

Niamh: My piano at home. I used to sit up all night and play songs on it. It’s a beautiful instrument and my family never minded hearing it while they were falling asleep.

Katie: I guess the first instrument I fell in love with was, predictably, the piano! I’ve been playing since I was probably about 7 and loved making up little chord sequences when I first started.

Mmmm...it’s difficult to say. We all have different musical backgrounds and since we all contribute to the songs we end up with a real colourful soup of influences and inspirations. Fleetwood Mac is always there somewhere. We all have a crush on HAIM. Love Phoebe Bridgers and her gritty honesty.

Georgia: I grew up listening to David Grey, Travis and The Cardigans and loved them as a teenager too. I watched The Boat That Rocked when it came out and took a bit of a dive into the 60's and 70’s after that. Discovered Pink Floyde and Fleetwood Mac and then Joni Mitchell. They all did unusual things in their music and I liked that.

Niamh: I loved the music of Damien Rice, Coldplay and Taylor Swift - great songwriters. I was also obsessed with the music of Manchester band Everything Everything.

Katie: I listened to all kinds of music as a teenager, but my love of jazz definitely developed in my teens, and I remember listening to albums by Ella Fitzgerald, Nina Simone, Peggy Lee, Sarah Vaughn, Amy Winehouse etc… I was big on the jazz diva compilation CDs!

Niamh: Mardy Bum by The Arctic Monkeys, I loved the guitar part so much and wanted that feeling of playing in a band, and now here I am!

Katie: For some reason, Simon and Garfunkel’s ‘Wednesday Morning, 3am’ sticks out to me as a song that inspired my passion for music, and therefore to pursue a life in music. Their harmonies and gentleness of their voices created such beautiful imagery for me, and maybe that’s when I noticed how powerful music can be; the effect it can have on someone.

Georgia: AURORA’s ‘A Different Kind Of Human Part 2’ or anything inspirational and upbeat.

Niamh: RnB & neo-soul are always my go-to genres. The vocal agility in the riffs and runs is incredible.

Katie: It depends on how quickly I need to be up, dressed and out the door… if I’m in no rush, then the dulcet tones of Omara Portuondo, a Cuban singer, allow for a relaxing start to the day, or anything of folk/bluegrass nature will do. If I’m stressed, with very little time, I need something with a strong beat to get me moving. 80s pop tends to be a good choice; ‘Major Tom’ by Peter Schilling always works, or even ‘Tusk’ by Fleetwood Mac (perhaps not quite 80s pop but still, the beat gets me moving).

Quite a few! Humans are always doing interesting things and it never gets boring.

We played a gig at Homeground in Manchester a couple months ago and it was bliss. There was this moment when the sun burnt a hole in the clouds and lit up the audience in a glorious otherworldly glow. It was a special moment. We hadn’t seen an audience in ages, they hadn’t seen us. It was a beautiful reunion and it just felt so damn good to be performing again.

Georgia: For me it’s cycling. I love nothing more than to be pedalling up a hill on a blustery day. It’s usually raining because it’s Manchester but even that feels good.

Katie: I regrettably don’t have many other hobbies outside of music… however, I have always had a passion for languages (I speak a bit of French and Spanish), and over lockdown I developed a passion for historical TV Shows, particularly anything to do with Vikings!

Niamh: Making the arts accessible to all, no matter the circumstances. Having the ability to express yourself creatively is incredibly important in my view and I want as many people as possible to have the arts as an outlet.

We all follow multiple paths as it is! I’m a software engineer, Katie is a teaching assistant and Niamh works in music outreach.

The Deep Blue's new single 'He Said She Said' is available to stream now. Listen to it in the player below.

The Deep Blue · He Said She Said

12 hours 1 min ago With their eagerly-awaited new album landing in the coming months, Superorganism have now dropped

15 hours 5 min ago With a bold and blistering array of gems under his belt already, including the breakthrough anthe