Getting To Know... Disco Dicks

Getting To Know... Disco Dicks

Their new single 'Undercover Lover' is out now 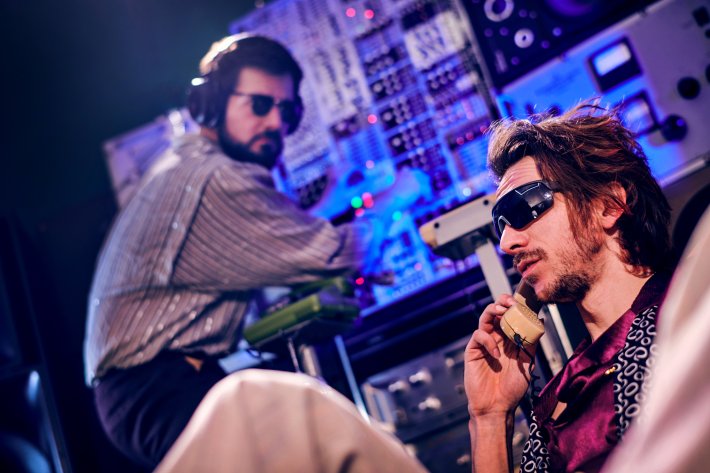 Having established themselves with a stream of bold and driven electro-rock efforts these last few years, Dutch duo Disco Dicks are back once again to unveil their pounding new single 'Undercover Lover'.

Bringing back more of that rich and groove-laden direction they are known for, 'Undercover Lover' sees them return in fine form. Filled with pulsing rhythms, euphoric textures, and some killer hooks throughout, these guys look set to really smash it when they release their long-awaited debut album next year.

Well, my first instrument was the French Horn. I played this for quite some year before I figured the guitar was a cooler instrument. Maybe seeing some kids perform in high school influenced my attraction towards the guitar. I definitely had some moments periods where I was really liking the Horn, but the real love, or addiction, came with the guitar. For me the love for playing in bands and the love for the guitar always really went hand in hand.

When I started playing the guitar at the age of 13 I had like one year of 90s Rock I was digging. When I got a bit of a hang of the instrument I found out about 70s Rock, and this really got me. Back then you had a disk-man with a multipack of CDs in your school bag. I remember that at one point this was filled with only Jimi Hendrix albums. I was obsessed with this man. I think I spent most of my mini earnings on getting all of his DVDs to try to figure out how he is pulling it off. Looking back at it and knowing a bit more context around this era I think it was also the way he sexualized the instrument.

I remember my first single, We’re going to Ibiza, by the Vengaboys, I was loving that haha. At first I stole most of my music from my older brother and sisters room. Then I remember hearing Guns and Roses, Appetite for Destruction, for the first time and thinking, I must have this. I didn’t have any money at the time, so I first went to the record store everyday just to have a listen once. Then at some point I saved up a bit to finally get it.

Saturday night fever by the Beegees. It’s such an iconic song that it changed the way a complete generation was enjoying the nightlife. Incredible.

There was an interview with Peter Gabriel I’ve seen where he described how he often got inspiration for new music. That is to have the drummer put on a song on headphones and play along with it, while the rest of the band just hears the groove he is playing. This is one thing that we always keep doing. Especially when inspiration is low at a point, it really can help a lot, as mainly the only thing you are taking in is the feel/groove of a song, but having it as a starting point does really inspire often.

Parcels, Bazart, Jason Isbell, Dua Lipa. I think the way that Parcels make disco anno 2021 is just amazing. Plus their arrangements and vocal harmonies are just brilliant. Bazart is a Belgium band that really got me hooked. It’s kind of Dance Pop but they just got great songs and it’s really uplifting. Jason Isbell is just a fantastic songwriter, I always have periods where I’m really into Americana and Country, at the moment I’m in one of them haha. Future Nostalgia of Dua Lipa is a brilliantly produced record, it really bangs. I also really love that it takes you on a little time travel, without really noticing it.

Daft Punk, on their reunion tour.

The moment when a song comes together and everyone in the room feels “YES this is IT”. That feeling is incredible.

Shouting out for attention all the time.

Life is to short to make shitty music.

Disco Dicks' new single 'Undercover Lover' is available to stream now. Check out the new video for it in the player below.

1 hour 3 min ago After spending the last few months collaborating with the likes of Ibeyi and Mura Masa, Pa Salieu