Getting To Know... Doctor Payne

Getting To Know... Doctor Payne

His new single 'All The Same' is out now 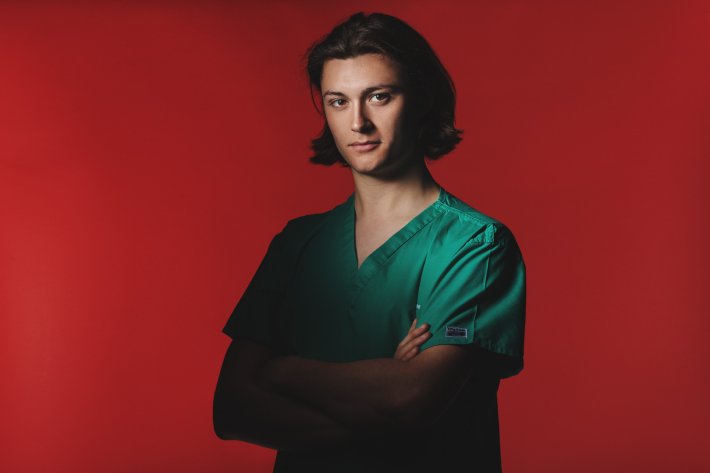 Following on from a string of exciting releases over the last year, Brighton-based artist Doctor Payne has now returned with his glittering new effort 'All The Same'.

Channelling a broad and diverse mix of psych-rock and prog-rock influences from start to finish, 'All The Same' makes for a bold and cinematic listen. Filled with enormous hooks, pulsing textures, and his own alluring vocals throughout, it feels like we are going to be hearing a lot more from him in the months ahead.

The piano. I played one almost every day after school when I was a kid. At first I would teach myself but I eventually met an incredible teacher. I'd get quite defensive about it and how it was the best instrument ever. My school had a lot of opportunities for me to play the piano but I'd always been quite dismissive of the guitar as an instrument out of pure loyalty and pride. Ironically I'd go on to study guitar and pick it up as my other primary instrument.

Though I feel it's been a rough few years for piano in rock music. I've had many conversations over the years about how much I miss seeing piano players who aren't specialised in classical or jazz. Not at all to detract from those styles, I'm also technically classically trained to a degree, though I'd sometimes distract my teacher into more leftfield compositional techniques when I should have been focused on playing scales.

My earliest memory in this way was seeing Marilyn Manson on the TV when I was about two or three. The first band I truly fell in love with was Linkin Park, with Muse coming in a close second. My parents are both very interested in lots of different styles of music, so I grew up listening to a variety of artists. Sometimes it surprises people when I go straight from listening to Slipknot to Bob Marley, but I could pretty much party or go to sleep to either of them.

Some of the first CD's I remember buying are Meteora, Origin of Symmetry and Rage Against the Machine, Self Titled. I stole my dad's copy of Demon Days by Gorillaz and The Clash 1977. and found a David Bowie CD on the floor in a park.

(White Man) in Hammersmith Palais by the Clash, but, to be fair, I wouldn't enjoy listening to it half as much as I do if I'd written it myself.

Any rituals, no none. Habits? I'm a bit weird in that way. I hear the songs in my head and they just re-write and form themselves over time until I'm ready to translate them onto instruments. Sometimes I get weird abstract barriers to a song in my head where I need to head to the piano or guitar to work out how to make a concept exist in real life. Some songs take years, others are ready as soon as they come into my head. I like both. Generally speaking, when I'm doing it you'll know because I lose all ability to focus on anything apart from what's in my head.

Metallica. Close second would be Beethoven.

Your life is very colourful. The more you learn about music, the more you know about music, so it becomes increasingly enriched to you. Being exposed to the complexities of sound and rhythm allows you to think about and perceive the world in a certain way that I find comfortable. Also, if you have the same opinion as me, it is the best job you can have, so the reward is intrinsic.

Somewhat against the cliche that "everyone perceives it differently", meeting someone you can tell perceives music in a similar pathology to yourself is a special moment, especially when you start making music with that person. Part of what gets me about that is how you can see eye to eye with someone in a strangely tribal yet inclusive way.

You're in the business of trying to bring something that doesn't exist into existence every single day. There isn't a template for the industry, and it can be hard to make it through. You're constantly guided by your intuition, so you sometimes wish there was just a shift you could put in instead but, the music doesn't care about any of that.

Turn all the faders up to ten. Not literally.

Charlie Harper from UK SUBS told me that if you were looking at a mixing desk, and each of the knobs and faders were labeled "stage presence, songwriting, recording" etc. you have to try and get them all turned up to ten. I think it's a nice visual way of saying there's always something you can be working on.

Doctor Payne's new single 'All The Same' is available to stream now. Check it out in the player below.

Doctor Payne · All The Same

22 min 1 sec ago Having been exceptionally busy under his Caribou moniker these last few years, producer Dan Snait