His new single 'I Land At Sea' is out now 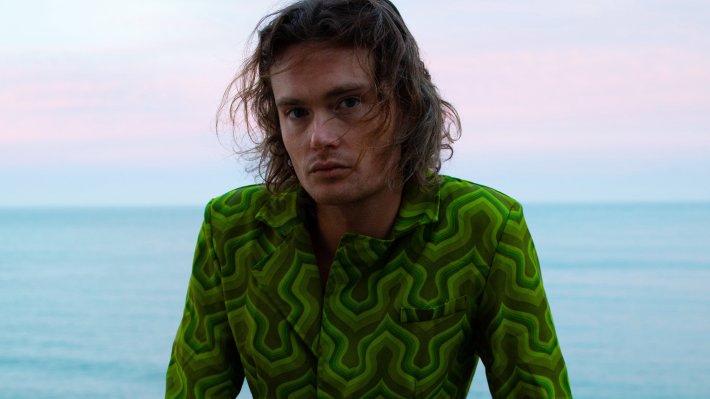 Having already impressed us with a broad and euphoric array of offerings this past year, Irish-Australian artist Dunx has now returned to deliver his latest delight 'I Land At Sea'.

Channelling a smooth and breezy blues-rock aesthetic from start to finish, 'I Land At Sea' makes for a wonderfully warm return from the frontman. Filled with sweeping textures, soaring tones, and his own distinctly rich voice at the helm, he is certainly onto a winning formula with this one.

I started out playing around on a keyboard but as soon as I picked up a guitar I properly fell in love. My brother went away for a week so I stole his guitar and never gave it back after that. It was so much fun to learn, it felt so natural and instinctive. I’d play for hours until my fingers were blistered or I only had a couple of hours until school started.

My family introduced me to so much music, I was the youngest so I inherited a lot of their favourite artists. My mum would play folk classics like Bob Dylan, Leonard Cohen, Van Morrison and Neil Young. My dad loves female singers so there was a lot of Blondie, Kate Bush and Grace Jones while driving around in the car. My eldest brother was a skater and really into punk. He was obsessed with Nirvana so we listened to the MTV Unplugged album on loop. My other brother listened to all sorts - The Verve, Queen, Midnight Oil, Townes Van Zandt, OutKast, Roxy Music.

When I started venturing out on my own I fell in love with the blues, particularly learning the songs on guitar. The blues are so simple and expressive. I also became obsessed with Pixies, Led Zeppelin, Joy Division, David Bowie, Beach Boys, A Tribe Called Quest, The Smiths, The Strokes, Kings of Leon, Radiohead, to name a few.

Ha, slightly embarrassing but I did love these at the time: Korn - Follow the Leader and Offspring - Americana. Obviously I was an angsty little guy! I went out and bought these two albums at the same time, I remember it feeling like a really big deal. That was the start of me discovering new stuff on my own.

The Beatles - A Day in the Life. Such an otherworldly song! I can still so vividly remember hearing it for the first time, it actually kind of scared me with the orchestral build at the end, it carries such an emotional weight. It really couldn’t have been written by anyone else though.

Procrastinate… until I don’t, ha. I wish that was a joke but it’s kinda not. I do like to play around a lot on whatever instrument’s handy, after a while you can get into quite a trance. When something snaps you out of it or your ears perk up you know you’ve hit on something interesting. It’s also good sometimes to just sit down and say, I’m going to write a song now. Often the most unusual stuff can come out of that because you’re coming at it from a slightly unnatural place.

Pillow Queens and Saint Sister are both amazing Irish bands! Inhaler brought out a great album last week. Carnage by Nick Cave & Warren Ellis has been playing in the car a lot too.

I love Big Thief - their music and the whole vibe I’m all about. The last gig I saw was The Growlers in Sydney just before the pandemic - there was such a positive, chilled out energy between the band and the crowd. I could imagine having a lot of fun opening for those dudes. Wolf Alice, Mac DeMarco, Pillow Queens, the list could go on. Pixies would be amazing!

Being able to create as your soul purpose, it’s a pretty rare thing to do in life. I also really look forward to playing live again, it’s such a special space to be. I love jamming with other people, there’s something about playing music in a room with others where you get to places you could never get alone, real goosebump moments.

Having almost too many options and limitless possibilities is sometimes quite a challenge, my brain finds that kind of hard to deal with. You need objectivity a lot of the time and it can be hard to come by when you’re so deep inside of a project or song. I find it particularly hard when producing my own stuff as it’s easy to get a bit precious about things. I enjoy collaborating a lot for that reason.

Put your head down and make music you like, don’t be overly reliant on feedback - compliments or criticism. Embrace what you’re doing and do it for yourself, it’ll inevitably be better than if you go out with some sort of pretence. You’re never gonna please everyone, so start with yourself and the art should do the talking for you.

Dunx's new single 'I Land At Sea' is available to stream now. Check it out in the player below.

12 hours 26 min ago After delighting us with a string of rich and enticing offerings these last few years, Belgium-ba