His debut EP 'Moments' is out now 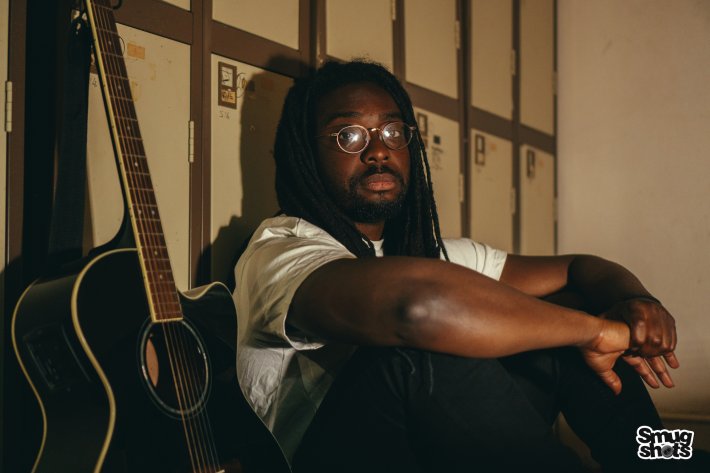 Channelling a bold and eclectic direction from start to finish, 'Moments' makes for a wonderfully enticing introduction to his aesthetic. With its soaring hooks, subtle textures, and his own captivating voice at the helm, things already feel like they are heading in the right direction for this emerging talent.

Originally fell in love with Drumming, used to pretend I was playing in a rock band at Reading Festival, with my mum pots and pans, until I eventually annoyed her into buying me my first drum kit. You can still hear now, when playing guitar, the influence drumming had...1 day, it would be cool to play at least a song, in a live show, in which I drum, and sing at the same time!

I'd say failed relationships with women probably influenced a lot of my music, fortunately, I have no luck when it comes to love. It makes great stories for songwriting, that I think maybe most boys can relate to...

I've always just loved music, never really cared what package it came in. If I was to show you my Spotify liked tracks, there's no real pattern. But i suppose as a teen, I was in a rebellious Rock faze, would listened to bands like System Of The Down, Enter Shikari and the Kooks! But yeah genuinely love music, and always have. Listened to all sorts.

Funnily enough I do...I was quite a shy kid, knew I loved yo sing, but absolutely hated the feeling of being nervous. I remember, in GCSE music, I was caught on film singing 'Beautiful Girls' by Sean Kingston. Got a thousand views on YouTube, and became an overnight "high school celebrity"...enjoyed the feeling of positive attention, and decided to pursue music...

I wake up normally, wanting to listen to acoustic music, like acoustic versions of well known songs. But it genuinely depends on the mood im In. Fridays normally start off with some kind of Garage!

All of my songs, involve people in my life. I'd find it super hard, to fabricate situations, that never existed. So I suppose, all my music is, is originally drawn from emotions I felt with someone I know...

All my memorable moments, come from live performances. Performing is all I've ever wanted to do. I've been lucky enough to support the like of: Mist, P-Money, Cautious Clay...and excited to be supporting Bobby V on his UK Tour in May 2022...my most memorable moments so far cone from connecting with large crowds, but I'm sure, that my most memorable are yet to come!

Biggest passion outside of music, is probably football...I thought id be a football player when growing up. Until I found out I wasn't good enough to play... luckily I was alright at singing too...

I would have been an entrepreneur of some sort, or just the Prime Minister of Barbados.

Make music that you love, don't over think, about what other people like, or what will make you the most money. Just make sure you enjoy creating your art....also surround yourself, with people that genuinely care for you...im so lucky to have the same team now, that I have worked with since I was 13, we get on well, we understand each others goals, values. We want to win as a team. Its so important, that you have the right people, looking out for you!

But yeah, lastly. Just have fun. Art is not meant to be stressful, it's supposed to be a release. If you take things too seriously, you'll find it harder to motivate yourself to create...

Du'val's debut EP 'Moments' is available to stream and download now. Check it out in the player below.

12 hours 51 min ago With their eagerly-awaited new album landing in the coming months, Superorganism have now dropped

15 hours 55 min ago With a bold and blistering array of gems under his belt already, including the breakthrough anthe