His new single 'Out Of Sight (Unplugged)' is out now 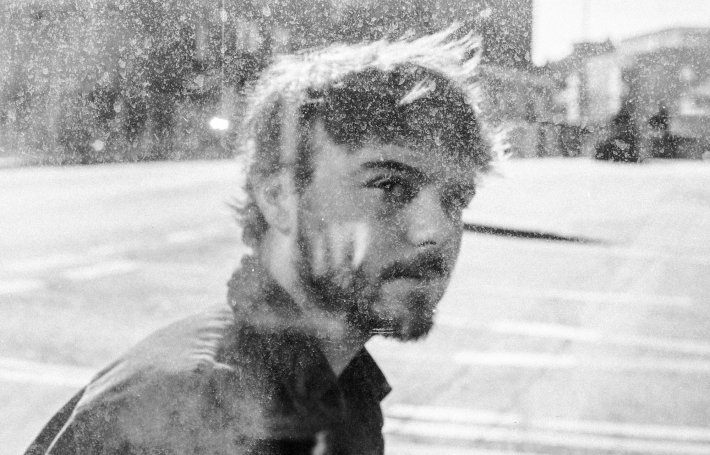 Following on from a string of bold and delightfully offerings over the last few years, London-based singer and songwriter Adrien Latgé aka Easymess recently revamped his 2019 single 'Out Of Sight' with an unplugged rendition.

Adapting to the year of the pandemic and his remote situation during lockdown, the 'Out Of Sight' unplugged version saw him return to his humble roots for this subtle and heartfelt rendition. Stripping back all of the usual fanfare, this humbled and lo-fi release is a warm and welcome return for the artist at the helm.

Drums, very very early. I was the cliché kid hitting pots and pans in the kitchen when I was 2 years-old. I got my first kid drum kit a few years later, I never really stopped playing music from then, tried the piano, guitar, played the xylophone for years as well and all sorts of percussion. I guess percussion is my actual first love, as I don’t know if I can qualify pots and pans “drums” officially.

Oh, you know, teenage years are made of inexplicable waves of very different taste. My first distinct taste was what my parents liked, so all sorts of rock, folk, bluesy things. My dad is a big Leonard Cohen and Direstraits fan, and my mum into folk, 60s rock n roll, and african music. So those were my first musical convictions I’d say, but it all dissolved into an obvious Emo punk/ Alt-Rock phase of Sum 41, My Chemical Romance, 30 seconds to Mars for years, also cause it was fun to drum to ! Then discovered hip-hop, and lots of other things when downloading music became a thing (Limewire and eMule kids will know the joy). Eventually discovered Damien Rice, and it changed my taste and what I liked in music forever.

Youssou N’Dour - Joko From Village to Town. The first album I properly listened to on repeat, I had taken it from my mum’s collection. It became mine as it literally stayed in my CD player, I’d lip sync to songs in Wolof, not understanding a single word. Every single song is a banger and brings a constant smile (and urgent need to drum on something the whole way through). Close second was some sort of Rock’n’Roll compilation with Tutti Frutti by Little Richard on it, and oh what a treat that was too!

In general lots of French songs, as I still really struggle to write in French, even though it’s my native language. But if I could choose one out of the blue, I’d go for “It takes a lot to know a man” by Damien Rice. The words, the arrangement, the movement throughout the song, the creativity, everything is absolutely perfect, but still so incredibly raw in many ways. He’s one of a kind.

Ah that’s the sad part of the interview, all my usual ways of writing disappeared with the pandemic. Usually I just wake up with something on my mind, or not even, and just sit at a café, outside, and try and let people walk by and inspire me. Eventually, if you write about other people, you end up writing about yourself, reflecting on yourself, and getting the introspection you need to write honest words, which is what I care about. If I’ve figured out something about myself at the end of a writing session it means I’ve done a good job. A glass of wine at the pub with the notebook on the table is something I’ve done too, and it’s a sweet treat as well. It’s a whole introspection vibe, and you can feed from social interactions too. So yeah, not a good year for writing for me.

Quite a lot of my friends’ music to be honest, it motivates me to keep writing, and it reminds me that I’m still part of a great music scene, even if we can’t do much together at the moment. Say Anise’s “Say what you want” EP, Brian Grogan’s EP “Rookie mistakes”, Lewisburg, and many more. Apart from that, I’m obsessed with Ben Mazué at the moment, he dropped my favourite album of 2020 I think, called “Paradis”.

That’s a tough question ! Need to consider where they’d be playing too. I guess if I really wanted to treat me to something I wouldn’t know otherwise, I’d say Ed Sheeran, so I can treat myself to a stadium show and see what it’s like. Probably good to hang out with before the show too. And if his fans like his early stuff they probably couldn’t dislike my acoustic tunes too much!

Working with lots of different people, on so many projects, and seeing them all becoming bigger and better, being able to play live with friends on stage, and share the good times with people you love. It honestly is the best thing, and as far as these projects can go, they get more rewarding because the feedback and the reception we get gets greater, and we still share it with our favourite people. So yeah, very grateful for that.

Promoting the songs, trying to reach more people, and being a 2021 artist - meaning that you can’t just be an artist and make music you wrote and perform it. You need to know how to market it, be your own manager, your own PR agency, your own booker, at least for a while. It’s 20 jobs in one, paid in recognition or nothing, and it’s hard to master all those jobs. But as Gillan Welch says, “Someone hit the big score, they figured it out. We’re gonna do it anyway, even if it doesn’t pay.”

AND obviously the pandemic. But I assumed people would have guessed that answer. The whole “not working and playing on stage for a year” thing. That’s a touch frustrating.

The one I remember the most came from a good friend of mine when I started songwriting in high school and I didn’t know what to write about. She said “Get your notebook out, empty your head completely, leave nothing in your mind, free it completely. There’ll be something left, something that you can’t get rid of. Write about that thing.”

Incredibly useful, and for everyone who wants to write anything I guess, to start somewhere.

My advice for anyone would be to play with as many people as you possibly can, we underestimate how naturally inspired by people we can be, and how enriching versatility of genres and of people can be.

Easymess' new single 'Out Of Sight (Unplugged)' is available to stream and download now. Have a listen to it in the player below.

EASYMESS · Out Of Sight (Unplugged)

2 days 11 hours ago After impressing so many with her brilliant debut EP 'Talk' earlier this year, fast-rising 17-yea