Her new single 'Pressure Points' is out now 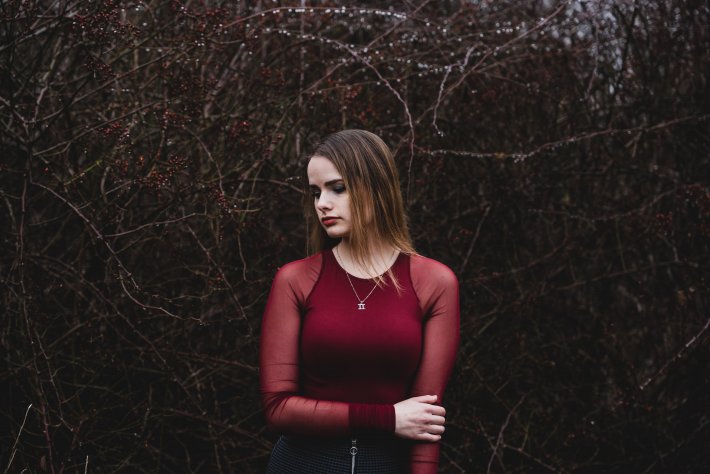 After dazzling us with her brilliant singles 'Borderlines' and 'Saok' earlier this year, which have since gone onto garner more than 20k streams on Spotify alone, US artist ELUNIA is back once again with her captivating new cut 'Pressure Points'.

Co-produced alongside the ever-impressive JMAC (Haux, Luz, Matilda Mann, Rosie Carney), 'Pressure Points' sees her deliver one of her more atmospheric efforts. Jam-packed with sweeping tones, lofty aesthetics, and her own spellbinding voice at the helm, she is certainly on track to become one of the most talked about new artists of the year so far.

So with the new single doing the rounds, we sat down with her to find out more about her background and what has inspired her most over the years.

Definitely the piano. Growing up, I was the kid who tried every instrument under the sun, but the piano always stuck and it’s still where almost all of my songs begin. I think it came the most naturally to me, and I loved how freely I could express myself on it when I started songwriting. I took piano lessons for years, but I never felt inspired just learning songs. I would play with the songs and try to make them my own, and I had more fun experimenting with keyboard sounds than actually playing, which probably frustrated my teacher to no end. It’s no surprise that I became a producer.

I was always fascinated by pop infused with electronic elements. I remember my parents implying that one day I would grow out of my synth obsession and start to like rock or something (they had no idea where my musical taste came from). It never happened. When I was about 14, I discovered more innovative pop artists like Ellie Goulding, Lorde, and Troye Sivan, which definitely influenced me at an impressionable time when I was developing my writing style.

It was 100% the Jonas Brothers’ self-titled album when I was about eight. I played it over and over on a Walkman. Should I make up a cooler response? (I still know all of the words.)

This is so hard. I think I’m going to have to go with “Easier” by Mansionair because there’s an indescribable ache in that song that captures a universal human emotion so perfectly. It’s pure genius.

My writing process starts with what I call “song fragments.” I’ll hear someone say a word, or I’ll see an interesting phrase, or I’ll think about a situation in my life in a new way and feel compelled to stop whatever I’m doing and write down a fragment in my notes folder on my phone. There are over a thousand song fragments currently floating around inside that folder on separate notes, each containing one or two lines, a full verse, or even just a single word that happened to speak to me. When I go to write I draw from those fragments and rearrange them like fitting together a puzzle.

Recently I dove head first into the world of Glass Animals. It turns out that there’s no coming up for air. Also, Josef Salvat and PLGRMS’ new music is breathtaking.

Broods. Their live show has had such an impact on me, and I feel like we’re on a similar wavelength of energy. Every single time I see them I definitely am that person crying in the front row.

I think it’s the cathartic feeling that everything happens for a reason, and that hurt can turn into something beautiful. I’ve experienced a lot of isolation throughout my life and felt different because of my mental health struggle and the suffocating situations of bullying and exclusion that I’ve been in. It was so therapeutic to turn that into something meaningful – it felt like a way to almost justify the things that happened to me, like everything I went through would be worth it if I could capture it as a song. This ties into others connecting with the music as well – hearing other people’s stories of how my songs resonate with them is a surreal and incredibly rewarding thing.

I am, and always have been, the definition of a perfectionist. Although this allows me to be hyper-focused, it’s frustrating to lose sight of the big picture and have to constantly remind myself that art is never truly perfect.

It was actually something that VÉRITÉ said to me recently. She described the path to a successful music career as being like a train that everyone is desperately trying to get on, and said: “The train car’s full. Take a different train.” That analogy of carving your own unique path is definitely going to stick with me forever, not just in music, but in life.

ELUNIA's new single 'Pressure Points' is available to stream now. Check it out in the player below.

22 hours 57 min ago After developing her sound and style watching her Dad play Irish trad music, and seeing her grann