Their new single 'Festival Door' is out now 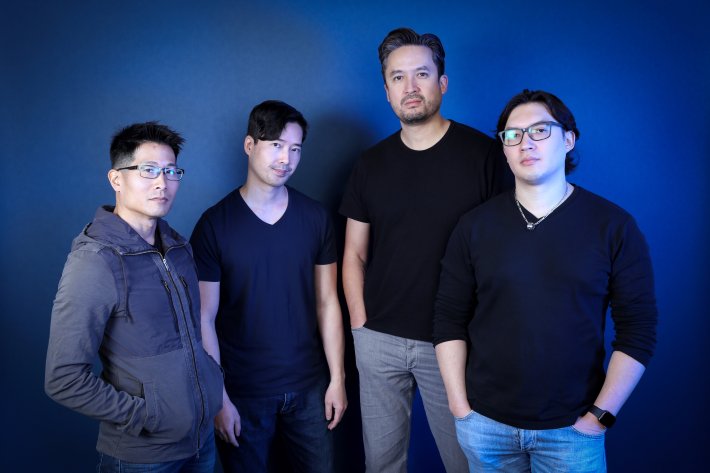 Following on from the release of their much-loved 2020 EP 'Wavelength', Canadian outfit Emblematics are back at it once again as they deliver their euphoric new single 'Festival Door'.

Lifted from their forthcoming new EP 'Navigation', which is out on the 22nd April, 'Festival Door' offers up more of the same shimmering and driven indie-rock direction they are known for. With its spellbinding atmosphere and soaring textures layered throughout, we can't wait to find out what the rest of this EP has in store for us.

So with the new single available now, we sat down with Michael Yun (vocals, guitar) and James Yue (keyboards) from the group to find out more about their origins and what has inspired them most over the years.

Michael: It was definitely the guitar. I grew up in a very typical Korean household, taking violin and piano lessons as a child, but totally quit both almost as soon as I started. But when I was a teenager, I began fumbling around with a cheap guitar lying around in the house, and played it endlessly, strumming along to Beatles records.

James: I would have to say the piano. I began lessons early on at the age of 5, but I absolutely hated playing because the instruction was all very technical and structured. On top of this we didn't have an actual piano at home when I first started, so my dad bought me a book that had a few octaves drawn on the back pages so I could practice on that. The only time I actually got to hear what I was playing was once a week on my instructor's piano. When Mike and I met in university and he mentioned he wanted to start a band, I actually jumped on at bass; but over time we figured adding keys would really fill out our sound, and my piano training came in handy. I soon realised how versatile the keys can be in filling out a song, especially when playing with different synth sounds.

Michael: I grew up with the Britpop era, and that’s still my favourite period of music. I loved Blur, Oasis, Suede, Pulp, Supergrass, etc. It might not sound like a big deal to a UK based outlet, but I’m Canadian, and media coverage of these bands where I grew up was pretty sparse. So it was always kinda cool to see Damon or Jarvis on TV, just cause it didn’t happen very often.

James: I never really stuck with one genre of music growing up, but if I had to narrow it down I was more into pop-punk bands like Green Day, Blink-182, Sum 41, and alternative rock bands like Weezer, Red Hot Chili Peppers and Nirvana. As I got older my musical taste tended to mellow out and I started listening to a lot of Keane, Coldplay, The Killers and The Beatles.

Michael: If I’m being honest, the first album I bought with my own money was probably a Mariah Carey record. Haha, if I’m being even more honest, I still listen to it now.

James: My first tape was the "La Bamba" soundtrack. I had just gotten one of those yellow Sony Sport Walkmans and I needed something to play in it. And I thought Lou Diamond Phillips looked pretty cool on the cover (I had never actually seen the movie). My first purchase of music I was actually interested in listening to was of Green Day's Dookie and Moist's Silver CDs. Watching the Basket Case and Silver videos really ignited my interest in music, and I still have both copies to this day.

Michael: This is a ridiculously hard question, cause there are so many. Right now, I would say “Two Weeks” by Grizzly Bear, I was obsessed with that song when it first came out. I really love the harmonies, the plinking piano riff and Chris Bear’s really inventive drumming. I’ve been trying to write a song like that for years.

James: Here Comes the Sun by The Beatles. I find it's such a balanced song in that it is simple and light, but very driven at the same time. The flow of the melody is casual and beautiful, but the message is very clear and succinct. Definitely one of my all time favourite songs.

Michael: There’s always a period of complete procrastination, followed by a crazy writing session where I record as many little fragments of melody that I can create in a 1-2 hour window. I usually repeat these writing sessions a few times, and then eventually listen through all the incomplete fragments and figure out which ones are worth finishing up.

James: To get inspired I'll usually pour a glass of Scotch, watch music videos of bands I like on YouTube, and then go fiddle around on the keys. Most of the time I'll record the chord progression on my phone and hum a melody to set a foundation, and then leave the recording for a while and come back to it to write lyrics (or sometimes I forget about it entirely!). Mike is the composer of our band's music, and to be honest I prefer just playing along and not having to carry a song like he does.

Michael: The new Beach House album just came out, and I’ve been listening to that on repeat lately. It’s a double album and it’s pretty dense, so there’s a ton to digest. I’ve also been listening a lot to a Vancouver artist named Ian William Craig. He has a classically trained voice, and makes experimental soundscapes with tape machines, it’s a wonderful combination. Preoccupations also, they give me my post-punk fix.

Michael: Right now, I would say Mitski. She is such a captivating artist, and her new album is really great too. It would be awesome to open, and then sit back and watch her performance. Oh and Paul McCartney too, just cause he’s my favourite Beatle, and he’s still out there touring.

James: It would definitely be Keane. I think our music goes well with their style, and it would be really cool to play with them. In fact, during our university days Mike and I took a road trip from Edmonton to Vancouver to see them live. At the time I had never actually heard of them, but I figured it would be a nice way to get out of town. I instantly fell in love with how keys driven the band is, and how simple, yet full, their sound is. That concert alone really got me interested in being a part of this band and renewed my love of playing the piano.

Michael: I really do love the idea that a song you write in your bedroom (conjured up from nothing) can eventually make its way into the ear of a random listener, and spark up some sort of positive emotion in them. I think it’s really amazing that a song can change someone’s attitude or outlook, hopefully for the better.

James: I really enjoy playing live. It's gratifying when people are either bobbing their heads or tapping their feet to the music, even if they're in the midst of a conversation and not really paying attention to us. It's nice to see our music hit people on a subconscious level to the point where they are enjoying it without even realising it.

Michael: It’s pretty hard to stand out as a musician, when there are possibly a billion songs or artists out there, all vying for the same attention. I’d imagine that frustration is pretty universal for almost every musician out there.

James: Lugging around, setting up and tearing down my equipment. I usually play live with two sets of keys, so it can be a bit much to get set up. Luckily our drummer always offers to help!

Michael: Just to try and stay on an even keel. There are constant highs and lows if you make music and are releasing it to the public, and sometimes, you feel like there’s no point. But for us, we’re just trying to enjoy the ride and make songs that satisfy our creative itch. Also, consume the majority of your beer after your set is done, and not before.

James: Even if you mess up on stage, no one will notice it! Just play through the mistakes and the essence of the song will come together no matter what.

Emblematics' new single 'Festival Door' is available to stream now. Check it out in the player below.

10 hours 51 min ago With her eagerly-awaited new remix EP landing next month, Bess Atwell has now shared the next cut

13 hours 46 min ago After an astonishing run of form throughout his releases over the last decade, South African sing