His new single 'Blue Sun' is out now 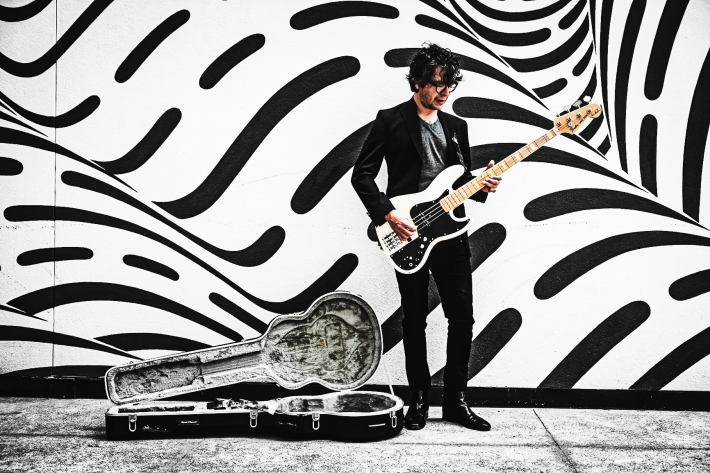 Following on from the release of his brilliant EP 'Rockn Roll Is A Feeling' near the beginning of the year, Oakland-based artist Everything But The Everything has now returned to share his vibrant new offering 'Blue Sun'.

Teaming up with vocalist Olivia Barchard for the release, 'Blue Sun' sees him channel a rich and soaring psych-rock aesthetic this time around. Filled with shimmering aesthetics, soaring hooks, and a blistering pace throughout, this new effort perfectly illustrates the pulsing agenda he has been cultivating so far.

The guitar was the first instrument I fell in love with. The Fender Strat to be specific and it was all because of the movie La Bamba. Bass was forced on me since I wanted to play guitar in a band but didn’t know how. They needed a bass player and that was that, I was the new bass player. I'm happy with the way things worked out because I truly do love the bass guitar. In the mid 2000’s I took lessons from Jerry Mark, an older musician who runs the sessions from his house. He taught me a little bit about music theory and he broke down what bass is, how it drives the music and most importantly how it moves our body’s as we listen. His lessons changed my perspective not just about bass but about music.

I would have been utterly clueless to great bands if it wasn’t for my sister Yadira that was always in tune with new artists and their releases. She introduced me to bands like NIN, The Cure, Nirvana and so many more. I listened mainly to punk rock, bands like NOFX, Bad Religion, Final Conflict as well as local punk rock bands like Riff Raff, S.T.U.B., and Chances Are. I remember when AFI was a punk band and seeing them perform in Santa Cruz. My sister and I, like so many others, were children of MTV and watched music videos around the clock. The song “Once bitten twice shy” by Great White was a guilty pleasure of mine. I think it was the portrayal of the rock n roll life that I dug as a teenager from a small town. It's a terrible song.

This is a difficult question for me because when I decided to become a songwriter, I was motivated by artists like Roosevelt, Dirty Vegas and Bonobo, all who write synth heavy, super produced material. My music comes out sounding much more simple, almost elementary in comparison to those artists. While I may secretly wish I could have written “Blinding Lights” by the Weekend, my reality is that with my capability, I would probably write something along the lines of “What I Like About You” by the Romantics.

It’s pretty much clockwork at this point. I fiddle with patterns on my bass guitar to a drum machine, changing the tempo and style. Once I have something that has potential, I will write out the entire song (verses, bridge, choruses) on bass and track at the studio with my producer Rex Sherlverton. Then I start building guitar and synth layers. The only thing that's changed recently is that I’ve been sending out the bass demo to a few select people like Moog magician Andrew Gomez(NRVS LVRS) and accomplished songwriter Adam Brooks(Dangermaker) who add wrinkles to the sound. In the past, I would have finished the song first then sent it out to collaborators.

I get motivated by artists on the grind, so I listen to Vacances, Melotika, Golden Plates and Amor Amor. I really dig how each of them is pushing the envelope, paving their way as they continue to put out great music. Established acts like Day Wave, Wild Nothing and Holy Ghost dominate my Spotify playlist and due to the Bee Gees documentary that debuted on HBO recently, I’ve been rocking some Bee Gees as well.

It would be a toss up between Depeche Mode or Interpol. I feel like I owe so much to them as far as inspiration when writing music. Also watching them perform from the wings of the stage would be pretty cool.

Working through the song's problems is like figuring out a puzzle or untangling a large ball of yarn. You get stuck and you look for solutions. When you find those notes that open the gates to new ideas, it is just such a rush. Alson rewarding are the out of nowhere contributions from those involved. The drummer Landon Cisneros came into a session recently to work on new material and completely changed the feel of a song with his drum take. It was so out of left field and fit so perfectly that it left us in awe.

Not meeting deadlines can be frustrating but as I’ve learned that comes with the territory of being a collaborative project and not a band with members. Everyone involved has their own band or projects that are their main and first priority. I feel blessed that they make time to help me out because without them the music would suffer. Lately I’ve been frustrated with my distortion pedals. I’ve realized that I need to work on that part of my sound because it could certainly be better. It’s all fuzz and no crunch. We gotta keep pushing.

The best piece of advice I’ve received as a musician is to let the song do what it wants. Sometimes we try to force the song to bend a certain way or go in a certain direction but if you take a step back and let the song dictate the flow, it seems to always work out for the best.

Everything But The Everything's new single 'Blue Sun' ft. Olivia Barchard is available to stream now. Check it out in the player below.

Everything But The Everything · Blue Sun featuring Olivia Barchard

3 hours 27 min ago Following on from the release of their highly-praised 2020 sophomore LP 'So When You Gonna...', D

1 day 23 min ago Having already found huge support for his run of releases over the last few months, progressive a