Their new single 'Mrs. Tambourine Girl' is out now 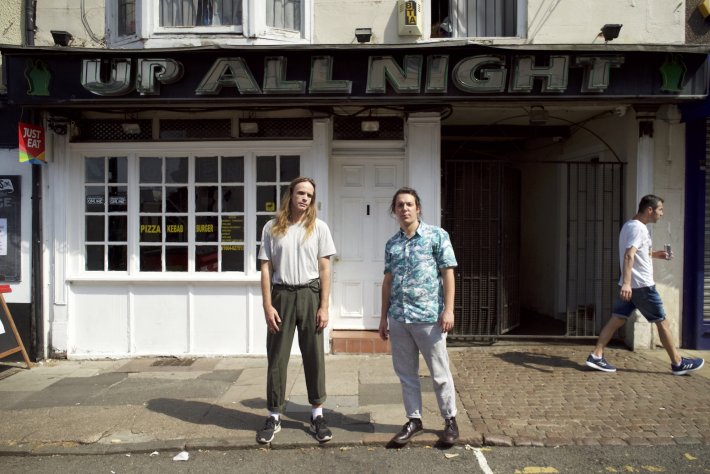 Following on from the enormous support they received for their debut single 'Counting Down The Suns' earlier this year, emerging London-based duo Ex En Provence have now returned with their glittering follow-up 'Mrs. Tambourine Girl'.

Channelling the same vibrant art-rock sound as acts like Everything Everything and Alt-J, 'Mrs. Tambourine Girl' makes for a highly engaging listen. Filled with sweeping 60s psych-rock aesthetics, killer hooks, and a unique direction throughout, we can't wait to hear what these guys cook up next.

So with the new single doing the rounds, we sat down with them to find out more about their origins and what has inspired them most over the years.

Jan: I saw a music video from the band A-ha and they had keyboards, I thought this would the solution to create all the sounds possible, which is kind of true but obviously there is so much more.

Samuel: When I was 8 years old I wanted to be a concert pianist! I played Chopin's prelude in E-minor at school (still one of my favourite pieces).

J: I went through phases, my first love was an Elvis tape, then techno and with bands like the Prodigy I realised there are no limits of styles.

S: I think maybe Spice-world from my French uncle and a French Planet rap compilation.

J: We might meet at a Cafe, having a laugh for 30 min coming up with a concept or some idea of what we are going to do. Then we set up a few synthesizers and play around with some rough musical ideas. This might spark Sam for a flood of words that we try to squeeze in a couple of verses and a chorus. To test the rough idea Sam blasts it at the bar he is working at.

S: Yes! We’ve had to adapt to the world slightly as we’ve been writing songs from different cities Berlin and London this year with travel bans etc but actually the process is as fun as ever, combining lyrical back and forths on WhatsApp, sharing inspiration and ideas through the cosmos and doing video songwriting sessions.

J: I got into drone music, I love Alessandro Cortini and I like weird mixtapes on Soundcloud or some online radio stations.

J: You create something out of nothing that becomes a manifested thing.

S: Being able to cope with the world through release and creativity.

J: I just talked to a psychologist about creating art and she mentioned that despite the overall known idea that making art is helpful it can go the other way when you define yourself by success or through your music. As it’s a constant up and down with the external way of how your music is perceived and the sheer amount of records released all day, there is frustration around any corner. Unless you just make the music cause you just love making it, which is reward enough.

J: When I was 10 I was watching this soul singer, his name was Budge and after the show I talked to him and asked him how he is getting all the people so involved and if he doesn’t have stage fright. He said: “Look, if you have fun on stage, no matter what you do up there, it will translate and be contagious.” I try keeping this in mind if things go wrong and you would normally think: I want to disappear in the ground, instead enjoy the madness.

S: I was told by a good tutor at school from a cult band called The Weather Prophets.... pick a good band name, find your sound and keep going!

Ex En Provence's new single 'Mrs. Tambourine Girl' is available to steam now. Check it out in the player below.

5 hours 18 min ago Following on from the enormous success behind their recent comeback single 'Cloud 9', which has s

1 day 8 hours ago After delivering his much-loved EP 'Back Then' earlier this year, LA-based artist Friends Don't D