His new album 'After The Rain' is out now 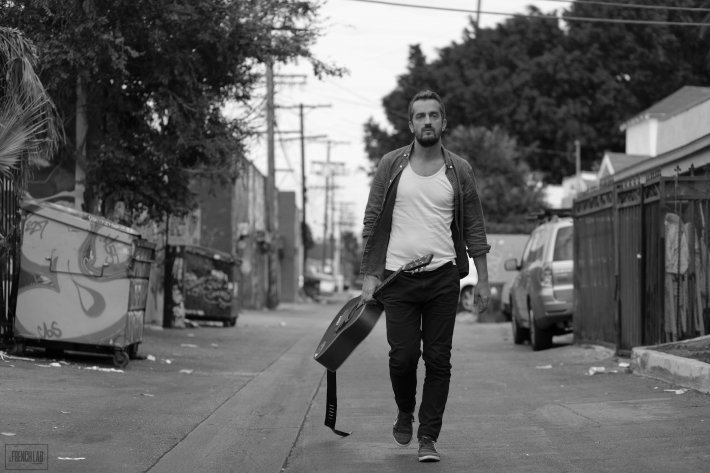 Having spent the last few years releasing a flurry of rich and enticing offerings, French singer and songwriter INDOLORE is back once again to share his captivating new album 'After The Rain'.

Channelling a warm and laid-back groove from start to finish, 'After The Sun' makes for a beautifully rich and uplifting listen. Jam-packed with subtle tones, vibrant production, and his own glittering songwriting pushing the record forward, this is definitely one to put on after a hard day's work.

So with the new LP available now, we sat down with him to find out more about his background and what has inspired him most over the years.

The first instrument I really enjoyed playing was the saxophone. I abandoned it in a corner for several years to finally pick it up again with great pleasure (to my own surprise) on this last album. Then the piano and the guitar came into my life. They never left me since.

I'm afraid I'm not going to sound very original on this one. Love has always been my main source of inspiration. Mostly stories of ruined love, damaged love, lost love. But lately, my point of view has changed, my state of mind as well. I look for the light between the verses. My music has slowly become filled with optimism. It happened without really meaning to. Today, I am more inspired by the most simple moments of happiness, like a ray of sunshine, a child's laugh, or a glass of good (or even bad) wine.

It's confession time :) My wildest (and most delicate) teenage years were in the late 80s. So I'm not going to beat around the bush here, we were in the middle of Madonna madness and a whole bunch of one hit wonders. If I tell you that I sometimes move my booty to Rick Astley or Samantha Fox, I might lose some fans (and your consideration), but it's true! Having said that, I was lucky enough to catch up on major records like Peter Gabriel's "So" and Paul Simon's "Graceland" at the same time. By the way, I remember wanting to play this particular record on the school bus, I experienced a great moment of shame and distress. The pretty Sophie who was in my class wouldn't go out with me after that. Good music can be painful sometimes.

It happened completely unexpectedly in my mother's car, the day after I turned 17. I had just bought a jazz cassette for my father (who didn't really like it by the way but anyway...). Out of curiosity, I inserted it in the player while waiting for my mother (it's crazy how much time I spent waiting for my mother during those years). And there, I took the sound of Charlie Parker in my face. Since that day, I have always tried to express myself through music, first instrumental and then in song.

Those days, I can't get out of the Beatles and post-Beatles period between 69 and 72. When they were breaking away from each other and reinventing themselves on their own. Fascinating. I'd probably put on Paul (& Linda) McCartney's "Ram On" to start the day.

Not enough! I spent a lot of time writing about my little worries. On this latest record, I'm particularly proud of the song 'Alicia Stone'. This time the inspiration came from this woman Alicia, who has been homeless for many years, in the very same street where she used to live. I saw her interview on the internet and her story touched me a lot. I hope her situation has improved, I'm trying to hear from her.

It's funny you see, you're asking me this question and I should be answering: SXSW in Austin, my first gig at the Hotel Café in Los Angeles, or all these streams from all over the world (which make feel really good). No, what comes to my mind is this tiny little pub in the middle of Wales. I was waiting for my turn to go on stage. I was upstairs. I was alone, rather terrified. I was wondering why I was there, why I was doing this, until I realised naturally (just seconds before I was due to sing) that there were no questions, no answers, it was just about being, being there and now.

I love to travel, to meet new people, to find myself in situations where I have to come out of my shell. Music allows that. It's a great fortune. I can't wait to get back on the road, as I please, a bit like a troubadour, without the costume!

In reality, I am already following several paths in parallel. I am also an engineer, now a communication consultant, and I earn my freedom this way. I used to be a full-time musician but I think I prefer the balance I have found today.

The only advice I could give, career or no career, is to go for it, to produce the best records you can, never compromise, keep your independence and enjoy your freedom of action. No matter what anyone says, people want to hear a personal voice, an authentic story. And the only way to be original is to be yourself. There is no other way.

INDOLORE's new album 'After The Rain' is available to stream here. Check out the record's opener 'Let The Sun Come' in the player below.