Getting To Know... Jack Frohlich

Getting To Know... Jack Frohlich

The frontman's new single 'Superhero' is out now 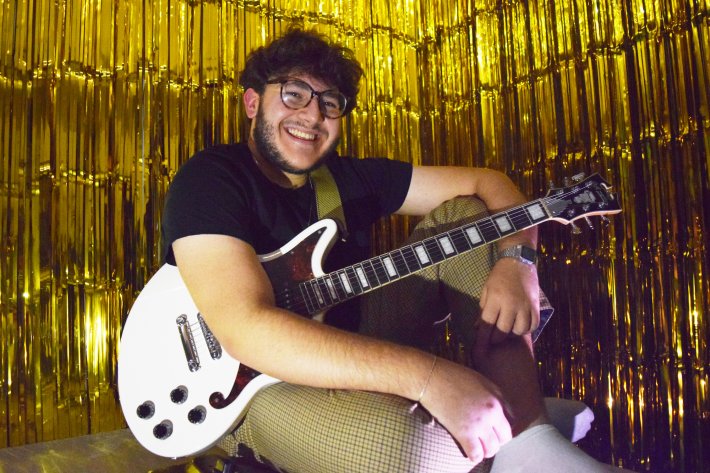 As an artist that looks to incorporate distinct elements of indie rock/pop throughout his work, Birmingham's emerging singer and songwriter Jack Frohlich now looks to deliver his light and uplifting new single 'Superhero'.

Lifted from his forthcoming debut EP, 'Superhero' sees the frontman take his cues from the likes of Oscar Lang, Declan McKenna, and The Magic Gang. Filled with bright and breezy tones, smooth hooks, and some wonderfully captivating vocals, this new delight will have you bopping along in no time.

So with the new single out and about, we sat down with Jack to find out more about his background and what has inspired him most over the years.

The first instrument I fell in love with was the drums. I played for about 7 years since I was 10, playing in a Jazz band for around 4 years where we would play receptions for formal dinners and other functions. That band is also how I met my producer Parsley Palette, as he was the saxophonist at the time. I think the drums being my first love has really influenced my percussive and rhythmic guitar playing, as well as that Jazz band being the inspiration for the first set of songs I learnt on guitar, which were all Jazz standards like ‘Fly Me To The Moon’ and ‘Misty’.

I would honestly say that the first Jazz band I was in has inspired me most prominently. It forced me to learn the structure of Jazz standards and even basic structures of chord progressions before I even picked up a guitar. From there it was a jazz wormhole, from the standards, to more contemporary artists like Jamie Cullum and Gregory Porter, which then led me to my fascination with more complex pieces by Kamasi Washington, and Jacob Collier, who is now easily one of my all time favourite artists. Once I had entered that wormhole there was no getting out.

I really went through the genres as a teenager. I didn’t really start listening to music until I was 11 when I got my first smartphone, but when I did it was the classics like Oasis, Arctic Monkeys and The Killers. As time went on I entered my Jazz phase, which has never gone away, but did sit in the back seat for a while. Then came the rap phase, where the main artists I was listening to were Eminem, Stormzy, and Logic, which came to a swift end after I found indie music – it was an awakening of sorts and I haven’t really gone back since. Artists like Rex Orange County, Boy Pablo, Clairo, Dayglow, Cosmo Pyke, and Declan McKenna really changed the way I listened to and approached music. That’s not to say I don’t stick on the occasional Stormzy track, but indie and jazz have really stuck with me.

My real life experience has always been what inspires me to make music. Whether that be growing up and being scared of the vulnerability that comes with that, like in my latest single ‘Superhero’, or not wanting to go to a party when I was 16 and the deeper emotional implications behind that, like in ‘I Don’t Want To Go’ off of my first EP ‘The Illustrations’. I find that writing songs is quite therapeutic as it gives me somewhere to openly write my deepest fears and concerns in life – it makes them tangible in a way, and then to share them to the world makes them that whole lot easier to deal with.

At the moment it has to be Declan McKenna and Oscar Lang. Both artists are killing it at the moment and are both huge inspirations. I’m hoping to see both of them live once guidelines allow bigger live gigs to take place.

Naturally, because all of my songs are about real life experience, there are a lot of real people included in my music. ‘Doom Bar (The Bedroom Tape)’ is a perfect example of this, mentioning my mum, and one of my close mates from university, who we refer to as ‘Big Ben’ in our group. There are also other times when people are referenced but in a more subtle fashion, like in ‘I Don’t Want To Go’ I reference someone in the line ‘it feels like we’ve only met once at Edgware station’. Even though I don’t remember who exactly, I do remember having someone in mind when I wrote that line.

It has to be my first festival being online due to Coronavirus. Setting up a camera in my garden and then playing a set to myself was a very strange moment, and one that awakened me to the situation the arts in the UK was really in. Even though I’ve played a couple of socially distanced gigs, as well as two more coming up, it’s still a very unusual scenario to be in as a growing artist, and I just hope we’re back to ‘proper’ gigs soon.

It would have to be Declan McKenna. He has inspired so much of my work, and his shows, from what I’ve heard, are absolutely electric. As a performer and an artist he is someone I really look up to, so it would be such an honour to open a show for him.

I’m currently at The University of Birmingham studying Biological Sciences, so if it weren’t for music I would probably do something related to that. I didn’t go into university with a plan, so it’s lucky that music has come along to save me a bit!

The best advice I have received so far as a musician is “only work with people you like or respect”. There is no point in working with people you dislike just to try and get to the top, because you’ll have a shit time doing it, and start to resent the industry.

Jack Frohlich's new single 'Superhero' is available to stream and download now. Have a listen to it in the player below.

22 hours 43 min ago Following the release of her highly-acclaimed EP 'SHE' near the end of last year, Winona Oak has

1 hour 45 min ago After releasing her highly-praised EP 'Too Much Information' near the end of last year, Israeli a