Getting To Know... Jared Scott

Getting To Know... Jared Scott

His new single 'Missed Out' is out now 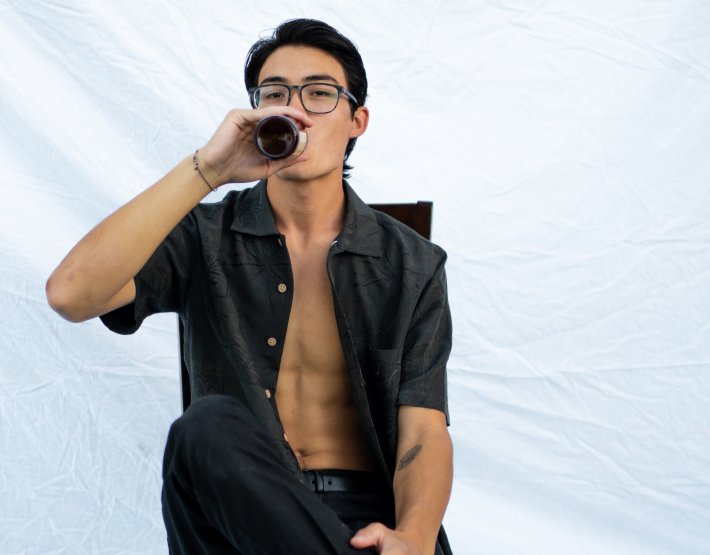 Following on from the release of his much-loved studio album 'Stereoscope' last year, US singer and songwriter Jared Scott has now returned with his latest sweeping single 'Missed Out'.

Channelling a warm and inviting dream-pop aesthetic from start to finish, 'Missed Out' makes for a wonderfully woozy return. Filled with sensual tones, laid-back production, and his own breezy demeanour throughout, he is certainly looking to build a strong sound throughout this year.

My parents actually really wanted me to play sports as a kid so that was kind of my life until I was about 8. I fell in love with the drums and I thought it was always such a cool thing to be able to play so I practically begged my mom to buy my a kit. She said no for the longest time and I remember watching videos just praying I could get a drum set. Finally, they caved and I took my first lessons at 10. Since then music has been my life and love.

I spent a lot of time with my dad when I was younger working on projects he had been working on at the time so I was exposed mostly to what he played. He played Led Zeppelin almost exclusively and every time a zeppelin song came on he’d ask me, “who’s this” and I’d tell him “Led zeppelin!” One time he lent me his iPod for a field trip at school I listened to “Bad, Bad Leroy Brown” by Jim Croce the entire bus ride. So I liked a lot of old rock and roll and 60s and 70s music.

I never really owned albums when I was young but I have a sister who always had some really cool CDs and we would always take long drives in her car and listen to whatever she had burned on them. She was really into John Mayer at the time so it was a lot of Continuum and Battle Studies.

I’ve asked myself this question many times and every couple of years the answer changes so maybe I’m wishing for something that falls in between Father and Son by Cat Stevens, Bohemian Rhapsody by Queen and like Every Frank Ocean song.

The way I write music is very spontaneous. A melody will pop in my head after hearing like a truck beeping or like car keys or an old video of me playing guitar and I’ll just have this quick flash of a song in my head and so I pull out my phone and record it on voice memos. And then I’ll develop the idea later, but writing new ideas happens very, very randomly for me which is kind of fun! Recently though when I am developing an idea I’ll write on a colored notepad (pink seems to me the color rn) and use a new sheet of paper for the verses and choruses because I’ve found it’s a lot easier for me to write a verse at the start of a blank piece of paper. It’s something about not being too influenced by what you’ve already written or getting hung up on the words that you have written down in an attempt to finish the idea. I feel like that helps me overthink much less.

Oh man me and my roommate have recently developed this new love for Benny Sings. I think his tone is just insane. Like each track has this crazy tone for some reason idk maybe I’m crazy. Other than him I have been obsessed with Frank Ocean for a long time and I really love to listen to Cat Stevens, Roberta Flack, The Beatles of course, Fleetwood Mac, Rolling Stones, Mac Demarco and Marvin Gaye. And many more honestly, I listen to just about everything.

It’s such a trippy experience to be honest. Being able to express a feeling or a moment in time with some wood and strings is just insane to me. And really with any type of art, there’s that moment where you drift off and you feel like your body fades away and you’re just in that space. That feeling to me is amazing. If you’ve ever seen the Disney movie “Soul” they capture it perfectly.

The most frustrating part is that disharmony you feel when you don’t feel creative or when you are upset with yourself for not working as hard as you feel you should be. I think sometimes the pressure I put on myself is unhealthy and I know I’m not the only person who does it.

“Grant me the serenity to accept the things I cannot change, the courage to change the things that I can and the wisdom to know the difference.”

Jared Scott's new single 'Missed Out' is available to stream and download now. Have a listen to it in the player below.

5 hours 50 min ago After delivering the first batch of offerings from their upcoming new album last month, Beach Hou

58 min 2 sec ago After establishing herself with some brilliantly bold and inventive cuts these last few months, A