Getting To Know... Jenna Isn't Famous

Getting To Know... Jenna Isn't Famous

Her new single 'Too Romantic' is out now 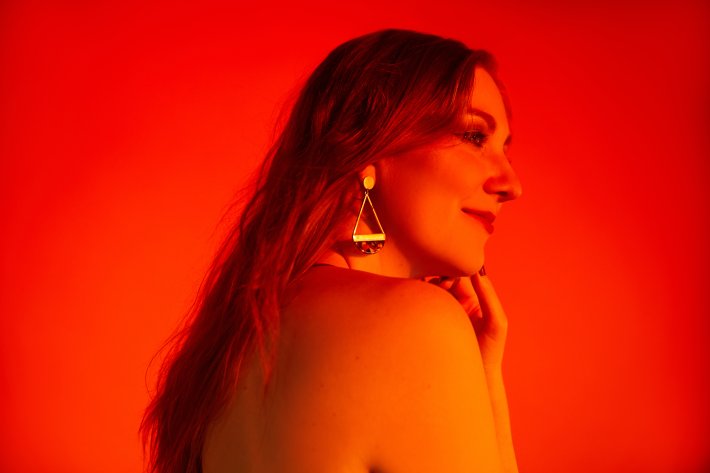 After kicking off her career in the summer of last year, LA-based singer and songwriter Jenna Isn't Famous has returned to deliver her first new offering of 2022, 'Too Romantic'.

Channelling a wonderfully smooth and enticing alt-pop direction from start to finish, 'Too Romantic' showcases her as a brilliantly fresh name emerging on the scene right now. With her transportive voice layered over a bed of broad and shimmering production throughout, she is definitely looking to make a strong mark with this one.

So with the new single available to stream now, we sat down with her to find out more about her origins and what has been inspiring her lately.

My mom had this beautiful baby grand piano - it used to belong to my Babci (grandma) and she had gotten it from her coworker. I always used to bang away at it and sing the songs I knew while playing a discordant pattern on the piano. I always loved that you could really push into the keys when you were feeling extra passionate. Eventually I started taking official lessons in 2nd grade and learning how to play actual melodies and chords, and a few years later I was writing my own simple melodies on it.

I always gravitated towards a lot of girl power pop songs when I was younger. No Secrets, Hillary Duff, Britney Spears. No Secrets had a song called “That’s What Girls Do” that I was obsessed with - just because it was the first song I heard that was made just for girls. Even in elementary school I was very determined to prove that anything a guy could do a girl could do too. My mom also played a lot of Celine Dion in the house and so I also have a soft spot for those sweeping impassioned melodies that made you feel everything. I love a song that has a huge range of dynamics and emotions.

Honestly the two albums that are most locked in my memory are the soundtracks to Confessions of a Teenage Drama Queen and The Scooby Doo movie. So many bangers on both those albums! I was probably nine years old at the time and I remember my cousin, sister and I made a very low quality movie together and used the Confessions of a Teenage Drama Queen album as the soundtrack for our own movie, so it has left a big impression. Boom by fan_3 was such a jam and so was Land of a Million Drums from the Scooby Doo movie. I still go back and listen to those soundtracks, they’ve stood the test of time. It speaks to the power of how music can amplify a movie or tv show and I hope my songs can get placed in one in the future.

I made a playlist called “fave songs of all time” so I went to reference that playlist to answer this question. Right now I think it’s “Beetlejuice” by Mariah the Scientist. The chord progression, the lyrics, the melodies, it is one of the sexiest songs I’ve ever heard and Mariah kills it on her delivery! The tempo is slow enough that it feels like a full seduction is happening, teasing you along the way. I remember the first time I heard it I was like damn - this is something different. It really left an impression.

I almost always start songs in the moment of feeling a big emotion. I rarely sit down at the piano and see what comes out - usually I am feeling some type of way and a lyric or melody bubbles out, and I rush to a piano to process the rest of it.

However, when it comes to completing a song, I do have more ritualistic behavior. Sometimes if I have a hard time figuring out where to go next with a song, I will lay on the ground and try to quiet my brain, distracting it from the task at hand. The tighter grip I have around writing the harder it is for good ideas to come to the surface. So I might have it in the back of my mind that I would like to finish a song today, but I need to let go, maybe go for a walk, hang out with friends, do the dishes, and the idea will come more naturally.

I am currently obsessed with Julia Wolf! She has this really cool half rapping-half singing style. And what she sings about, I haven’t heard many other artists sing about with such breadth. She sings about how she is both shy and confident, how they are not mutually exclusive, and how she doesn’t allow for toxicity in her life. She also has almost an entire discography with no real love songs, and I love that she stays authentic to herself and doesn’t write about things unless she’s truly feeling it.

I am also in love with Amber Mark’s new album. It is 17 songs but each one does something different for the story she is telling and is a necessary puzzle piece for the album as a whole. She speaks about finding love from within before finding external love, having confidence and knowing her worth, and working through her anxieties. The production is pristine and the melodies have been stuck in my head since the release.

I would love to open for Banks. Her concerts have been almost spiritual for me lol. She is so focused while performing and does this weirdly awesome choreography that is just very jolty and so cool to me. And I love her dark vindictive music. She’s my favorite performer and one of my favorite songwriters.

What I find most rewarding is connecting with people, and using music to process my emotions. Sometimes a lyric comes out and I’ll get goosebumps because I didn’t even realize that was how I was feeling until it came bubbling up from my subconscious. It is so cool to have these little monuments of how you were feeling at certain key moments in your life. And performing them and having people confide in you that they’ve felt the same way and the song makes them feel seen, that’s just the most magical thing.

Honestly just how hard this society makes it for any musicians to make any semblance of a living off of their art. Lots of venues in LA don’t pay you unless you bring a certain amount of people, and streaming services pay essentially a tenth of a cent for a stream. And you have to pay a lot of your own money to even make the songs to begin with. It can definitely be disheartening. I hope we are making a societal change to start valuing people over profit in lots of sectors, and that it will bleed over into the music world.

My college clarinet teacher told me to not make my dreams too specific. That I may never know what opportunities are out there that are not even on my radar. For example if I put all my energy into trying to get into one specific showcase, I might not see that there is something else that is even a better fit for what I am trying to accomplish or my values. I think letting go of control is the most important lesson I’ve learned. If I’m chasing something that just keeps escaping my grasp, maybe I need to be patient and focus on my craft, and let it or something even better come to me naturally.

Jenna Isn't Famous' new single 'Too Romantic' is available to stream now. Check it out in the player below.

10 hours 36 min ago With her eagerly-awaited new remix EP landing next month, Bess Atwell has now shared the next cut

13 hours 31 min ago After an astonishing run of form throughout his releases over the last decade, South African sing