Getting To Know... Kone Mara

Getting To Know... Kone Mara

Their new single 'Highway 1' is out now 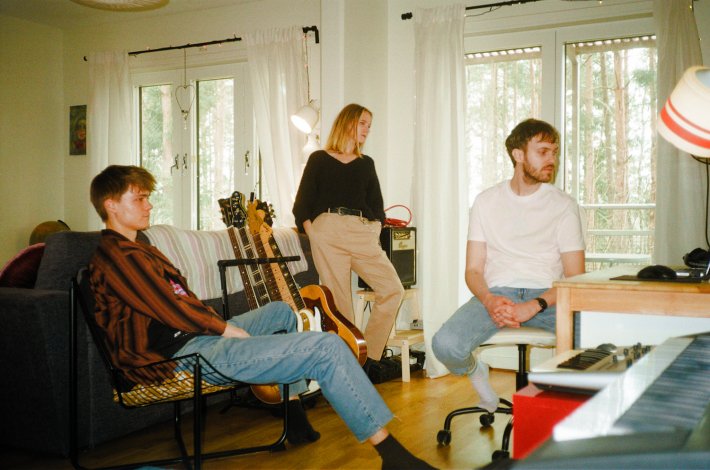 Following on from the enormous praise for their shimmering debut single 'The Ordinary Place' earlier this year, Stockholm-based outfit Kone Mara are back once again with their next stunning effort 'Highway 1'.

Channelling the same sweet and sweeping tones as Fleetwood Mac for the release, 'Highway 1' sees the trio return in stellar form. Filled with glittering textures, a vibrant atmosphere, and some wonderfully woozy vocals throughout, this new one will have you dreaming of road trips in the summer sun from start to finish.

Christoffer: When I was young I always glanced at the old guitar at home and dreamt about being able to play it, but I didn’t try. I just tied a lace around a tennis racket and pretended to play along to my favorite songs. So, I fell in love with the drums a few years after that when I was 10.

Gustav: Dubstep and House only for quite some time.

Christoffer: I grew up during the 90’s so I jumped back and forth between Spice Girls, Nirvana, Backstreet Boys and Green Day. Also I did get my dad to buy me the first Eminem album. I wanted so much to be a cool kid and dig it, but I didn’t.

Ida: Norwegian Wood by The Beatles.

Christoffer: Dance Little Liar by Arctic Monkeys. The lyrics and the sound and feeling of that one is absolutely magical to me.

Ida: I go through notes and poems, drink coffee, talk about everything else but music.

Gustav: Probably struggling with finding something I think sounds original for a very long time then having trouble stopping at all when I find something I like.

Christoffer: I listen to old and new favorite songs of mine. And I ventilate everything that keeps my head busy with my band mates.

Christoffer: Lately I’ve been listening to a lot of Hether, Margo Guryan and Q. I think Hether is my most listened to artist this year.

Ida: Writing music, the feeling I get when I know I’m on to something good.

Gustav: The beginning of creating a song and the end when it's finished and you listen to it over and over again.

Christoffer: That there’s always new things to discover, new songs to come out, new sounds, new bands and meeting a lot of people.

Ida: Self-doubt, overthinking ideas and not being able to relax through the process.

Gustav: Probably when you are very close to being finished with a song/production but can't decide what needs to happen for it to really be finished.

Christoffer: When you’re not making enough money to live off of it, it’s frustrating when it’s hard to find time for the music in between day jobs and school.

Ida: A music teacher once said ”Stop being a coward!” and that has stuck with me ever since.

Gustav: I think allowing yourself to make "mistakes" and "bad" songs and not stressing over every small detail is some of the best advice I have received for actually becoming better at creating music.

Christoffer: I don’t think it’s something I received, but through the years I’ve been playing I’ve seen a lot of really talented musicians close to me giving up on music. I think it’s a shame, so sometimes I think about them when I start to doubt and I imagine that I’ll continue for them.

Kone Mara's new single 'Highway 1' is available to stream now. Check it out in the player below.

21 hours 22 min ago Since launching his Supershy project earlier this year, Tom Misch has proven himself quite the da

16 hours 32 min ago After cementing himself with his breakthrough debut album 'The Collection Vol.1' in 2020, a relea