Getting To Know... The Late Aprils

Getting To Know... The Late Aprils

Their new single 'Clouds' is out now 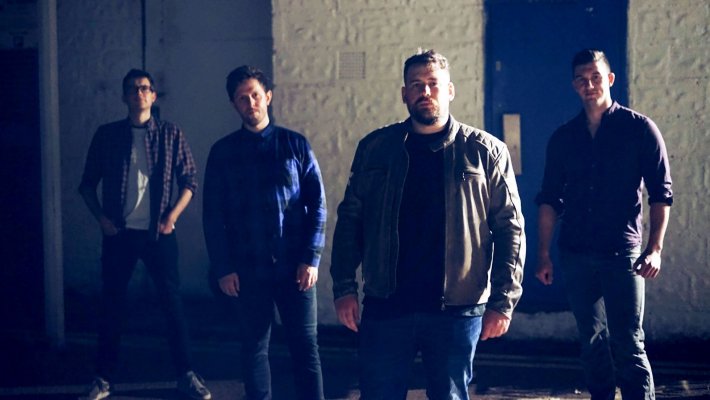 After establishing themselves with a string of bold and intense offerings over the last few months, Hertfordshire's The Late Aprils are back once again to blow us away with their anthemic new single 'Clouds'.

Matching the same pace and energy as bands such as Lower Than Atlantis and Biffy Clyro, 'Clouds' makes for a powerful listen from start to finish. Cementing their knack for killer riffs and pulsing atmosphere, these guys are set to become one of the most talked about names emerging on the alt-rock circuit right now.

So with the new single out now, we sat them down to discuss their origins and what has inspired them most over the years.

What was the first instrument each of you fell in love with?

Mike (Vocals): I've always been obsessed with drums, which is partly the reason why I don't actually play any instruments! I wanted to learn drums as a kid but there wasn't anywhere in the house they could go, so I think my parents just pacified me by saying they'd make some space above the garage. I held out on learning anything else as I was convinced I would eventually get my drum kit but it never happened.

Greg (Guitar): My sister’s Casio keyboard – it had built in songs and beats and even though I couldn’t play the keyboard at all I used to do performances in my own bedroom bashing the keys…not much has changed really.

Louee (Bass): It was definitely the electric guitar. The trouble was, half the guys in my school year played guitar and I knew I wanted to be in a band. So at 13, I made a calculated choice and started learning bass.

George (drums): The drums, naturally! From as early as I can remember I was pretending everyday objects were snares and cymbals. I started drumming properly at 10, which was probably just a way for my parents to get me to stop tapping on the table.

What kind of music did each of you listen to when you were younger?

Mike: I remember as a kid I was obsessed with Achy Breaky Heart, I used to listen to it on repeat back when you had to sit there and manually rewind the tape! In my teens I was obsessed with Muse, Slipknot, Korn etc., essentially if it was on Kerrang I would listen to it. My tastes broadened as I got older but rock bands like Arctic Monkeys and The White Stripes still dominated my playlists.

Greg: The music in our house was always some form of melodic rock or pop with big choruses – Whitney Houston, The Eagles, Alanis Morissette, Oasis, Del Amitri. When I got into my own tastes like punk / hardcore / indie rock I always gravitated to the bands in those genres who still had massive singalong choruses and great harmonies. It’s a huge influence on me – I’m basically trying to blend Whitney and Rage Against The Machine in every song I write now.

Louee: A complete mix of stuff, but generally all pretty high-energy. Sum 41, Rage Against The Machine, Bloc Party, The Prodigy, Nelly, plus plenty of EDM.

George: I was (and still am) a bit of a pop punk fan so anything like Blink 182 or Green Day I was all over.

What was the first album each of you remember owning?

Mike: It was either Linkin Park - Hybrid Theory or Limp Bizkit - Chocolate Starfish and the Hotdog Flavored Water. I got the Linkin Park album just because everyone seemed to be getting it. I was so clueless about Linkin Park's sound that initially I thought I'd got a dodgy CD that was skipping. Those two albums changed the course of my musical interests and really brought me into the world of rock.

Greg: Oasis – Be Here Now. Played it on loop all summer and still love it now. Not because it’s their best album but it was a big discovery of my own tastes and the first album I could play guitar to.

Louee: By The Way by the Red Hot Chili Peppers. There’s a song on that album called Throw Away Your Television that pretty much made my mind up about becoming a bassist.

George: Take off Your Pants and Jacket by Blink 182 rings a bell. The drums on some of these tracks (actually all) really provided major influences for my own drumming and I still regularly play them!

What is the one song you wished you‘d all written yourself?

Greg: Muse – Plug In Baby. Blew my socks off as a kid and never lose it’s bang. Absolutely epic tune.

Mike: I'd have to agree with Greg; Plug in Baby is such an epic song, either that or New Born. The vocals on those songs still blows my mind today and the riffs live rent free in my head.

Louee: One Nation Army by The White Stripes. I’m sure I’d get bored of playing it eventually, but how cool to write a tune that every crowd on the planet can thunderously chant along to.

George: For me something like Always by Blink. The drums have stuck with me since I first heard it and they are just so typical Travis Barker - creative and explosive. Love it.

Mike: Not really no, when I'm writing lyrics though I get pretty wrapped up in it and can't stop till I've finished them.

Greg: Every song I write needs to make me want to sign along, so I really focus on the chord progressions and vocal lines before even thinking about lyrics. So pretty much all of our songs have a demo version on my iphone where I’m singing the melody in gibberish. Maybe one day we’ll release those as b-sides.

Louee: Bass riffs, including the one for Clouds, usually just pop into my head when I’m brushing my teeth or something. I’ll then have to quickly grab my phone to record myself humming it (these voice notes are pretty embarrassing and will never be shared), before I work out how to actually play it.

George: I usually get sent a guitar or bass track and then start putting the drums down to it. I just like to listen a few times away from the kit, tap out a few ideas (on the table!) and then leave it for a day or so to see if I get some different inspiration before one of the ideas starts to stick. Then I’ll head to the kit and start recording a few of my favourites.

Mike: I've actually been revisiting the old Offspring and Green Day albums I used to listen to as a kid, interspersed with Des Rocks and Nova Twins.

Greg: I’m a huge fan of Boston Manor and love how they’ve broken out of the mould from their first album onwards, and their narratives about society. Also, Badflower’s ‘Ok I’m Sick’ album has to be one of the best pop rock albums of the past 10 years, I’ve had that on heavy rotation over the past year.

George: The guys will give me stick for this but I’ve been listening a lot to the sound track of In The Heights by Lin Manuel Miranda. The music is really interesting, a mix of latin and hip hop and which makes for some great percussion sections.

Mike: This is such a difficult question, I would love to open for a band doing a homecoming gig as they have a vibe to them that you don't get anywhere else. Something like Arctic Monkeys in Sheffield or Royal Blood in Brighton would be the dream.

Louee: AC/DC, specifically in Argentina. I’ve seen a video of one of their shows there and the crowd looks nuts.

George: The answer must be obvious by now… Blink 182 of course!

Greg: Playing live and people getting into what you’ve spent hours trying to create – like you’ve built a connection with them and you can see you’ve made them want to scream, dance, or sing along, that’s the best bit.

Louee: Absolutely being on stage. I feel like the best experiences in life are usually quite scary, and gigging is one of them. Luckily, we’ve got a few big ones coming up.

George: Definitely the live performances. The feeling after finishing a set and walking off stage is one of a kind.

Greg: Honestly, anything that isn’t practicing, writing, recording or gigging – I think we’d all love to have an army of slaves doing the rest for us to let us concentrate 100% on the music.

Mike: Yeah, anything that isn't the music, I would love to just ignore it all but it's not really an option.

George: The social media side but to be fair as a group we are pretty slick at that / Louee and Mike do it all.

Mike: Our lass always tells me to make sure I show that I'm enjoying myself, when you're having a great time it makes other people want to join in and I think helps build up that energy.

Greg: Tom Morello once said that if you can write a riff on a cheap acoustic guitar that rocks hard, then you’ve written a great riff – that’s stuck with me and I try to use that every time when I’m writing something I want to rock hard.

George: Remember, it is meant to be fun!

The Late Aprils' new single 'Clouds' is available to stream now. Check it out in the player below.

14 hours 21 sec ago Following up the release of her brilliant 2019 LP 'III', BANKS has now returned to share a brand

14 hours 50 min ago After cracking out a string of impressive offerings over the last few months, emerging US outfit