Their new single 'Lazy Raver' is out now 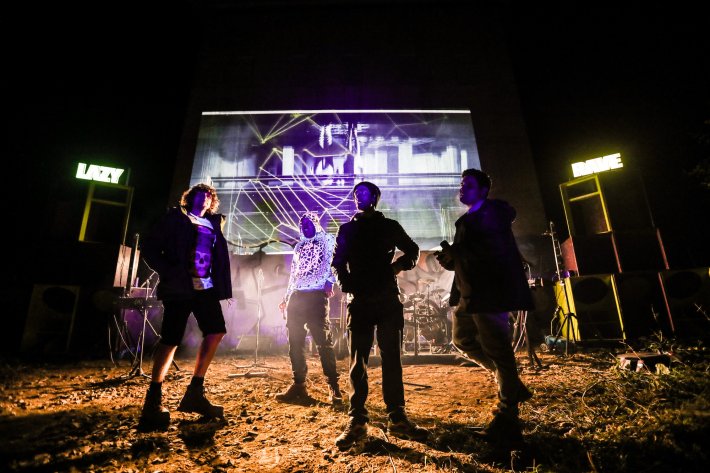 After finding enormous success with their previously shared efforts, landing them slots on both BBC Introducing and BBC 6Music, Newcastle-based outfit LAZYRAVE have now returned to deliver their new single 'Lazy Raver'.

Continuing their fresh and vibrant alt-electro direction, 'Lazy Raver' makes for an extremely bold and enticing listen. Marrying the conventional aesthetics of psychedelic trance and a distinctly Britpop-inspired focus, these guys have a sound like no-one else.

Mark: For me it was the sound of the old school synthesisers mainly the Minimoog and the early Junos.

Pete: Peter Frampton whipping out his talkbox on "Do You Feel Like We Do".

Ben: I instantly fell in love with the drums when I figured out drum lessons would mean time away from maths and English class at school; that’s why I’m shite at Maths and English and areet on the pots ‘n pans.

Dan: The main riff on ‘firestarter’ couldn’t even tell at the time if it was a guitar or what i just knew i fucking loved it. Later found out it was a Korg Prophecy with a ton of effects on.

Mark: I used to listen to everything but had a passion for electronic music, my only exposure at that time was Judge Jules and Pete Tong on Radio1. I had a good few compilation CDs and some vinyl and used to go to the odd under 18s event.

Pete: Metal. It’s a rite of passage where I grew up. You must choose Metallica or AC/DC within minutes of birth. I chose the former.

Dan: I used to love a bit of hip hop/rap when I was a nipper. Tupac, Snoop, Dre. Nas etc.

Mark: To be honest I can’t remember, I remember my favourites around then being Prodigy – Fat of the land and the first Clubbers Guide to Ibiza from Ministry of Sound, looking back it had some cracking tracks on!

Pete: I checked in my old man’s petrol points for a Eurythmics album. The love affair with synths began.

Dan: i’ve got a feeling it was ‘The Score’ by The Fugees.

Mark: Nothing springs to mind, I do admire artists that can transport you to another place or take you on a journey with their music.

Ben: Don’t Look Back In Anger, you’d be laughing all the way to the bank, and the pyramid stage.

Pete: Not a song, but so much inspiration comes from Tool. No other band can get you talking about fibonacci, time signatures and DMT within the first sentence.

Mark: For me it’s all about finding inspiration, be that from a place I’ve visited, a thing that I’ve done or even something as simple as a new sound on a synth.

Dan: Getting inspired before attempting it is always a good idea. Not really a ritual but I seem to work better late at night when everyone else is a’kip. Maybe it's knowing there’s no distractions at that time and I can get in the zone better or something.

Mark: I’m a crate digger and a DJ, so I don’t listen to many artists on repeat and my favourites change from week to week. At the moment I’m into Overmono, DJ Seinfeld, Maribou State, Shire T, Bicep, Redlight, Mall Grab, Wayward, to name a few.

Mark: Sharing the joy with others, those special yes! moments when you get to the sweet spot.

Ben: Sometimes a band can hit a thing of, I’m gonna call it zone, there’s just this moment where all instruments are connected in the present and there’s this unexplainable energy that must tap into the field of infinite voodoo knowledge or something. All that’s canny cool and going on tour, being able to visit new parts of the world and play gigs at the same time, that’s mint!

Dan: Finishing a tune you’ve been working on, then playing it live.

Mark: Answering ques… just kidding, hopefully the frustrating part is behind us. Not having an outlet, no live events because of COVID you know that sort of stuff. Everything else is enjoyable to some degree.

Ben: It could be looking back at time wasted, handing out endless amounts of CDs and mem sticks: here’s a tip, nobody who's a somebody listens to unsolicited music. Wouldn’t change it for the world though, mint hustle. One time we snuck into a festival on the Quayside, my mate Will drove his speed boat along theTyne up to the backstage area, gave a mem stick to Sub Focus - proper 007 shit that.

Dan: Finishing a mix, rendering it thinking it's finally finished, then sticking it on in the car and realising it's definitely not finished. Also the beach ball of death is a right little mug.

Mark: Never give up on your dreams, learn to know when a track is finished, believe in yourself and your talents and the old less is more, it really is! Make fewer parts that pull their weight.

Pete: All the gear with nee idea. Don't be that guy.

Dan: Don’t be cheeky to the sound man.

Ben: It's not what you play, it’s what you don’t play. (There’s lots of stuff I can’t play, so that’s served me well over the years).

LAZYRAVE's new single 'Lazy Raver' is available to stream now. Check out the new video for it in the player below.

2 days 47 min ago After delivering their outstanding studio album 'SHYGA!

2 days 41 min ago After impressing so many with her brilliant singles ‘Frank’ and ’Stripes’ last year, fast-rising