Getting To Know... Letting Up Despite Great Faults

Getting To Know... Letting Up Despite Great Faults

Their new single 'Gemini' is out now 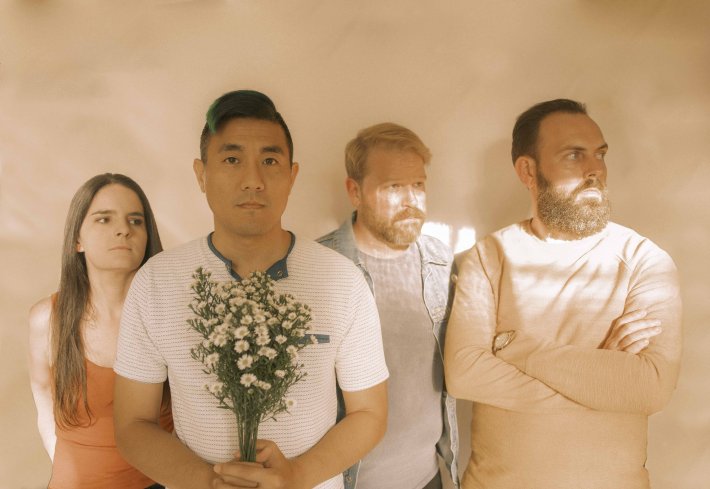 After unveiling a warm and inviting collection of offerings these last few years, Austin-based outfit Letting Up Despite Great Faults have now returned to deliver their next captivating cut 'Gemini'.

Lifted from their forthcoming new album, which is set to arrive early next year, 'Gemini' sees the group unveil one of their most atmospheric releases to date. Filled with bold and soaring textures, mesmerising aesthetics, and some wonderfully shimmering hooks throughout, it feels like things are really moving forward for them right now.

So with the new single out now, we sat down with Mike from the band to find out more about his origins and what has inspired him over the years.

Guitar. I played piano, flute, and trumpet before that. 90s grunge rock just didn’t sound as good on a trumpet.

My older brother was always listening to The Cure, Joy Division, and The Smiths so I was very lucky to have that influence. But I also dug myself deep in 90s R&B with Bobby Brown and Janet Jackson. My first song I learned on guitar by myself was probably Metallica’s “Enter Sandman” (or maybe “One”), so I definitely always loved jumping around when listening to music.

It might have been Nevermind or Pearl Jam’s Ten. But also maybe Bell Biv Devoe’s Poison. Whatever it was, it was definitely in one of those CD longform boxes.

There are hundreds, but most recently I wish I wrote Claud/Shelly’s “Falling with the Rain.” Everytime I listen to it I feel like it’s giving me a big hug.

Oh man, so way back in the day I would always do a midnight Del Taco run and get the same meal and write until like 3-4am. It’s funny because I would never get a soda because I thought “that’s bad for you”....all the while eating DEL TACO. Anyway, for this album, I’m writing as early as 7:30am now so it’s all flipped, aka drinking lots of coffee. I love going to my local coffee shop Dear Diary to write if I get bored at home. But if anything, I try to break any habits I find myself doing. As much as I hate to think it, the way I write is somewhat formulaic so I’m always trying to do something to mess with that.

Just discovered two bands I’m loving today: Cindy and Westkust. I love FRITZ, Peel Dream Magazine, Bored at My Grandma's House. But the top of the list has to be Coco, and maybe because we know absolutely nothing about them. Who are they and why are they so good??

Obviously Ariana Grande - can you imagine what kind of rider you could have?

The feeling and adventure of writing songs you get to craft all by yourself from thin air, as well as performing in front of people who enjoy what you do and spend their hard earned money and time with you... are experiences truly indescribable. It has enriched me as a person and gives me a drive and meaning to my life I otherwise would feel so lost without. I’m beyond grateful.

Figuring out how to inform the people of your work who genuinely would like to know. There are so many artists who craft these amazing songs and albums that will only be heard by a small few. Even when we send to our mailing list, I know it ends up in a lot of junk folders...and these are people who actively signed up for our list. We love connecting with fans, so we try to be active on all platforms. Hopefully, that makes some difference.

Honestly, I would have loved it if someone told me these two things:
1. Work hard but never think of it as work. If it feels like work, then maybe this is just a hobby to you (which is TOTALLY fine!).
2. Be willing to spend money on your craft, be it on gear or marketing or extra studio time. If you aren’t willing to invest in yourself and your own songs, why would anyone else? Max your credit card, eat instant noodles for a few months, you have to ask yourself how badly you want it. Almost always, you will never get what you don’t put in. Shoot your shot!

Letting Up Despite Great Faults' new single 'Gemini' is available to stream now. Check it out in the player below.

6 hours 58 min ago With his highly-anticipated new album dropping early next year, Miles Kane has now unveiled the n

6 hours 51 min ago Just when you think the indie-rock scene has reached peak saturation, an artist comes along and f