Getting To Know... Little Fuss

Getting To Know... Little Fuss

Their debut EP 'Hazy' is out now 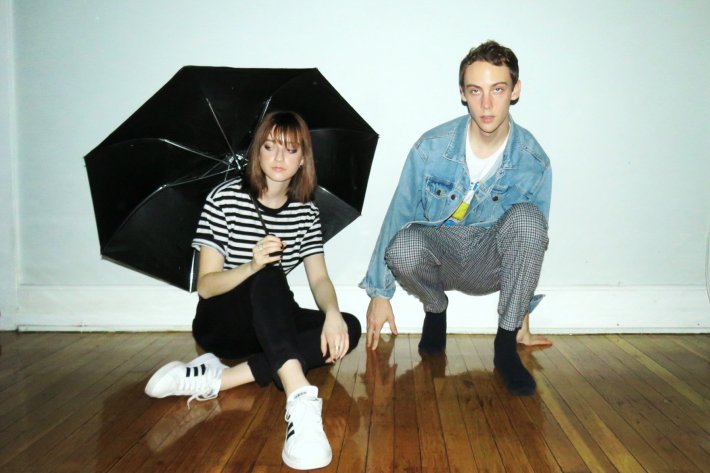 Featuring the previously shared singles 'Watch Out', 'Human Of The Century' and 'Too Close For Comfort', 'Hazy' makes for a wonderfully bold and adventurous listen. Channelling the same dynamic alt-pop direction that so many have explored in recent years, the new four-track collection shows that they are very much an act worth keeping an eye on.

Olivia: I fell in serious love with the harp as a kid. I never learned how to play it because I had no idea where one would even find a harp to play in Ohio, but I definitely thought it was the most beautiful sound in the universe for a while. I kind of always sang (secretly) and started playing guitar at 13.

Cody: I first picked up a bass guitar when I was 7, and I guess that’s always been my go-to instrument when performing live. I’ve always secretly wanted to be a guitarist, though. When I listen to music, I want to hear big fuzzy riffs and interesting guitar tones--I always have a guitar in my hand when I’m arranging or writing.

Olivia: I did ballet, so when my grandma got me an alarm clock radio I would listen to the classical station for hours on end, dancing along like an idiot in my room.

Cody: I grew up on a steady diet of The Strokes and Innerspeaker era Tame Impala.

Olivia: My mom gifted me Harry Nilsson’s “Land of the Point,” on vinyl, for which I’ll be eternally grateful.

Cody: The first album I ever remember buying was Infinity on High - Fall Out Boy. I relistened to it recently actually and it was a hell of a nostalgia trip!

Olivia: I wish I wrote “Your Song” by Elton John. It kind of explains why people write songs for other people in the lyrics themselves, which I love.

Cody: Vertigo by Mini Mansions blows my mind everytime I hear it. Every moment of that song is so interesting. They nailed the production!

Cody: We like to keep things fresh. I feel like we make an active effort to not fall into any habits when writing. Every song starts from a different place than the last, which forces us to be creative and eliminates the conveyor belt attitude that a lot of artists fall into.

Olivia: I keep a lot of disorganized journals.

Olivia: I recently became a big Grimes fan! Her melodies really interest me and I find it super motivating that she does everything herself, including visual art, etc. Her first album also made me want to read Dune, which is really good so far.

Cody: An artist I’ve been loving recently is Fable! There’s absolutely no reason that she won’t blow up in the near future. I’ve also been listening to this fun Norwegian artist named Beharie. I love his music, it’s soulful without making a novelty out of it. Can’t recommend it enough!

Olivia: My friend just showed me a video of Dan Deacon’s live show and the audience participation was on another level. It would honestly be an honor to perform for that crowd.

Olivia: Those rare moments when everything feels inspiring.

Cody: The community and people you meet! Pretty much all of the relationships in my life are due to music in one way or another. I also think the nature of being in a band and how it unites people in pursuit of a common goal is one of the greatest feelings in the world.

Cody: Grappling with a constantly messed up sleep schedule.

Olivia: The vlogbrothers weren’t specifically talking about music when they said “Don’t forget to be awesome,” but I still think it applies - just be yourself.

Cody: My friend told me a couple months ago that the goal of playing music isn’t to “make it”, but rather to integrate it into the life that you already lead. It really changed my entire mindset. Being in a band is probably one of the most volatile environments to exist in. Some days the stuff you’re writing might not work, and you need a healthy amount of stability to balance out the lows--whether it be a part-time job, a hobby you take pride in, or even just a solid friend group to lean on. I’ve had previous bands fail partly because we weren’t willing to compromise not wanting to live a conventional lifestyle, but I think you need those experiences to stay grounded as a creative person.

Little Fuss' new EP 'Hazy' is available to stream now. Check it out in full via the player below.

11 hours 46 min ago With their eagerly-awaited new album landing in the coming months, Superorganism have now dropped

14 hours 51 min ago With a bold and blistering array of gems under his belt already, including the breakthrough anthe