Their new single 'Slaughterhouse' is out now 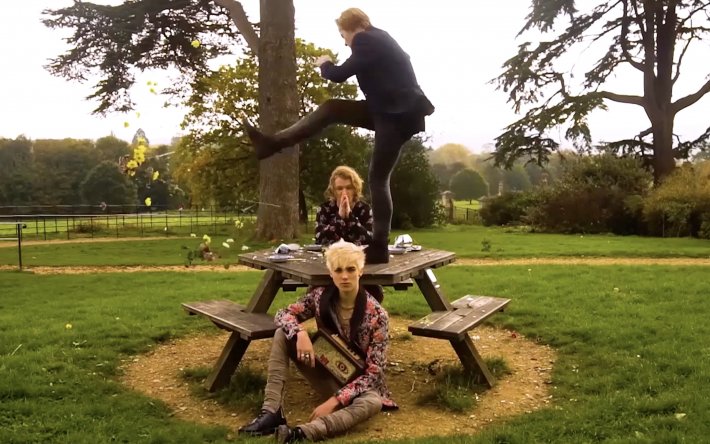 Channelling a raw and frenzied aesthetic throughout, 'Slaughterhouse' sees them return with one of their most energetic offerings to date. Jam-packed with enormous riffs, killer hooks, and an insatiable pace throughout, be prepared for this one to blow your socks off from start to finish.

So with the new single available now, we sat down with them to find out more about their origins and what has inspired them over the years.

Ezra - I got given a ukulele when I was 2, I’d slap the strings and scream at the top of my lungs until the windows broke.

Lewis - Bass guitar because I used to watch this YouTube band called your favourite Martian and the lil blonde dude played it.

Rob - First instrument I fell in love with was drums, I remember always paying attention to the drums and always having certain drum grooves stuck in my head from when I was about 6.

Ezra - I started as a kid loving bands like the Chilli peppers , System of a down and Metallica, by the time I was a teenager I’d found a song in basically every genre that I was in love with.

Lewis - The first music I got into on my own was dubstep and then when I was about 12/13 I discovered nirvana and everything changed. I got into Nirvana, a few shitty emo bands and got into blink 182 and sum41 and loads of “kerrang music” then more into bands like system of a down and way more into rap.

Rob - I fell in love with Blink 182 whenI was in secondary school and listened to nothing but Blink until I got to 18 and lost my interest in anything pop punk related and started listening to heavier stuff like hardcore, metal core etc.

Ezra - When I was 6 Santa put Toxicity by system of a down in my stocking, Changed my fuckin life. The first album I bought myself was Nirvana Mtv Unplugged.

Lewis - My mum used to buy me the Now albums and I also stole my parents copy of “the Eminem show” but the first album I bought on my own was nirvanas MTV unplugged on vinyl.

Rob -Nickelback all the right reasons, I was 11 at the time.

Ezra - I wish I’d written Under the Bridge by RHCP, or Otherside. Hard choice.

Lewis - There’s so many songs I wish I’d written but off the top of my head I’d say Washer by Slint and said the people by Dinosaur Junior.

Rob - Sympathy by Alicks, I really like the production and the vibe the track has.

Ezra - My usual ritual for writing a song is very much unplanned. Half the time I’ll be found sat at the back of a bus humming melodies into my iPhone voice recorder, the other half of the time I’ll be sat naked on the carpet with my guitar at 4am.

Ezra - I’ve been listening to a whole lot of Loathe at the moment, Myth city and slowthai are also in common rotation too.

Ezra - Jimi Hendrix dude, or nirvana so I can stroke Dave’s beard.

Lewis - If it was possible It would be nirvana in some grotty lil venue simply because of the raw energy and hanging out with Dave Grohl would be fucking sick.

Ezra - Feeling the whole room swarm with the same energy at a show is the most beautiful feeling on earth. Knowing that your art and Entertainment is truly meaningful to someone else is really special. And the adrenaline rush after a show is better than any drug.

Lewis - Seeing people actually enjoy the shows you put on is the best feeling ever. Honestly being a small band, releasing music isn’t too rewarding most of the time but when you see people pitting and singing back to one of your songs with barely any listens on Spotify it’s pretty special.

Rob - The most rewarding part is releasing music, you’re showing the world what you do, what you create as a band / artist when people come back to saying they fuck with it, it means the world.

Ezra - When your strings break in the first song at a gig.

Lewis - The most frustrating part is definitely not getting the listens and attention you were hoping for but it’s just a bigger motivation to get even better and more entertaining.

Rob - Getting bored of a track because you’ve practiced this track for so long, perfecting every part I find very irritating, it makes you start to doubt the track although you know it’s good and you can feel that you’ve wasted time on a track you don’t like.

Ezra - Play with as many different people as you can, there’s always room for musicians to learn from each other and you can end up taking inspiration and lessons from the most unlikely of people.

Lewis - I’m not really sure what advice I’ve been given apart from don’t give up and keep practicing but id honestly say the best advice I could give would be to just have fun at gigs and be sound with everyone. No one likes to watch a band look like they hate being on stage and no one likes arrogant people so just have fun and be cool.

Rob - Don’t be the dick band who won’t talk to another band and shits on any band they can, nobody likes that and no matter how much of a good band you are, you’ll get nowhere.

Lykos' new single 'Slaughterhouse' is available to stream and download now. Check out the new video for it in the player below.

2 days 1 hour ago After reviving the moniker near the end of last year, Nick Murphy has now announced a brand new a

2 days 1 hour ago After impressing so many with her brilliant debut EP 'Talk' earlier this year, fast-rising 17-yea