Getting To Know... Moon Walker

Getting To Know... Moon Walker 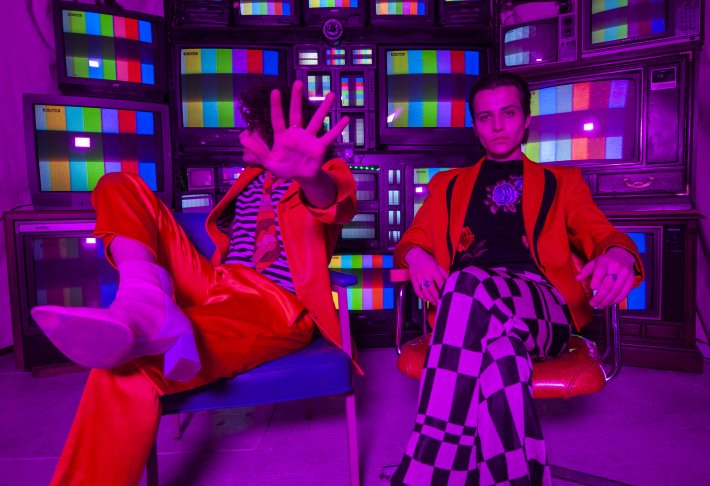 After the enormous success behind their recently released debut single 'Tear Down The Wall', LA-based duo Moon Walker have now returned to unveil their next impressive delight 'The TV Made Me Do It'.

Channelling a smooth and enticing array of psych-rock and indie-pop aesthetics, 'The TV Made Me Do It' makes for a fun and vibrant return. Jam-packed with smooth rhythms, funk-filled grooves, and killer hooks throughout, we can't wait to hear where this sound takes them in the months ahead.

Harry: For me it was guitar. I started when I was 10 and the rest is history.

Sean: The first instrument I fell in love with was the drums!

Harry: When I was really young, it was whatever was on MTV. But what really got me genuinely interested in playing music was the Beatles Love show in Las Vegas. I became obsessed with classic rock in general, but particularly the Beatles.

Sean: Growing up I listened to primarily the music my mom and brother showed me which was mainly like new wave/ glam and emo alternative. I loved a lot of Queen, Styx, Depeche Mode, The Doors, The All American Rejects, and Panic! At the Disco.

Harry: Good question… I remember bothering my parents to buy me a Beatles box set which had CD’s of all their albums when I was young… not sure if it was the first but it was one of the earliest times I was enamoured with the physical packaging of music.

Sean: The first album I remember owning was either The Doors greatest hits or Move Along by the All American Rejects.

Harry: The ultimate unanswerable question…. I’ll narrow it down to either Dandy In The Underworld by T Rex, Life During Wartime by Talking Heads, or Tales Of Endurance by Supergrass. But I’ve ripped off all three so many times that it’s almost as though I did write them haha!!

Sean: I wish I could’ve written Bowie’s “Life On Mars”.

Harry: Every song comes about differently but I’m constantly writing, so at this point, all of my rituals and habits in a day are conducive to me writing. I find that having movies on while I’m writing can be very inspiring though. As I’ve gotten older, it probably inspires me more than other music.

Sean: When making music, I usually just try to let the music take me where it wants to go so I guess I don’t really have rituals or habits except just choosing which instrument to start on and seeing where it goes.

Harry: Recently I’ve been really into the new Tyler, The Creator album. I’ve also been listening to Year Zero by Nine Inch Nails a bunch. Måneskin, The Living Strange both kick ass as well. But if I’m being honest, I’ve probably listened to Inside by Bo Burnham the most haha.

Sean: My favorite artists I’ve been listening to at the moment are Sons of Kemet, St Vincent, Sunglasses for Jaws, U.S. Girls and Bowie (who is always in there)!

Sean: I’d love to open for David Byrne, Queen, Roger Waters, or Paul McCartney. It’s honestly hard to decide one, but it would have to be one of the greats that are still with us.

Harry: Being happy with a song you’ve created. No doubt. It’s also amazing when people like it, or to share that moment with them in a live setting, but for me there is absolutely nothing like hearing a song back and feeling like I put everything I had into it.

Sean: The most rewarding part of being a musician is seeing an idea come to fruition and getting to just wholeheartedly be yourself in the moment while making it. Then the fact that the music can possibly move whoever is listening to it is the icing on the cake.

Sean: The most frustrating part is probably the fact that something as wonderful as making music hardly pays the bills.

Harry: I have no idea who gave it to me but at some point, someone told me that a producer’s only job is to serve what that particular song needs. That helped me universally because it’s so easy to get wrapped up in comparing it to other songs, agonizing over how it fits in a record, overthinking it, etc. while making music and it’s really important to remember that all that matters is what’s right for the song you’re making. Even if you want to make a really cohesive record/discography, you still need to take it one song at a time.

Sean: The best piece of advice I’ve received as a musician is that every idea is a good idea and it’s more about being yourself and being excited about what you’re making than whether or not something is “good”. “Good” is subjective.

Moon Walker's new single 'The TV Made Me Do It' is available to stream now. Check out the new video for it in the player below.

8 hours 15 min ago With his highly-anticipated new album dropping early next year, Miles Kane has now unveiled the n

8 hours 8 min ago Just when you think the indie-rock scene has reached peak saturation, an artist comes along and f