Her new single 'Hey It's Me' is out now 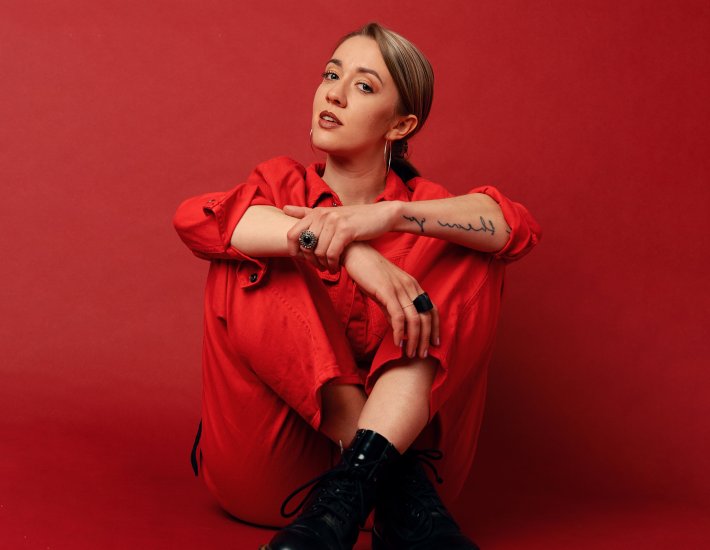 After establishing herself with some brilliantly bold and inventive cuts these last few months, Austrian artist Nnoa has now returned with her bouncing new effort 'Hey It's Me'.

Continuing her fresh and exciting adventure through the world of bass-driven alt-pop, 'Hey It's Me' sees her follow in the footsteps of Jessie Ware with its vibrant sound. Filled with sensual tones, enticing production, and her own powerful voice at the helm, it certainly feels like she is onto something very special with this new one.

From an early age on I was absolutely fascinated by the diversity of sounds a voice can produce. I’ve always had quite a wide vocal range. I‘m talking about that cute baby voice when you want something from your parents or that beast-mode voice when you want to annoy your older brothers (sorry guys!) I really used to love singing at the top of my lungs in my parents’ staircase, where the natural reverb gave me some Whitney Houston-vibes every single time (again: sorry guys!)

I remember when I was 13-years old and I really wanted to be "cool“ and surprise my brothers with a "proper“ gift for Christmas. They both love music, so I went to the local music store with 15 bucks, but to be honest I had no idea what kind of artists they liked. I was so lost. So was the shop assistant, who realized that this blonde girl had little money and pretty much no idea what she‘s here for. So I made a random choice and picked that red-covered album that looked quite cool to me. I didn‘t even listen to it in the shop, because I felt so uncomfortable. However, I really needed a present quickly since it was the 24th of December (rocking that last-minute game since 1993). At home, it turned out to be the album of a very famous german hiphop-dancehall group who still make absolutely dope music. My brothers were quite surprised about my choice & I was the happiest kid on earth dancing to this music. For the next few weeks there was no other band on our radio than SEEED and I still love them. Check them out!

As I was the only one listening to that album mentioned above all day long - and at some point it didn‘t feel like my brothers‘ album anymore, but mine - I‘d say it was SEEED - Next!

Can‘t make you love me - Bonnie Raitt. I discovered this song when Bon Iver covered it and especially his version makes me feel sooo many things at the same time - again and again. It‘s insane how emotionally intense songs can be.

I’m not really a ritual kinda person. I’ve realized that I prefer diversity to keep my creative spirit going. Sometimes I start with jamming chords on the piano & mumble words in a fantasy language until I get a feeling of what lyrical mood the chords need. When there are no instruments around, I record melodies and words with my phone or write them down in my sketchbook. So whenever I do not feel inspired, I love to have a look into my `holy bible‘ or listen to the billions of voice memos I carry around with me the whole day.

Billie Eilish. Firstly, because she’s such a cool human being & I’d love to make weird jokes with her backstage. I absolutely love her music, especially those little twists and turns in her lyrics. Secondly, because I‘d love to experience standing in front of such a BIG crowd. Honestly, it’s one of my biggest dreams - I could die in peace then.

That your songs may become the perfect partner for your listeners, no matter in what situation. There‘s no bigger compliment than "I felt heard & understood!“ or "That song got me through intense times.“ It‘s such a great honour that people let your music get straight to their heart even if they don‘t know you in person.

It has become quite a common thing in life to be surrounded by music, always. Everybody loves & needs music. However, the music industry nowadays is quite draining, especially for new and independent artists. You are expected to release new stuff every month, or even better every week. These are not necessarily your listener’s expectations, but those set by soulless algorithms. If you can‘t follow their rules, they‘ll leave you hanging and your songs won‘t ever get the attention they deserve. In this industry, we are rocking the game of superficiality, but hardly anyone sees how many stages you & your songs have to go through until people can press the play button in their preferred streaming platform. Instead, this industry keeps on pushing the fast-forward button, while artists put all their heart (and money) into their melodies and words to create something very special that enriches this planet. That can be quite frustrating.

I hosted a masterclass with the Irish singer & songwriter Wallis Bird a few months ago. She reminded us to save some energy for ourselves while going through the creative process. No matter if you put all your heart into your live performances or into creating new music. You should always save at least 10-30% of your energy for yourself. Otherwise, you won’t have the power to keep this whole thing moving in the long run! I really loved that & tried to remember her words whenever I felt down.

Nnoa's new single 'Hey It's Me' is available to stream now. Check it out in the player below.