Their debut single 'Time Travel' is out now 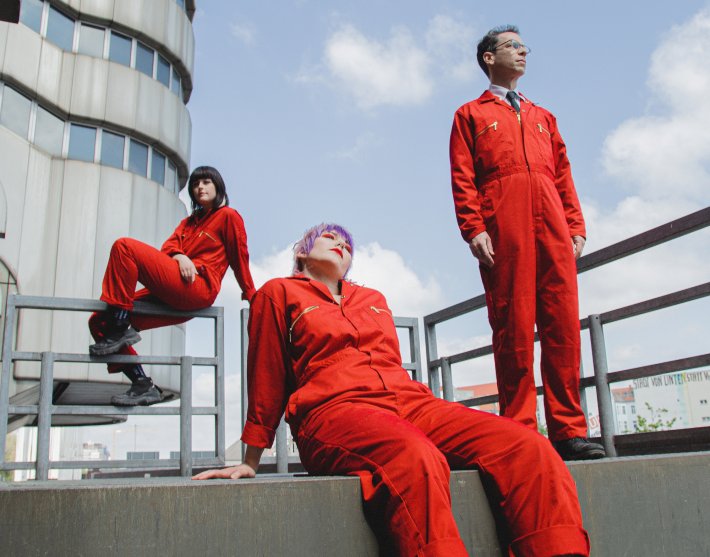 After spending the last few months building and developing their sound, Berlin-based outfit Partefacts have now introduced themselves with their vibrant debut single 'Time Travel'.

Lifted from their forthcoming new EP 'Lifestyle Blob', which is expected to arrive in the near future, 'Time Travel' makes for a wonderfully fun and catchy introduction to their sound. With its bouncing basslines, upbeat tones, and killer hooks layered throughout, these guys are certainly worth keeping an eye on for the future.

So with the new single available now, we sat down with them to find out more about their origins and what has been inspiring them most over the years.

Lani: The flute was the first instrument I really connected with as a kid, which then led to clarinet and bass clarinet. Then I switched to guitars and then synths and left woodwinds behind completely. But in the past couple of years I’ve picked up a flute at a flea market and drunk-bought a sax off the internet and now I’m absolutely loving playing wind instruments again. I’ve come full circle!

Craig: I never learned to play any instruments, so I think I have to say ‘the tape recorder’. I found one in my parents’ garage, an old reel-to-reel machine from the seventies. I’d read about artists like Brian Eno and Laurie Anderson and Cabaret Voltaire using them to make music, so I just started messing around, making loops, slowing things down and speeding them up, running things backwards, scratching with the pause button. I couldn’t believe how great it sounded, and how easy it was. And like Lani with her flute, it’s come back around - we use quite a lot of tape manipulation sounds and tape loops in Partefacts. You can hear it in Time Travel, actually, in that treatment of Christa’s voice at the end of the song. The pause button!

Christa: The Fender Strat my Grandma bought me for Christmas after I’d been air-guitaring pop-punk in her bathroom mirror for months.

Craig: Weird pop music - the same as now, really. The B-52’s, Pet Shop Boys, The Bangles, The Cure, INXS, Supertramp, Peter Gabriel, Kate Bush. These were all artists I liked as a kid. And they all affected me in a similar way, in that I remember being almost frightened the first time I heard them. I remember hearing ‘Running Up That Hill’ on the radio, standing there staring at the speaker while the song was playing, not sure if I wanted to turn it up louder or throw a blanket over the radio and run away. A little later, I started getting interested in music history, reading a lot of books, buying records at flea markets and junk shops, discovering disco, post-punk, and those things in between that are a big influence on Partefacts’ sound - Was (not Was), Tom Tom Club, A Certain Ratio, Delta 5, Scritti Politti, and all that.

Lani: I went through a lot of extremely rigid and exclusive phases – like only punk! Only electronic! Only indie rock! Only trip hop!

Christa: There’s a Vancouver radio station called The Beat 94.5 that I listened to every morning before school... my favourite radio personality, DJ Flipout, had a morning show called the Traffic Jam where he’d mix modern pop with r&b classics. When I started going out of my way to find albums and bands, it was mostly pop punk and goth. I was also deep into classical piano studies, so there was a lot of recital music in my life.

Lani: Not sure about the first album, but I remember having a TLC cassingle with Waterfalls on one side and Diggin’ On You on the other. I stand by that purchase.

Christa: Akimbo Alogo by Kim Mitchell (a Canadiana classic) — bought it on cassette at a flea market because I thought he looked cool.

Craig: ‘Wipe That Sound’ by Mouse on Mars. The most sprawling chaotic weirdness wrapped up in the tightest glitchy funk groove. How in the world did they do it?

Christa: I Surrender by Suicide.

Lani: If I’m feeling stuck for lyrical ideas I like to open a book at random, point my finger and start with the word I see. Or for a longer version of that, cutting up a photocopy of a book and seeing what new ideas come out. It’s a nice way to escape the topics I naturally reach for and the vocabulary I usually use. As a band, we’ve recently been doing this thing where we’ll go into the studio and pretend to be a band of a totally different genre for the day. Then we’ll set a calendar reminder for three months later. After that time we’ve forgotten what we made and we treat our original creation as a sample.

Craig: In some ways Partefacts is quite free-form, in that everybody plays a little bit of everything, and ideas can come from any direction. But there’s always this basic structure where we start with a simple loop and take turns adding sounds to it. We can go on for quite a long time like that, adding and subtracting things, with me mixing it just enough to sound good in the room, until it sounds like the beginning of a song.

Christa: I listen to a secret Partefacts playlist of our demos all the time, honestly! I can’t wait for more of our music to come out. Otherwise I listen to tons but find myself most excited about Cold Wave, Shoegaze, Krautrock-leaning stuff and modern emo. Black Marble and Deb Never come to mind.

Craig: Hmmmm. I know you probably want to know who we admire here. But to be honest, if I think about us opening up for, say, Stereolab or Soulwax, I feel frightened and small. So I’m not sure!

Christa: I want us to play with Nardwuar’s band The Evaporators!

Craig: The feeling of getting ever-closer to the Sound in my Mind.

Christa: Having a tangible creative output that I can observe and be objective about makes me understand myself better. It also helps me to hear and feel what I’m capable of creatively. There’s so much potential beyond a single song… there’s so much to discover in and around every idea you record.

Lani: In the studio, creating something that I can’t believe came out of my brain and body. It’s the best feeling. And being completely in the moment and lost in the music onstage.

Craig: That the Sound in My Mind is always just out of reach.

Christa: The need for consistency to get better.

Lani: That being a beginner is a feeling to reach for, not something to be ashamed of. When you pick up an instrument you don’t know how to play you’ll come up with different ideas than you will once you’re comfortable with it. Lack of proper technique doesn’t mean you won’t come up with something interesting!

Craig: “Be just. And if you can’t be just, be arbitrary”. It’s from ‘Naked Lunch’ by William Burroughs, and it’s great advice. When you’re composing or mixing music, you should try to do the right thing - to be just, to do justice to the track, or the idea of the song. But if you can’t figure out what it is at that particular moment, and the options seem confusing, it’s best just to do something, and choose it in the most random or indifferent way you can. It usually works out pretty well, in my experience, and you quickly forget about the other options anyway.

Partefacts' debut single 'Time Travel' is available to stream now. Check out the new video for it in the player below.

11 hours 37 min ago With their eagerly-awaited new album landing in the coming months, Superorganism have now dropped

14 hours 41 min ago With a bold and blistering array of gems under his belt already, including the breakthrough anthe