Getting To Know... Poetica

Getting To Know... Poetica

Her new single 'Thanksgiving' is out now 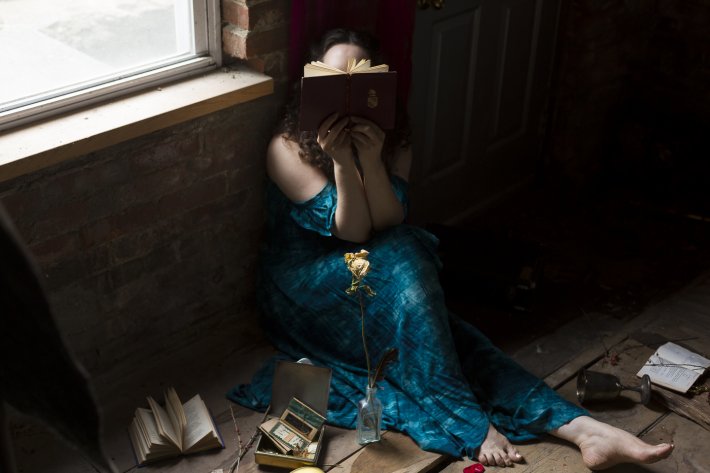 After developing her sound and aesthetic these last few months, composer, producer, and poet Rachel Sage aka Poetica has now delivered her stunning debut effort 'Thanksgiving'.

Working in collaboration with three-time Grammy-nominated cellist Dave Eggar, 'Thanksgiving' makes for a wonderfully captivating introduction to her sound. Blending laid-back soul-infused tones with a distinctive spoken word element, this new release is a warm and inviting offering, brimming with adventurous potential.

The piano! My Mom took me to see "Oklahoma" on Broadway when I was 3 and I came home and played the score by ear with one hand on our living room piano. Needless to say, my distinctly non-musical family was a bit stunned. It was pretty obvious I was already taking my new relationship very seriously though, because they'd have to tear me away from the piano most days thereafter (or my sister would just yell for me to stop playing, when she needed quiet to do her homework!).

I loved any style of music with strong melodies and dynamics, whether it was classical, pop or even music I heard in synagogue. If I could hum it or it stuck in my head and took me on some kind of mental and emotional journey I was in. I loved everything from my Dad's Beatles and Doo Wap collections to my Mom's Billy Joel and Broadway cast recordings. I watched Solid Gold religiously and listen to Top 40 radio every morning getting ready for school, while my sister who was older listened to more rock and alternative (The Cure, The Smiths, Siouxsie & The Banshees) and that sank in too. By the time I was in 7th grade I was really into folky singer-songwriters courtesy of my best friend, who introduced me to Carole King, Cat Stevens, James Taylor, The Doors and King Crimson at one sleep-over. My mind was suitably blown and I still listen to my childhood influences because it was all great music. By the time I got to college my tastes were about as varied as they could be, with everything from Sinéad O'Connor to Elvis Costello to John Lee Hooker, Maria McKee and Tom Waits in my collection.

I'm not sure which it was exactly, but I remember going off to sleep-away camp with cassettes of Billy Joel's Piano Man, Daryl Hall & John Oates, and Elton John's Goodbye Yellow Brick Road. Sadly, no women...I remember being upset my voice would never sound like a man's, at the time, because I had the impression that only men had hits on the radio. Oy!

There are so many, but John Lennon's "Imagine" would be at the very top.

Not really. I also very rarely try to write new music. I find that when I try, it doesn't happen. It's when I remove other pressures from the rest of my life – for however long – that music flows. To that extent, I suppose I write best when I am on email, social media and the computer the least! Living life, being with friends, walking, traveling, seeing movies and reading books...those are experiences that tend to put me in a frame of mind and heart to write, but there really is no formula and never has been, for me. Music is a way of communicating and expressing what I can't say conversationally, so it depended on rituals or habits, I probably wouldn't have ever gotten into it to begin with. It was just another language I found, to navigate life's ups and downs, and that's still what it is for me, generally speaking.

I run a record label - MPress Records - and currently I'm listening to several of my own artists because I'm working with them on their new releases: Seth Glier, who is absolutely brilliant and a great producer as well, and the wildly talented Grace Pettis, who sounds like a cross between Loretta Lynn and Brandi Carlile. Our alt-rock band A Fragile Tomorrow is in the studio at the moment and I've been enjoying their rough mixes, as well. Beyond that, I've been listening to Nick Cave, Glen Hansard and St. Vincent a lot lately, as well as new records by Abby Ahmad, Mary Jennings and Dar Williams.

Elvis Costello. He is my #1 now and forever. The most interesting, accomplished, clever and ambitious songwriter on the planet imo. From The Juliet Letters, to Spike to Il Sogno, he is always surprising and listening to his music reminds me why I got into being an artist in the first place, and pushed me to never get too comfortable or complacent as a composer and musician.

The opportunity to express my emotions on stage and to play with fellow inspiring musicians is incredibly rewarding. The fact that this life has also allowed me to travel all over the world and to meet so many different kinds of people – and to learn about other places and cultures along the way – has been a huge blessing and I'm so grateful to be touring again and doing what I love most. I don't take any of it for granted, and hope that people come to our shows they feel empowered to take chances and to embrace their creativity and their passion, in whatever realm.

It can be frustrating trying to balance the business and promotional side of being in the music business with the actual music-making side...and time management is a perpetual challenge, as far as getting enough sleep, exercising and staying healthy let alone having an kind of consistent social life. But I feel most balanced when I'm on stage or in the recording studio, so these are sacrifices I've been willing to make, since a very young age. The ever elusive life/work balance is not something I'm particularly good at...

Make music you love, say yes as often as possible to the opportunity to play live, appreciate every audience like you're playing Madison Square Garden – however large or small – and the rest will fall into place.

2 hours 13 min ago Following on from the enormous praise for her 2019 self-titled debut album, SASAMI is back to ann