Getting To Know... Polly Mooney

Getting To Know... Polly Mooney

Her new single 'Kudzu Kisses' is out now 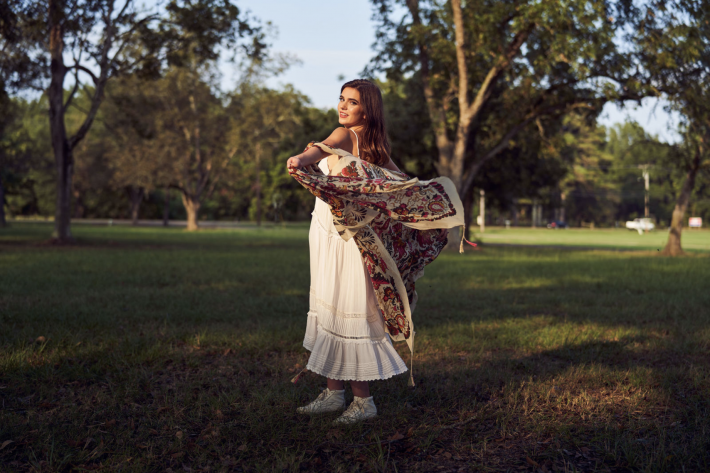 Citing the likes of Maggie Rogers and Kacey Musgraves, as well as classic icons like Stevie Nicks and Joni Mitchell as influences, 'Kudzu Kisses' makes for a wonderfully warm return. Filled with captivating aesthetics, shimmering production, and her own spellbinding voice at the helm, this feels like a strong step forward for her throughout.

Even though I’ve taken piano lessons from a very early age, I would say I first truly fell in love with the instrument of the human voice. I know that may sound silly, but it’s true! I was lucky enough to take vocal lessons from the age of eleven, and it was through that I developed a passion for singing, and learning the science behind good singing. I learned the discipline and technique it takes to sing properly, and because of the specificity that requires, I would say that the voice is an instrument. I’ve always been fascinated with good singers, and really committed to always becoming a better singer myself.

Pretty much the same music I love now that I’m older! My dad would drive me to school in the mornings, and I would consider that when my musical education started. I was listening to U2, Bruce Springsteen, Alison Krauss, Mary Chapin Carpenter, and even Broadway soundtracks from about the age of six. I remember getting myself in a lot of trouble in kindergarten because I physically could not stop myself from humming the music that my dad would play for me in those car rides—and it would be, like, the most intense Arcade Fire song! Like any kid I’m sure I listened to Hannah Montana or whoever was big back then, but what my dad would play for me was always what stuck with me from those days.

I got a record player for Christmas in about the eighth or ninth grade, and I remember my grandfather gave me Norah Jones’ Come Away With Me and The Beatles’ Abbey Road. I would always play those while I was doing my homework in my room after school, and I just fell in love with them. I think it made me into the album lover that I am today—I love listening to full albums in the exact order they were arranged in.

Oh, I feel like I have an ongoing list in my head that’s like hundreds of songs I wish I had written! Maybe the ultimate one for me would be “For A Dancer” by Jackson Browne. It’s a song that he wrote after one of his close friends passed away, and the way that he manages to take those huge feelings and condense it into this summation of life and death and the meaning of both… It's a perfect song. I can’t believe someone was able to write a song like that, and I cry every time I hear it.

Lately writing has been all about self-discipline for me, which sounds boring, I know! Lightning does strike occasionally, and a fully-formed song comes out with no effort over the course of maybe ten or fifteen minutes, but it’s usually not that simple. I sit by the keys or with the guitar, and if I get in the process of writing, I kind of have to hold myself hostage until I finish the song. If I don’t write the whole song in one sitting, that song will never get finished. It’s all about not running out of steam!

Lately I’ve been really into current popular artists like Phoebe Bridgers, who’s really inspiring from a songwriting perspective. Also, I’d be lying if I said I didn’t have the new Olivia Rodrigo album on repeat! There’s so much honesty in both artists’ music, which is really encouraging and cool to me! Also, the new Birdy album has been a great listen.

Another tough question for me! If I had to choose though, I’d probably say someone legendary like Stevie Nicks. Or maybe someone I just really want to be friends with, like Maggie Rogers or Patty Griffin!

I think the most rewarding thing for me has been the experience of not only being someone in music, but being a woman in music. The chance to be someone that younger girls who want to pursue their dreams can look up to is so rewarding, and I take that role really seriously. There’s such a rich community of women who want to empower each other in this industry, and it’s incredible to get to be a part of that! Also, when people send me videos of their little kids dancing to my songs… I mean, come on. Best thing ever!

Probably the self-doubt and sort of “imposter syndrome” that comes with any sort of career in the creative field. It’s no secret that musicians are up against the “struggling artist” stereotype, as well as pressures from society to pick a more conventional job. I think every musician I’ve ever talked to at any level has felt those struggles, and it does make it a uniquely challenging position to be in. It can get you down if you’re not careful, but it can also be a valuable motivational tool if you let it be.

Something my husband (an amazing fellow musician) told me that I think may have been an adapted John Mayer quote… “Both your most-streamed and your least-streamed songs are just as important and exciting as you thought they were on your first day in the studio.” It’s a great reminder in a world where listener counts and streams feel just as defining as Instagram likes and follower counts.

Polly Mooney's new single 'Kudzu Kisses' is available to stream now. Check it out in the player below.

11 hours 22 min ago With her eagerly-awaited new album arriving in the coming months, Martha Wainwright has now dropp

6 hours 41 min ago With the likes of BBC Introducing and Radio 1xtra praising her work over the last few months, Man