Getting To Know... Render Ghosts

Getting To Know... Render Ghosts

Their new single 'Keeping My Number' is out now 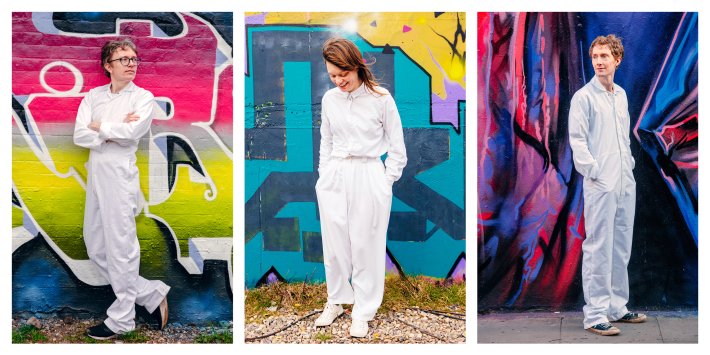 Following on from the release of their breakthrough debut single 'Eye Rhyme' near the end of last year, London-via-Utrecht trio Render Ghosts have now returned to deliver their uplifting follow-up 'Keeping My Number'.

Channelling the same bright and shimmering aesthetic as acts like Metronomy, 'Keeping My Number' makes for a wonderfully sun-kissed listen. With its light and airy atmosphere, bouncing textures, and vibrant hooks layered throughout, this is one we simply can't get enough of right now.

So with the new single available now, we sat down with Iain and Tom from the group to find out more about their origins and what has inspired them most lately.

Iain: Hmm, it’s a toss-up between my radio/cassette player that I could record onto, or the piano. I’m going with the radio/cassette.

Tom: Guitar. Apparently I saw one at a school concert when I was 4 and said “that’s the instrument I’m going to play”. It took me about a decade, but I got there…

Iain: Pop music of all stripes that had strong melodies, including artists whose cred hasn’t yet been re-evaluated, like Erasure, Jellybean, Belinda Carlisle and Level 42, and others who have been, like Paul Hardcastle, Pet Shop Boys. The one that stayed with me the most is probably the album Laughing Stock by Talk Talk.

Tom: My first love was sixties pop, which morphed into a Britpop phase, some of which I’m still incredibly fond of, especially Blur and Catatonia. I was also really into Talking Heads, Nirvana and PJ Harvey. No real common denominator, but I guess I’ve always been attracted to artists who balance strong songcraft with really unexpected/illogical ideas and somehow make it seem like the most natural thing in the world.

Iain: It was probably a Now That’s What I Call Music compilation, but I’m going to claim ownership instead of my sister’s Beatles cassette of Magical Mystery Tour.

Tom: I genuinely can’t remember! But I remember my first single - “Whine and Grine” by Prince Buster.

Iain: This would be a different song if you asked me again in 5 minutes time, but for right now I’ll go for Mexico City by Jolie Holland.

Tom: Yeah it’s hard! Too many to choose from. But maybe “Wichita Lineman” by Jimmy Webb, which contains several of the most exquisite chord changes in pop music history, all in one song. Incredible.

Iain: I like to hit record before I’ve even heard the sound I’ve selected, as those first few notes are usually wild, and not how how I would play after I’ve started.

Tom: I like to listen to something I’ve not heard before while setting up my gear, then try and imitate the style of what I’ve just heard. It always somehow gets filtered through my musical personality and ends up sounding completely different, so I never worry about ripping someone off!

Tom: My favourite release of 2022 so far has been “Blink Blink” by Ben See, which is just beautiful. I’ve also been really enjoying the first few singles from an artist called Folly Tree. I know very little about her, but each single has really impressed me, so I’m super excited that she’s building up to a full-length album. Finally, I’d like to highlight Kit Sebastian’s “Melodi” which was my favourite album of 2021, and which I’m still listening to and discovering new layers in.

Tom: Anna Meredith. Her live shows are just so exuberant and joyful, and I feel like an audience who wanted that kind of experience would be a lot of fun to play for.

Tom: The bit in songwriting where a song suddenly reveals to you what it wants to be, and you feel like you’re being led rather than leading.

Iain: The fact there are other things you need to do, other than writing music.

Tom: The need to self-promote, which doesn’t necessarily sit well with the reasons you choose to make music in the first place.

Iain: Allow your music to reflect your unique self – you’re the only one of you out there.

Render Ghosts' new single 'Keeping My Number' is available to stream now. Check it out in the player below.

10 hours 14 min ago With her eagerly-awaited new remix EP landing next month, Bess Atwell has now shared the next cut

13 hours 9 min ago After an astonishing run of form throughout his releases over the last decade, South African sing