Getting To Know... Teen Mortgage

Getting To Know... Teen Mortgage

Their new single 'Smoked' is out now 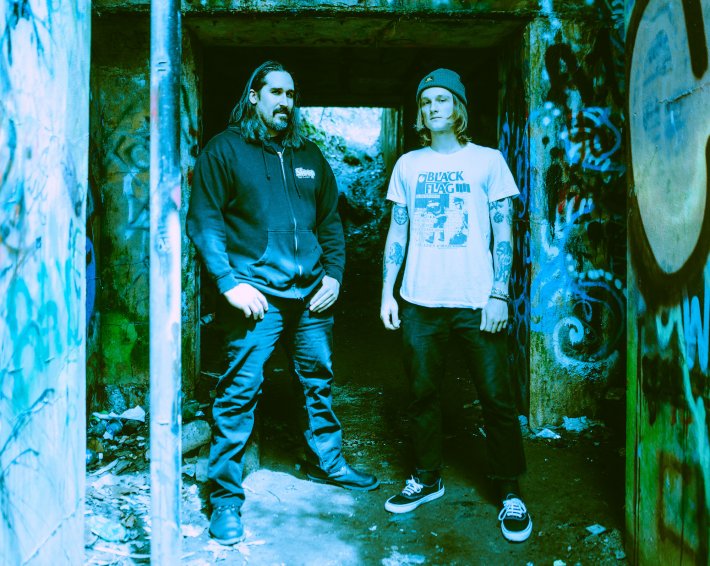 Bringing the same bold and tenacious attitude as acts like Death From Above 1979 and IDLES, 'Smoked' sees the pair return in fine form. Filled with vibrant hooks, killer riffs, and an unstoppable pace, this one will have you pumping your fists from start to finish.

James: guitars, surprisingly enough. Johnny Ramone was a revelation because I knew what he was doing was attainable.

Ed: I taught myself how to play drums in high school. My friend wanted to start a band and I had a year of snare drum ensemble in elementary school, so I was the most qualified available person to fill the slot. I scraped together my own money, bought a shitty used kit for $150 dollars, and joined when I didn't know how to even play a beat. I only started taking lessons once I went to college because I wanted access to a practice room, which turned into a minor in music. The shells of my main Teen Mortgage drum kit are from that first set I've bought, modded and re-wrapped in faux pink fur.

James: Teen Mortgage at our core is a commentary on capitalism.

James: I was fully committed to the indie rock of that era. A lot of Canadian bands like The Unicorns, Wolf Parade, Arcade Fire, Broken Social Scene, etc. I was also really big into The Beatles, 60's guitar bands, and Britpop. I got into heavy stuff later.

Ed: I listened to a lot of nu-metal and prog-rock. I definitely bumped a lot of Deftones, Tool, Cold, Slipknot, Mudvayne, Type O Negative, Soulfly...etc... with more psyche and stuff like Pink Floyd and the Doors towards the end of high school. I was also a bit of a juggalo and rocked everything I could get my hands on by them up through the 6th Joker card.

James: The Beatles playing ''Twist and Shout'' at the 1963 royal variety performance. When John Lennon said “Will the people in the cheaper seats clap your hands? And the rest of you, if you'll just rattle your jewelry." It was a punk rock moment more than 10 years before its time. I was like I wanna do that.

Ed: I feel like I kind of fell into being a musician. I couldn't pick a singular song that made we want to pursue music.

Ed: I listen to the most music when I'm working out. Most mornings, I drink some caffeine and go for about and hour walk around my town and try to run whatever new albums I want to check out. It's a good opportunity to crush unfamiliar material, albums by bands we're going to be playing with, friends' projects, bands people have recommended, etc. When I'm lifting weights, it's a lot of stoner metal and doom.

James: I would imagine all our songs are inspired by a person. People have direct and indirect effects on the way we perceive life, so in some way a person has created a chain reaction where down the line I have written a song about the way I feel about it.

James: One of my favorite moments was when we played a show from a truck bed while driving down 18th St Nw in Washington, DC during the part of the pandemic when restraints did most of their business on the street. Every time we've opened for a band that I've listened to for a long time, that's always so surreal.

Ed: A while back, somebody tagged us in their instagram story. They had just gotten the artwork from our Such is Life single tattoo'd on them. I hadn't prepared any mental response fir the notion someone would connect with Teen Mortgage's music in such a way that they'd permanently alter their body.

Ed: I've been in love with weight lifting since I was a teenager and I will also talk your ear off about it if given the opportunity. I fortunately had been in the process of building a garage gym when the pandemic hit. With our music performance schedule sidelined, most of my time was spent powerlifting.

James: skateboarding for sure.

Ed: I'm currently also a registered nurse, which I got into because it gave me a flexible schedule so I could play music. I don't know if I would have gone into the profession otherwise. I think I might have gone into kinesiology or physical therapy instead.

Teen Mortgage's new single 'Smoked' is available to stream now. Check it out in the player below.

12 hours 57 min ago With their eagerly-awaited new album landing in the coming months, Superorganism have now dropped

16 hours 2 min ago With a bold and blistering array of gems under his belt already, including the breakthrough anthe