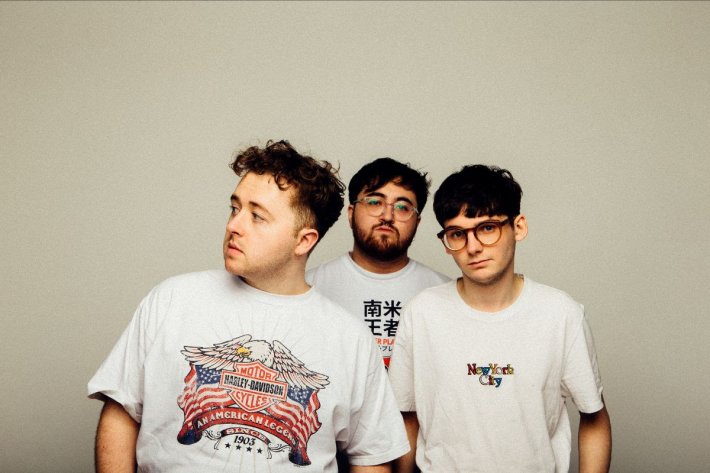 With their highly-anticipated debut album 'Everything Changes In The End' set to drop this Friday 29th May, Edinburgh-based Vistas have proven themselves to be one of the brightest and most promising newcomers of the year so far.

With tracks like 'Summer', '15 Years' and 'Sucker' bringing a much-needed dose of fresh energy to the fledgling indie-rock circuit, this emerging trio are set to become a warm and welcome addition to the British new music scene in the months to come.

So with their debut album nearly with us, we sat down with frontman Prentice Robertson to find out more about their origins and what has inspired them over the years.

Well the first instrument I learned was the violin and I absolutely hated playing it and I only really fell in love with music when I started playing the guitar, so would have to go for the guitar on that one. I thought it was so cool being able to play along to songs that I liked and it was really satisfying when I started to get the basic chord shapes nailed.

I tend to write about what’s happening to me in my life or what I’m thinking about in that individual moment. A lot of the songs on the record are about the transition period from your last teenage years into early adulthood which essentially documents the time from when Vistas started to now.

I really liked guitar based indie as a teenager (and I still do now!). I was really into The Strokes, Arctic Monkeys, Two Door Cinema Club, The Killers, Kings of Leon and of course The View.

I was first inspired to start writing songs after listening to The View’s debut album. I thought it was amazing hearing Scottish accents on the radio and seeing their CD’s in shops and it just made me really want to try to be in a band and write songs. Without that I maybe wouldn’t have got into songwriting and just stuck more to playing. Some highlights from that record for me and ‘Face for the Radio’ and ‘The Don’.

At the moment I’m just fishing out a random record from my collection and sticking it on in the background while I have breakfast and get ready. It’s nice having some familiar stuff in the background that you don’t have to focus on super intently.

Most of the songs are about someone in my life, whether that be my family, girlfriend or friends, I think the majority of the songs relate back to someone in some way or another.

There’s honestly been loads. A few highlights would be some of our big headline shows like St. Lukes in Glasgow, Dingwalls in London, The Academy in Manchester and La Belle Angele in Edinburgh. But honestly I remember pretty much all of our headline gigs really fondly. They mean so much to me because the people at those shows really want to be there and connect to your music.

At the moment probably gaming, but that’s probably because we’ve got loads of time on our hands. I’ve been playing some of my old consoles from when I was a kid so that’s been a nice walk down memory lane.

I honestly don’t know. I’ve lived and breathed being in a band since I was about 14 and I’ve never really had a plan B so it’s not something I’ve ever prepared for. I like selling merch after our gigs so maybe I could do that.

Just take it easy, don’t stress if you don’t feel particularly like writing because it’s a difficult time to solely focus on being creative with everything going on right now. Good ideas will come if they aren’t forced.

Vistas' debut album 'Everything Changes In The End' is out this Friday 29th May via Believe. Check out the new video for their latest single 'Summer' in the player below.

6 hours 22 min ago With their highly-anticipated new album set to drop in the coming months, The Flaming Lips have n