Her new single 'When I Want It' is out now 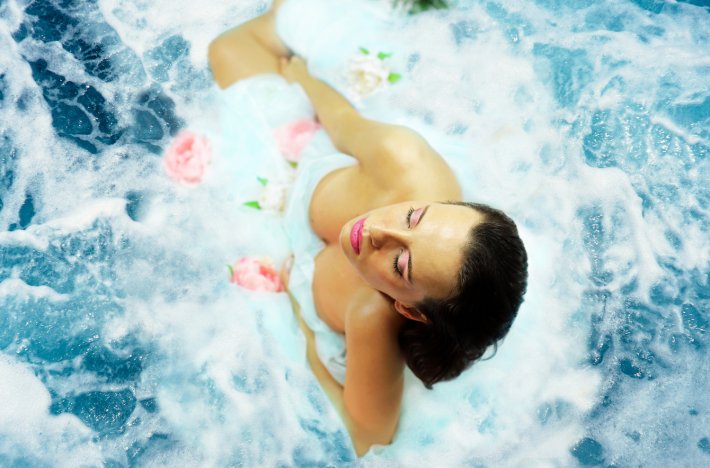 Having already made a bold impression with her releases of late, Russian artist Zaritza recently returned to share her atmospheric new single 'When I Want It'.

With its broad and textured nods to the trip-hop and electro-pop sounds, 'When I Want It' sees her take another impressive step forward. Filled with rich soundscapes, sweeping production, and her own tranquil vocals at the helm, her latest effort adds yet another captivating anthem to her growing repertoire.

So with the new single out and about, we sat her down to find out more about her origins and what has been inspiring her recently.

When I first saw an acoustic piano in my kindergarten, I developed an immediate curiosity of this big box with black and white keys, and when I touched those magical keys, I was hooked instantly. I don’t think I’ve ever been that kind of a kid who wanted to just bang on keys, I was very gentle and kind as if I almost knew that this big wooden construction would become my best friend for many years ahead.

I grew up listening to a variety of music that enriched my life and influenced my own creativity. Much of the music was, of course, Russian, including traditional folk music and the great Russian classical composers -- Tchaikovsky, Shostakovich, Stravinsky, Prokofiev and, by far my favorite of all classical composers, Rachmaninoff. In addition, my father introduced me to American or British pop or rock n' roll music, ranging from the Beatles to Motown to my all-time favorite rock band, Queen. Western pop music started showing up on my horizons later as well with different inspirational artists like Michael Jackson, Kylie Minogue, George Michael, Mylene Farmer and many others.

I believe it was Madonna’s “Bedtime Stories”. While I was still actively studying at both music and dance schools, I discovered Madonna and pop music became one of my favorite genres throughout my teen years. I would choreograph my own routines to her music, write simple pop melodies that would eventually form into fully developed songs that I could sing and play on piano. She was certainly one of the biggest influences on my creative world while growing up in Russia.

‘Talk Show Host’ by Radiohead which I included in my self-titled debut album in 2017. Since I heard it back in 1995 in the movie ‘Romeo and Juliet’, I was mesmerized right from the first notes. The whole vibe of the song seemed to connect to me in a very organic way. When I started covering it in my live performances, it felt so natural to sing it, move to it, create my own sonic interpretation of this beautiful tune like it would be my own song. Till this day this song still haunts me in the most magical way.

The initial spark of a song idea usually comes in the form of a melody or chord that caught my ear while just playing around and exploring at the piano. Mostly, I start with writing music first that has no specific meaning to me yet until I dive deeper into the vibe and follow my natural instincts. Sometimes I don’t know what this idea really means for weeks or even months, I just keep playing it on my piano, in my head, letting it soak through my body, and then “boom”, a lyric comes out of nowhere and drives this traveling boat to a dock. Some of my best ideas even appear in a dream while I'm asleep, so I always keep my iPhone nearby in order to capture them by humming a few of the notes into a recording app. It’s truly special to experience how you can plant a simple seed of a story idea and nurture it into a fully developed music narrative!

Sevdaliza and Everyone You Know have been on repeat for weeks now. Such extraordinary unique musicians!

I’ve always dreamed of being on the same stage with Radiohead. Thom Yorke is one of the most enigmatic performers I’ve ever seen! He transforms into something unworldly, almost untouchable, through the immersive energy of his soundscapes. It’s an exceptional feeling to witness his mesmeric stage presence, to be alive like nowhere else.

I knew from early on that I was meant to express myself through music and dance; it wasn't even like I had a choice -- no other activity or interest ever really crossed my mind. I believe music is the most profound and transcendent form of human creative expression: it reflects and enhances the full range of emotions and how we experience life, from small moments to significant events, and it can reach across, and connect, all cultures and generations (from a new pop song that's a hit with kids all over the world to a centuries-old classical piece that still sells-out concert halls today). To me, music is the most healing power, the one that can fundamentally change your life for better!

Being a woman in a music industry is still a big challenge! We are not allowed to be independent, empowering and self serving without meeting a mass criticism. There are plenty of male artists that objectify, sexualize women in their music videos, but, when a woman expresses her sexuality in a very confident way, she immediately is ridiculed, perceived as a bad role model or even worse. These double standards only continue to suppress women from being their true selves and having confidence in who they are.

I think being authentic always mattered to me, so I try to embrace who I am and to never doubt it! That’s the only way you can truly connect to others.

Zaritza's new single 'When I Want It' is available to stream now. Check it out in the player below.

2 hours 3 min ago Having spent the last few years building up his repertoire of sweet and sweeping delights, US sin